If you’ve ever shopped for gaming headsets, you know how difficult it can be. Not only are there a ton of different features you need to look for, but you also need to decide whether you want a wired or wireless device. And when you do find one you like, there’s a good chance you’ll have to spend hundreds on it.

Fortunately, there are a number of mid-budget gaming headsets on the market that make it a little bit easier for you to make your decision. The Logitech G933 is one of your many options when it comes to mid-range gaming headsets. If you’re on the fence about investing your money in this gaming device, check out our review to learn more about its features and how they stack up to those of other popular gaming brands.

What Is a Gaming Headset?

With the popularity of online games like Fortnite, having a headset to talk to your party is often an integral part of gaming. Many of the early headsets used for online gaming were low quality and made it difficult for party members to hear each other, but that technology has slowly improved. The release of the Xbox 360 gave us gaming headpieces like the early Turtle Beaches which initially provided the ability to listen to both game and party sounds through one headset.

The creation of game and party volume headsets was a huge step in the gaming world. With audio cues such as enemy footsteps becoming an increasingly important part of many competitive and single-player games, the need for headphones has grown significantly. If you’re playing a competitive online game like Fortnite, Halo, Gears of War or Call of Duty, hearing the exact direction that enemy footsteps or bullets are coming from is crucial to taking your skill to the next level.

Of course, gaming headsets offer a range of other features too, such as increased comfort, easy-to-use controls and G-keys, and noise-cancelling microphones that are designed to pick up only what you want them to pick up.

Logitech makes all sorts of different computer hardware, from mice and keyboards to controls, speakers and headsets. The Logitech G933 is one of the best gaming headsets you can find brand new for less than $200, offering a sleek, gaming-inspired design and all sorts of great features that make it a solid option for gamers.

While this headset does feature 7.1 surround sound, it appears to be some form of simulated 7.1 rather than true 7.1. This will still give you an advantage over people who are using a regular stereo headphone but simulated 7.1 surround sound will never be able to hold a candle to true 7.1. Aside from that, the G933 gaming headset gives you powerful Pro-G audio drivers which are designed for superior sound quality and customizable sound profiles so that you can use your G933 for anything.

As is the case with many Logitech gaming headsets, the G933 headphones doesn’t actually specify driver size. Instead, the only thing we know about it is that it uses Logitech’s Pro-G audio drivers which are made to give you clear, powerful sound. The hybrid mesh cover on the drivers keeps them safe while ensuring you still get powerful bass and clear sound quality.

There are some other things that make the Logitech G933 headset a bit different from its competitors as well. The G930 model used artificial leather in its earcups to make them soft and smooth to the touch. The G933, on the other hand, uses cloth earcups which serve two important purposes. Firstly, they aren’t as prone to tearing as leather. Secondly, they won’t cause you to sweat.

While any microphone will do when it comes to simply talking with your teammates, a nice microphone can be the difference between a crucial callout going unheard or one recieved. However, the truly important part of a gaming microphone is noise cancellation; the last thing you want is to bombard your teammates’ ears with sounds of your TV, music, or people talking in the background.

The Logitech G933 headset features a 4mm unidirectional cardioid microphone that ensures nothing but your voice gets picked up. A frequency response range of 100 Hz to 20 KHz prevents coughs, breaths, table bumps and other small noises from being picked up, too.

As far as battery life goes, this headset gives you a slight upgrade from the Logitech G930 model. According to Logitech, you can expect to get about 12 hours of battery life from the G933 headset when it’s brand new. It’s important to note that since this headset uses rechargeable batteries, they will get weaker over time. Don’t be alarmed if you notice your gaming headset is only lasting half as long as it once did after years of heavy use – this is all a completely normal part of the process.

The Logitech G933 gaming headset is absolutely amazing when it comes to technology, but there are some areas that could use some improvement. The Dolby 7.1 Surround Sound in these headphones is simulated, which means it won’t quite match the quality of a true 7.1 headset in terms of letting you know where audio cues are coming from.

A big bonus of this headset is its multiple source audio mixing which allows you to connect one USB device and two analog devices, so you can listen to phone calls or music while you’re playing. And since this model works with nearly any device, this is a big benefit.

Regarding design, the Logitech G933 is great if you want the gaming look. The large, rectangular shape of the earcups is great for both comfort and style, and the padded headband adds to it in both regards. The fact that you can choose between a black, white, or blue and white version further stylizes this headset, and the customizable RGB lighting allows you to give your headphones a look that’s uniquely yours.

The price of the Logitech G933 gaming headset is very fair for what you’re getting. While many high-end gaming models will cost you hundreds, especially if you want access to features like wired and wireless capabilities and programmable G-keys, the model G933 has a fairly reasonable retail price of $199.99. However, Logitech is currently offering the black version of the Logitech G933 for just $139.99 on its website. Even better, you can find brand new listings for the Logitech G933 on Amazon for as low as $127.99 for the black version and $134.99 for the white.

While these aren’t necessarily the lowest prices you’ll find on a simulated 7.1 gaming headset since the HyperX Cloud II is competitively priced at about $95, the inclusion of multiple source audio mixing, customizable RGB lighting, and programmable G-keys make the Logitech G933 a fairly large upgrade from most cheaper options. If you’re looking for the most bang for your buck, opting for the G933 is never a bad idea. 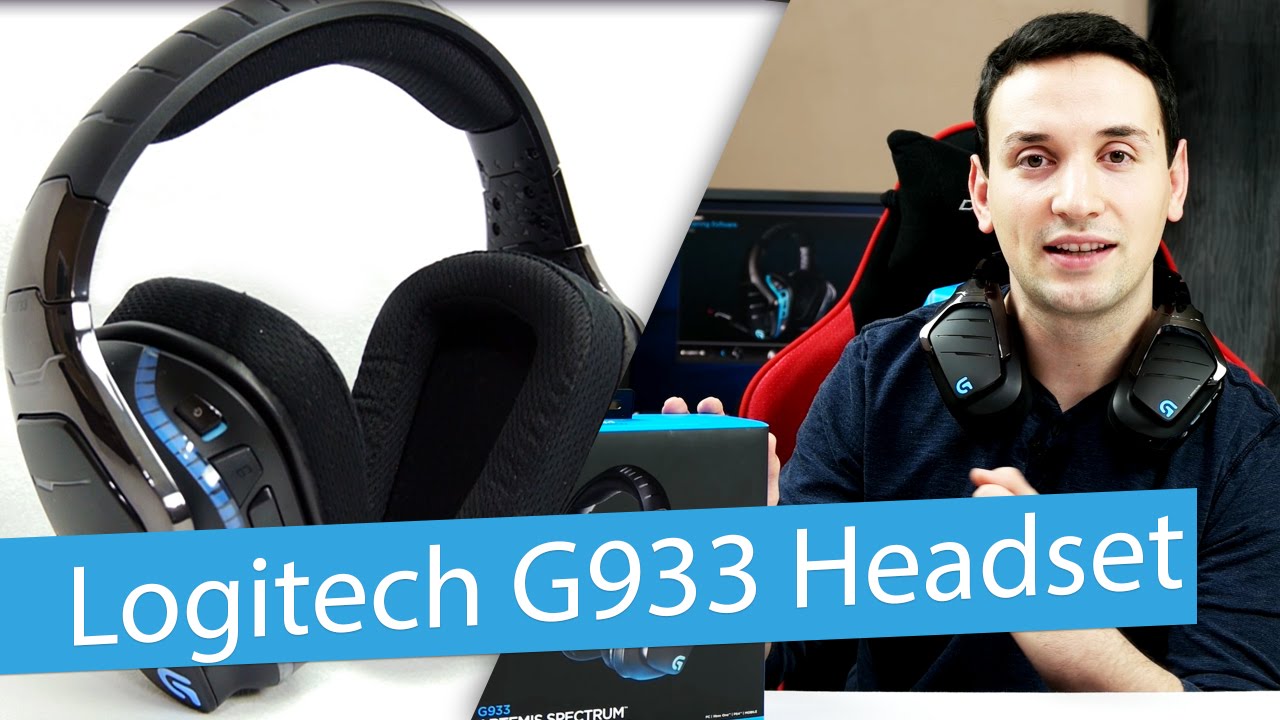 How the Logitech G933 Compares

With all the great features this headset offers, it would be easy to simply order your own G933 and call it a day. However, that would be doing a disservice to all the other great gaming models on the market. And who knows? Maybe there’s another headset from a different brand that offers a design or features you like more.

The Razer ManO’War is probably our closest competition to the Logitech G933 in terms of both price and features. If you prefer the design of this headset, it’s a suitable replacement.

Drivers: 50mm drivers in the Razer ManO’War 7.1 give it powerful sound that rivals any headset in this price range.
Dolby: The Razer ManO’War offers 7.1 virtual surround sound, which is exactly what you should expect from a headset like this one.
Design: Although this headset only comes in one color, you can customize it with RGB lighting like the G933.

One of the best budget gaming headsets on the market, the HyperX Cloud II offers amazing features for its price despite falling behind other popular models in some regards.

Drivers: The 53mm drivers in the HyperX Cloud II headset are some of the largest on the market.
Dolby: Just like the Razer ManO’War 7.1 and the Logitech G933, the HyperX Cloud II offers virtual 7.1 surround sound.
Design: You get your choice of colors with red or gunmetal, but with no RGB lighting makes this a less customizable headset than the others.

One of the best headsets on our list in terms of both price and design, the model SteelSeries Arctis 3 offers everything you need.

If you’re looking for the headset that gives you the best value without sacrificing on design, the Corsair VOID PRO RGB gaming headset may well be the best option we’ve given you.

Drivers: 50mm drivers in the Corsair model give you the powerful sound you expect when you’re in an intense battle.
Dolby: While it’s nearly impossible to find a true 7.1 headset for less than $200, Corsair claims it uses “genuine Dolby Headphone 7.1 surround sound” in its Corsair VOID PRO RGB model.
Design: RGB lighting allows you to customize this headset however you want, which is nice since it only comes in one somewhat-bland carbon color.

The Verdict: Powerful Performance at a Low Price

All in all, the Logitech G933 gaming headset is a solid gaming unit if you’re looking for something that isn’t too expensive but still offers you an upgrade over a $30 Turtle Beach device. Between the powerful speakers, simulated 7.1 surround sound, multi-source audio mixing and customizable RGB lighting, you won’t have a whole lot to complain about with the Logitech G933 headset. And thanks to its $139.99 price, your wallet will be happy too.