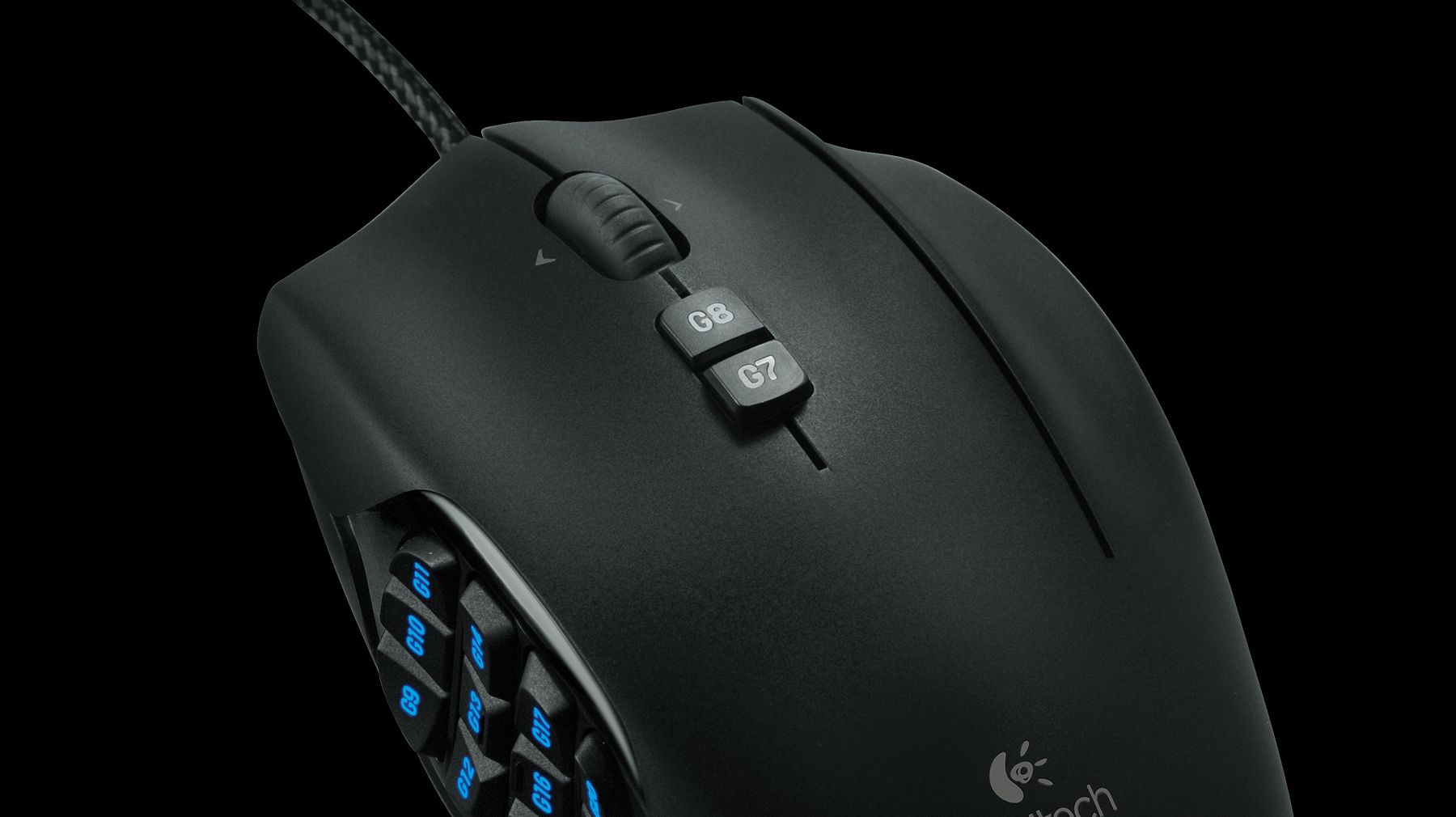 Gaming on a PC is a lot different from playing on a console. For starters, PCs are capable of running games with higher graphics settings and framerates. However, switching from console to PC means you lose a lot of buttons for your right hand to use, and a good gaming mouse with additional buttons is the only way to get that added functionality back.

If you’re playing a first- or third-person shooting game, then you probably want a mouse with few buttons so you don’t accidentally hit the wrong one. However, MMO players need lots of buttons to map all of their spells and attacks, which is exactly why Logitech made its G600 gaming mouse. If you’re in need of a new MMO gaming mouse to complete your dream PC setup, then take a look at our Logitech G600 review.

What Is an MMO Mouse?

You need different types of mice for different computer functions. A quiet, ergonomic mouse that doesn’t cause pain in your hand is perfect for work, but it doesn’t offer the features you need for gaming. A gaming mouse has programmable buttons, higher DPI settings, more precision, and better construction that often includes a braided cable for durability. As great as all of these features are, you need to narrow your search down even further depending on the type of game you play—whether you love battle royale games such as Fortnite or MMOs such as World of Warcraft.

People who play shooting games generally prefer a simple mouse that is designed for precision and speed. If you play an MMO, however, then you need to be able to map a lot of different functions to your mouse since your keyboard has limited space. That’s where an MMO gaming mouse comes into play. MMO gaming mice are designed with a lot more buttons to allow you to map more spells and other functions. This makes them a bit bulkier than regular gaming mice, but they’re pretty much the same in all other regards.

You might know Logitech from the keyboard-and-mouse bundle, webcam, or PC headset you bought at Walmart more than a decade ago. As it turns out, Logitech makes a lot of high-quality stuff, too. For as long as PC users have been enamored with finding the absolute best hardware for their computers, Logitech has been making top-level products. In recent years, the Logitech G series of gaming hardware has become one of the most popular choices for gamers all over the world. In fact, there are a number of pro gamers who choose Logitech mice over all of the other top brands on the market.

The Logitech G600 is an MMO gaming mouse that falls somewhere near the lower end of the Logitech G series in terms of price, but not performance. Despite costing well under $100, the G600 gives you many of the features you need in an MMO gaming mouse, including lots of programmable buttons, customizable lighting, an easy way to switch your DPI, and more. While it’s got a pretty standard shape and set of features overall, there are a few minor tweaks that make this a better choice for some.

Like any good MMO gaming mouse, the Logitech G600 has plenty of buttons. You have fairly standard buttons on the top of the mouse, including left and right clicks, a scroll wheel with tilt functions, two G-keys, and the G-shift button. The left side of the mouse features 12 G-keys, so you can map the rest of your functions without worry. These side-panel G-keys can be customized via the lighting software included with this mouse.

The dual-dish design of the side G-keys is a bit of a double-edged sword. You might love the way this design feels, or you might not like it much at all. One thing’s for certain: Having a noticeable shape difference for each half of the G-key pad helps you determine which key your thumb is on.

In terms of feel, the Logitech G600 may be one of the best mice for large hands. The G-keys are on the left side of the mouse and are designed for thumb presses while the G-Shift button on the right adds some bulk. So this mouse is a great choice if you are a palm-grip player or have bigger hands. If you tend to grip the mouse a bit tightly, then you might want to consider disabling the G-Shift key.

Ultimately, feel is a hard thing to talk about when reviewing mice. The only way you can know how something feels is to try it out for yourself at a local shop. Brick-and-mortar stores are the best places to shop for mice, provided you have a shop in your area that actually sells gaming hardware.

One thing you’ll notice on the Logitech G600 is the large button on the right side of the mouse. This button is called the G-Shift button, and it’s designed to do a couple of different things. Firstly, you can use the G-Shift key to double the number of usable buttons you have. To do this, you have to set a second function for each G-key. When you’re holding the G-Shift button down, all of your G-keys will use their secondary function.

The other thing you can use your G-Shift button for is quickly switching among different DPI settings. DPI is essentially the mouse’s sensitivity, so switching to a higher or lower DPI is extremely helpful in games that call for it.

Logitech always does a good job of designing its gaming products, and the Logitech G600 mouse is no exception. From the top, this mouse has a pretty standard look aside from the G-Shift button on the right side that gives it a bit of extra bulk. The entire top of the mouse is a nice matte black color that is fingerprint and scratch resistant. The braided USB cable is also black, which gives the mouse a nice, cohesive look.

While the G600 looks fairly normal from the right side, the view from the left side is a bit different. The matte black body of the mouse splits to make room for a glossy black plate that holds the G-keys. The G-keys themselves have a double-dish design that makes them feel like two separate sets of six keys. For a little bit of added style, you can use LIGHTSYNC technology to customize the color of the G-keys on your G600. As is usually the case, you can choose from around 16.8 million colors for this RGB lighting. You can even set up three profiles with up to three different modes on each.

When it comes to convenience, the most important feature in a gaming mouse is definitely the G-keys. But seeing as there are tons of mice on the market with just as many G-keys as the G600, we’re going to talk about the other convenience features this mouse offers.

The G-Shift button allows you to switch your DPI quickly from as low as 250 to as high as 8,200. If you keep your DPI the same at all times, then you can use the G-Shift button to double up on your G-key functions. The G600 also allows you to quickly load up the profile you need whether you’re playing an MMO or a first-person shooter. Unfortunately, it doesn’t look as if you can create G-key profiles with the G600, so you’ll have to change your settings as needed.

The Logitech G600 is one of the most affordable MMO mice on the market despite the wide range of features it offers. Logitech currently has the G600 gaming mouse priced on its website, but a quick Google search will bring up some slightly better deals. However, even the full price tag on Logitech’s website is pretty great for an RGB gaming mouse with switchable DPI and 20 programmable buttons.

How the Logitech G600 Compares

In a lot of ways, the Logitech G600 is a standard MMO gaming mouse — but that’s not a bad thing at all. This is a mouse from one of the top manufacturers of PC gaming hardware, and it has pretty much everything you need in a mouse if you play MMOs. However, you do have other MMO mice to choose from in this price range, so here’s how those mice compare to the G600.

Though it’s a bit more expensive, the SteelSeries Rival 500 is a good alternative to the G600 if you have smaller hands.

ROCCAT is a lesser-known brand that makes some really innovative gaming hardware, including the ROCCAT Kone AIMO gaming mouse.

Buttons: This mouse has a total of 23 programmable buttons.

RGB Lighting: There are four independently customizable RGB zones on this mouse.

Corsair’s entry into the MMO gaming mouse market, called the Corsair Scimitar Pro, is what you’d expect from one of the top gaming hardware manufacturers.

Buttons: The Corsair Scimitar Pro has just 12 programmable buttons, which is a bit disappointing.

Sensitivity: A maximum sensitivity of 16,000 DPI makes this a great mouse no matter what you’re doing.

RGB Lighting: The Corsair Scimitar Pro has customizable RGB lighting that you can set via the included software.

Razer is one of the top manufacturers of all different types of gaming hardware, so it would be hard to make a list of gaming mice without having a Razer mouse on there — especially the Naga.

Buttons: The Razer Naga Chroma features a total of 12 buttons.

Sensitivity: You can adjust your DPI to up to 16,000 with this mouse, making it a top choice.

RGB Lighting: Customizable RGB lighting with your choice of 16.8 million colors gives you ultimate control over the lookk of your Naga.

The Verdict: An Excellent Mid-Range Mouse for MMO Players

If you’re looking for an affordable mouse with lots of buttons and easy DPI switching for MMOs, then you’re probably having a tough time. The Logitech G600 satisfies just about every requirement for an MMO mouse at a price, which may be the best value you can find. The biggest downside to this mouse is its maximum DPI of 8,200, although that’s really not an issue since most gamers stay below 2,000 DPI. If you play MMOs such as World of Warcraft or Black Desert Online and need a mouse to take your gaming experience to the next level, then the Logitech G600 will offer you just that at a price that is significantly lower than many of its competitors’.

GPUN Administr@tr
Related Itemsbest logitech g600logitech review
← Previous Story Micro-ATX vs Mini-ITX: What is the difference?
Next Story → Snowball Mic: Is This USB Microphone Worth Your Money?