Portability is king when it comes to laptops but often times you have to sacrifice on quality to cram all that technology in such a little space. With their lightweight, compact size, and wide variety of features this list of the top 11 inch laptops should have something for everyone . Included are budget options starting at around 170  with some small compromises on screen quality, storage or performance but nothing too major. 600 dollars and above will get you a powerful laptop rivalling some of its larger contemporaries without being too bulky. In between those two we have hybrid 2-in-1 laptops equipped with touch screen features that offer a nice middle ground between affordability and performance. If you’re certain you want to purchase an 11 inch laptop, then this guide has been put together just for you so you can find the best device for your needs and budget.

A super thin and lightweight laptop coming in at 0.7 inches while weighing just 2.5 pounds, the Samsung Chromebook 3 XE500C13-KO2US is a budget 11 inch laptop without a lot of issues.. Coming with Google’s Chrome OS, their lightweight variant of Linux, this laptop has been specially built for a very user friendly experience. With a 16GB SSD combined with the already fast boot up times of Chrome OS you can have boot times around 8 seconds which is great when you need to take some notes or send an email quickly. The small storage space is countered by Google offering 100GB of free storage on their Drive platform for anyone with a new Chromebook, along with movie and music freebies. However if you’re in love with apps like Microsoft Word or Adobe Photoshop you’re going to be disappointed as Chromebooks don’t have support for them. With a battery life of up to 11 hours, you should have more than enough juice for watching plenty of cat videos or web browsing in general.

All in all the Samsung Chromebook 3 XE500C13-K02US isn’t pushing any technological innovation but is one of the better 11.6-inch Chromebooks on the market considering it’s cheaper than most of the others without sacrificing on a lot of features. Perfect for any students or users just wanting a cheap web browsing platform that isn’t a smartphone, you can’t go wrong with this laptop. 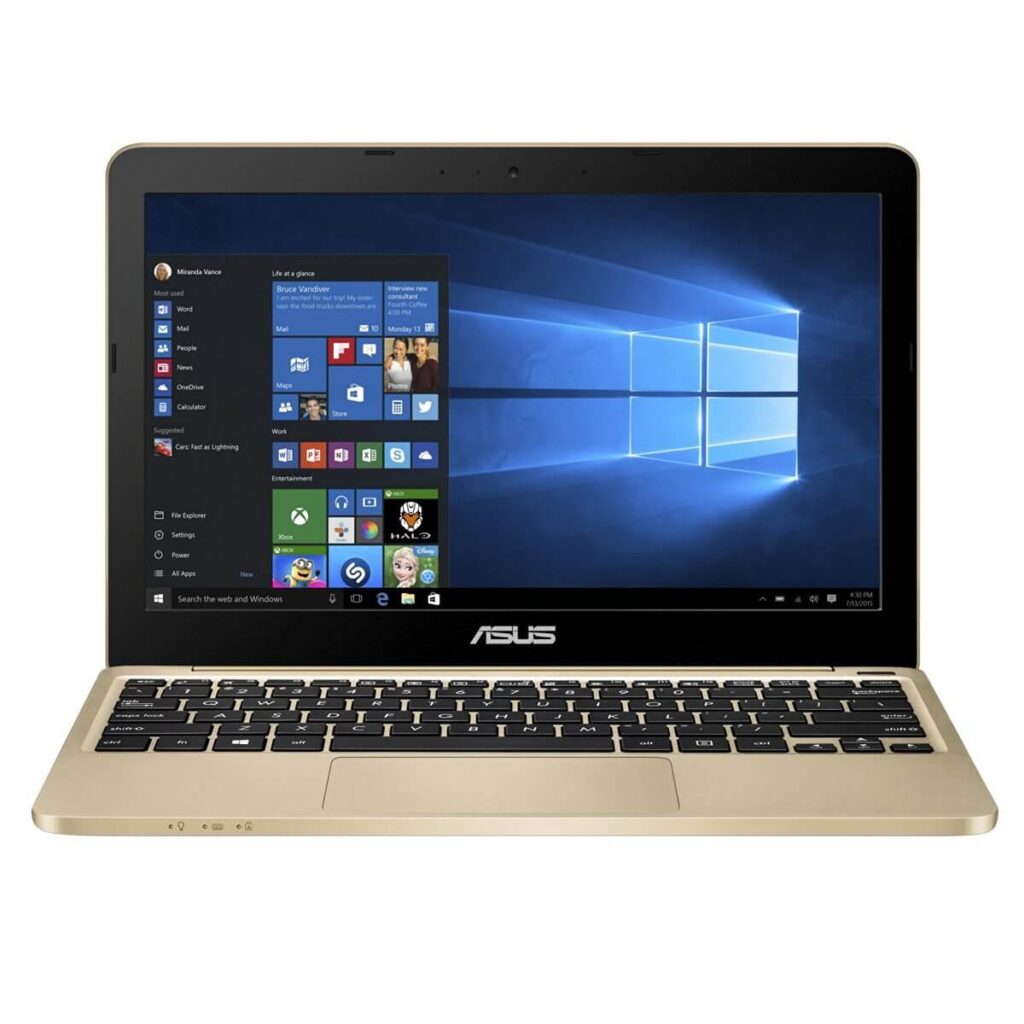 Another budget 11 inch laptop, the ASUS E200HA isn’t flashy but is reliable and long lasting. Coming with Windows 10, 32GB of storage and a 1 year subscription to Microsoft Office 365 which includes a variety of programs like Word, Excel and Powerpoint, you should have everything you need to impress your boss with a nice business proposal. A full sized keyboard and large trackpad should make typing and navigating through programs fairly easy, although the keys are slightly cramped. Battery life is extremely good at almost 12 hours which is amazing for those long flights or road trips. A couple minor annoyances need to be mentioned though. One of them is the soft plastic outer casing on the back which can be scratched fairly easy but can be solved by buying a case. Another is the screen can get dark to the point of unseeable at certain viewing angles which can be inconveniencing if you are in a public space such as a plane where you might not be able to angle it properly. Disappointingly this one doesn’t have a solution so you’ll have to be mindful of this if you choose to buy this laptop.

An Intel Atom Z8350 1.44 GHz processor and 4GB of RAM aren’t going to do fancy video editing or blow you away with it’s speed but the ASUS E200HA is still a good 11.6-inch laptop if you value reliability, battery life and budget friendliness. 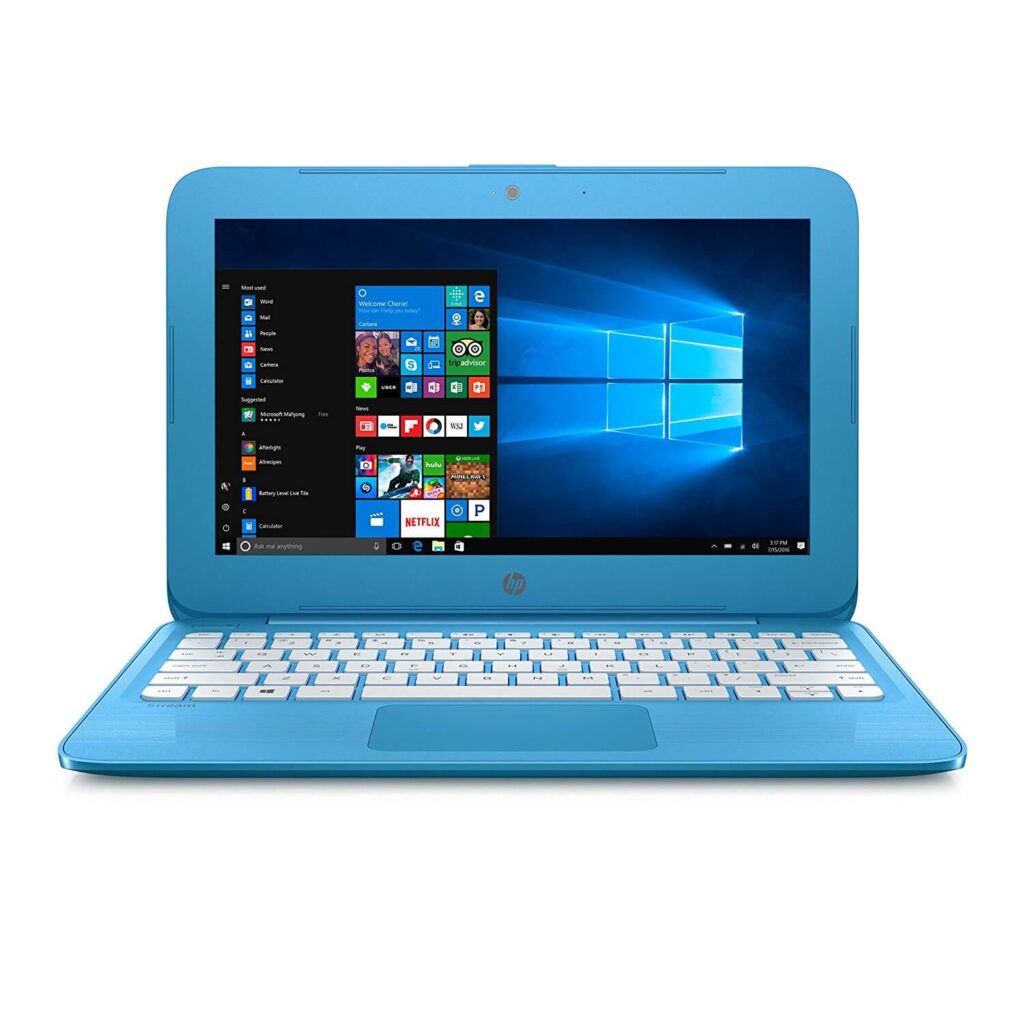 Coming in at around 189 USD this budget friendly 11 inch laptop combines long lasting battery and a great feeling keyboard with a very sleek white on blue design. The keyboard is smartly spaced and doesn’t feel super mushy like some other laptop keyboards can. Again as with the other budget laptops on this list there is a storage issue. Coming equipped with a 32GB hard drive it won’t be long before you run into a problem. Luckily HP has included 1TB of cloud storage on OneDrive with all brand new HP Stream 11 laptops, along with a subscription to Microsoft Office 365 for one year. It also has microSD support for expandable storage. The battery life isn’t superb coming in at around 8 hours but it also charges quickly, going from dead to 25% in about half an hour so it’s not as big a problem. While I wrote about how good the keyboard is, the trackpad is another story. It can sometimes be slow to respond and feels a little cheaply made, bending when clicking down a little too hard. The two major complaints about the HP Stream 11 are boot up speeds and the screen. Boot up speeds can range from 30 seconds to a minute which is very inconveniencing when you don’t have a lot of time or patience. As for the screen it has some glare problems even though it claims it has a anti-glare screen. It also doesn’t get as bright as you would probably like but screen quality is something you usually have to sacrifice with these smaller, cheaper laptops.

With an excellent keyboard, decent battery life and only a few negatives, the 11 inch HP Stream 11 is a great fit for any students or writers on a budget. 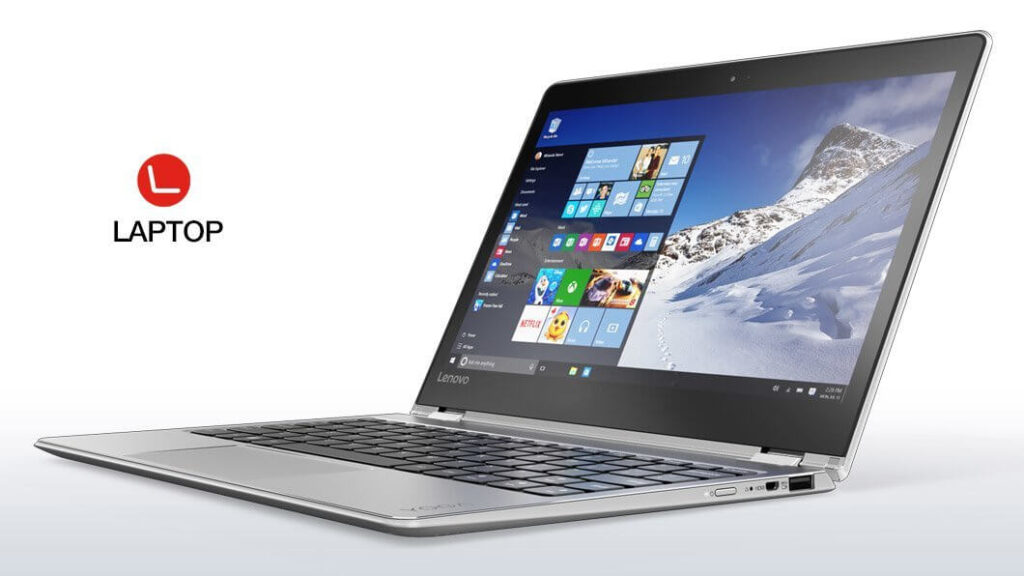 A 2-in-1, the Lenovo Yoga 710-11ISK combines the features of a 11.6-inch laptop with a tablet for a variety of uses. One of the higher end products on this list, we have some great features and a couple that might leave you frustrated. Starting off features wise, we have a 128GB SSD with 4GB RAM for speedy boot up times with enough RAM to handle a decent amount of tabs or videos. A battery life of around 12 hours should keep you browsing or working throughout the day without having to find a power outlet. Also nice is the full HD screen at 1920×1080 resolution, although a problem with tint regarding white objects appearing darker than they should is a little disappointing. The biggest issues with this laptop are the keyboard and heat problems. The keyboard is a little cramped, isn’t backlit and just isn’t that satisfying to use for typing. Like the name implies though, the Yoga easily bends backwards into tablet mode if you want to use the touch screen for web navigation. As for the heat this laptop doesn’t have any fans in order to make it as low profile as possible. This can lead to it getting a little hot and uncomfortable for your lap over extended periods of time. With those minor complaints out of the way, this 11.6 inch laptop has some features of the higher end laptops on this list with a more budget friendly price tag.

With a sleek, minimalistic design available in either silver or metallic black and pros that outweigh the cons, the Lenovo Yoga 710-11ISK definitely channels some good vibes. 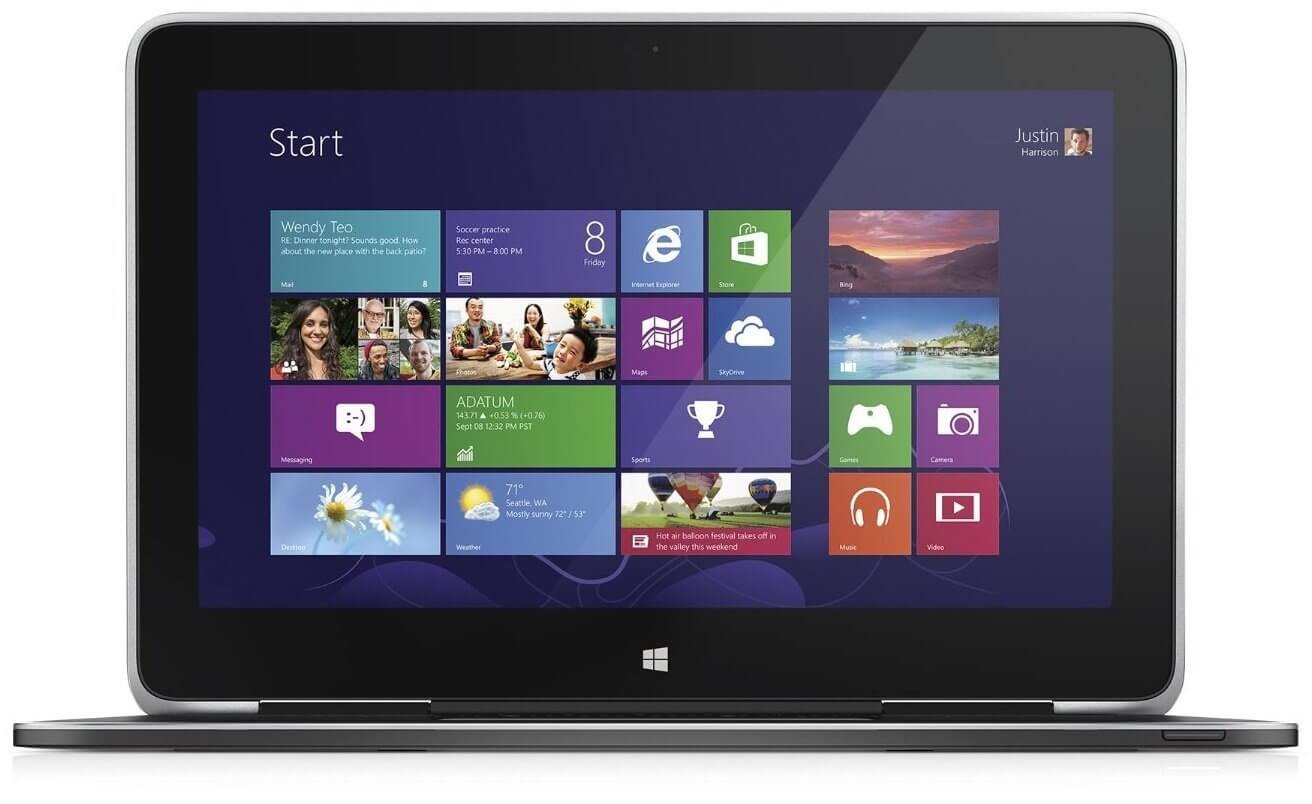 Similar to the Lenovo Yoga 710-11ISK, this 11 inch 2-in-1 laptop really only has one flaw. It manages to be super lightweight and thin weighing in at 2.5 pounds and 0.6 inches at its thickest, while not compromising on build quality. Made out of aluminium and carbon it definitely feels much more sturdy than plastic. The hinge is a little looser feeling than the Yoga when in kiosk mode but it’s minor and it has smoother transitions. The screen is probably the best screen on this list. It gets very bright so you should have no problems with that, Gorilla Glass makes it resistant to a fair amount of damage and a stunning 2560×1440 resolution with Intel HD Graphics 4200 make everything crystal clear. It’s also pretty glare resistant so you can even take it outside if you desire. A very troublesome flaw however is the absence of a traditional keyboard. Instead of a tactile keyboard you basically get a touch screen with keys that are “cut” into the laptop. There isn’t any feedback aside from a clicking noise which can take a while to get used to and typing speeds will likely be slowed down while you learn to adapt.

If the stunning screen is something that appeals to you and you’re not dissuaded by the lack of a physical keyboard, the Dell XPS 11 is a great 11 inch hybrid laptop if you’re not sold on the Lenovo Yoga 710-11ISK. 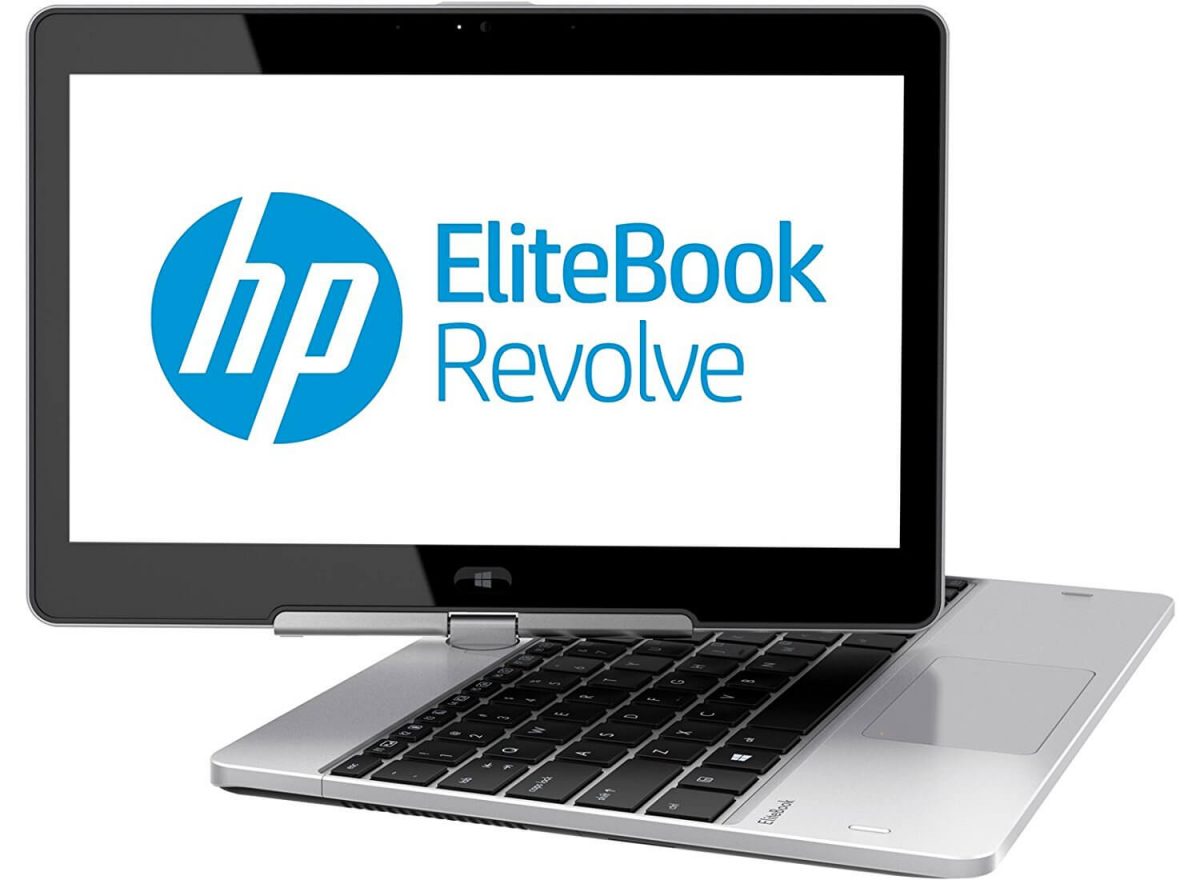 Similar to a 2-in-1 but not quite, the HP EliteBook Revolve 810 is a rugged, durable hybrid with some amazing specs and two major issues. Instead of bending over backwards or having a removable keyboard, this laptop has a 1366×768 screen that simply revolves. Also equipped on the screen is Gorilla Glass so it should be resistant to some drops and scratches but don’t go out of your way to treat it rough. As far as those amazing specs go we have a 256GB SSD, 8GB of ram and a 3rd generation i7 Intel processor. With these specs this laptop should be able to handle most of what you throw at it short of heavy video editing or things more suited for a powerful desktop. It’s not all roses with this laptop though. It’s quite expensive, most likely running you over 700 dollars but with those specs that’s to be expected. Another big deal is the battery life. Running out of power in about 5 hours is a mixed bag. On one hand you won’t be using it on a plane or similar long trip (at least not without a recharge) but on the other those 5 hours are likely to be some of the most smooth laptop usage you will exer experience.

With its high price and specs this is thoroughly in the performance over budget category of 11 inch laptops and it’s up to you decide whether its flaws are still worth the buy. 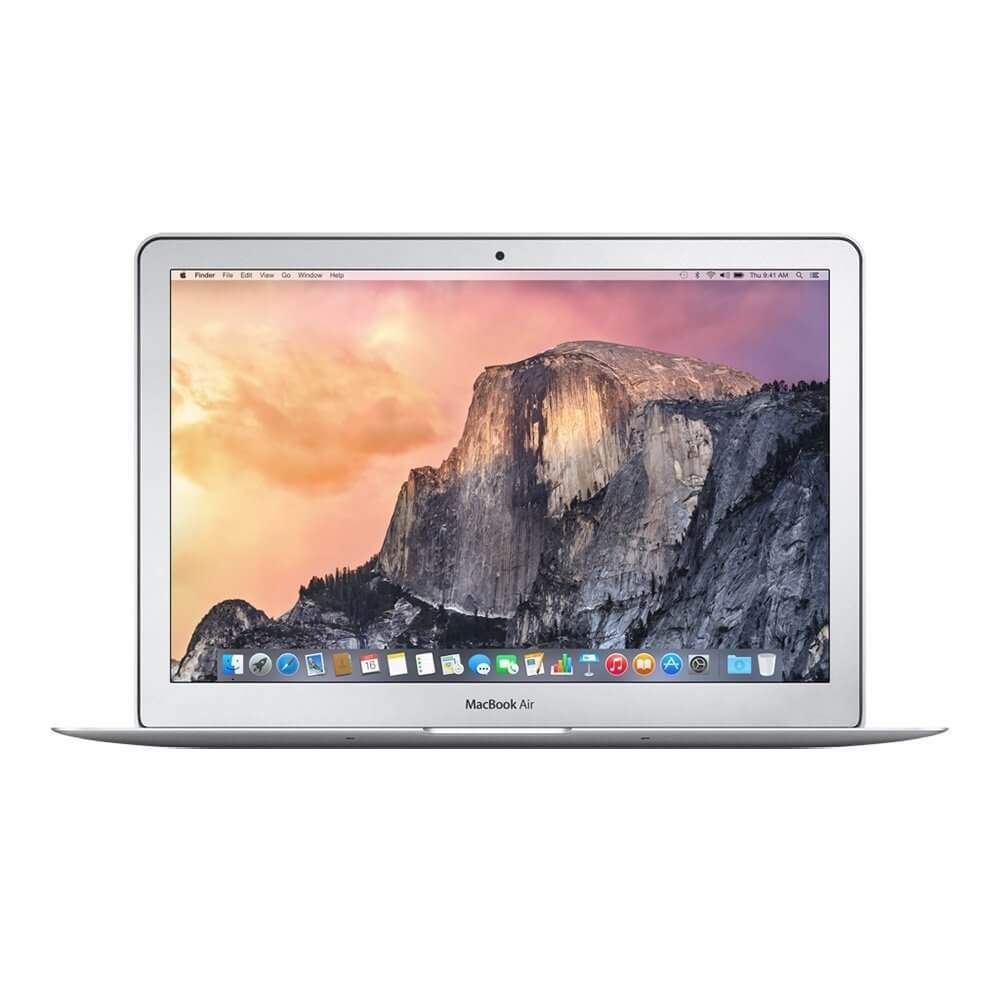 Some people in the PC community absolutely despise OSX and while it can be annoying switching from Windows, there is no debate about its user friendliness and great aesthetics. This laptop really is ultraportable coming in at 0.68 inches at its thickest and a very light 2.38 pounds.The keyboard is adequate but the trackpad is what really shines. Instead of being made out of plastic like a lot of trackpads, Apple makes theirs out of glass which leads to a buttery smooth feeling. With a 128 GB SSD and 4GB of RAM (upgradeable to 8GB if ordered directly from Apple’s website) you should be having no problems with start up speed and sluggishness when browsing the web. Also nice is a 1.6 GHZ i5 Intel CPU and Intel HD 6000 GPU. You won’t be playing the newest triple AAA games on ultra but you should be able to run a surprising number of games with these. Battery life comes in at over 11 hours so you’ll most likely have plenty for the days activities. One knock on the laptop though is the screen. It’s crisp enough but at a 1366×768 resolution it can feel a bit cramped with not enough screen space.

An ultralight weight design with the user friendliness of OSX definitely make this one of the better 11.6 inch laptops on the market right now.