2-in-1 laptops are starting to become a thing, and with good reason. Combining commonly used items (tablets and laptops) into one purchase is a thing many people like because of ease of use, cutting down on how many things they have to buy and just general convenience. This is where 2-in-1 laptops come in. With the portability of a tablet and the functionality of a laptop 2-in-1s have made big strides since when they first came onto the market. Starting off as nothing more than glorified tablets with keyboards and cut down application functionality, 2-in-1 laptops now have some of the best features of both worlds. Of course you do lose some of the performance of a more powerful proper laptop but there’s no doubt that 2-in-1 laptops are ultra portable and convenient. If you’re debating on whether to buy a traditional laptop or a 2-in-1 than read ahead to see if any of the best ones on the market appeal to you. 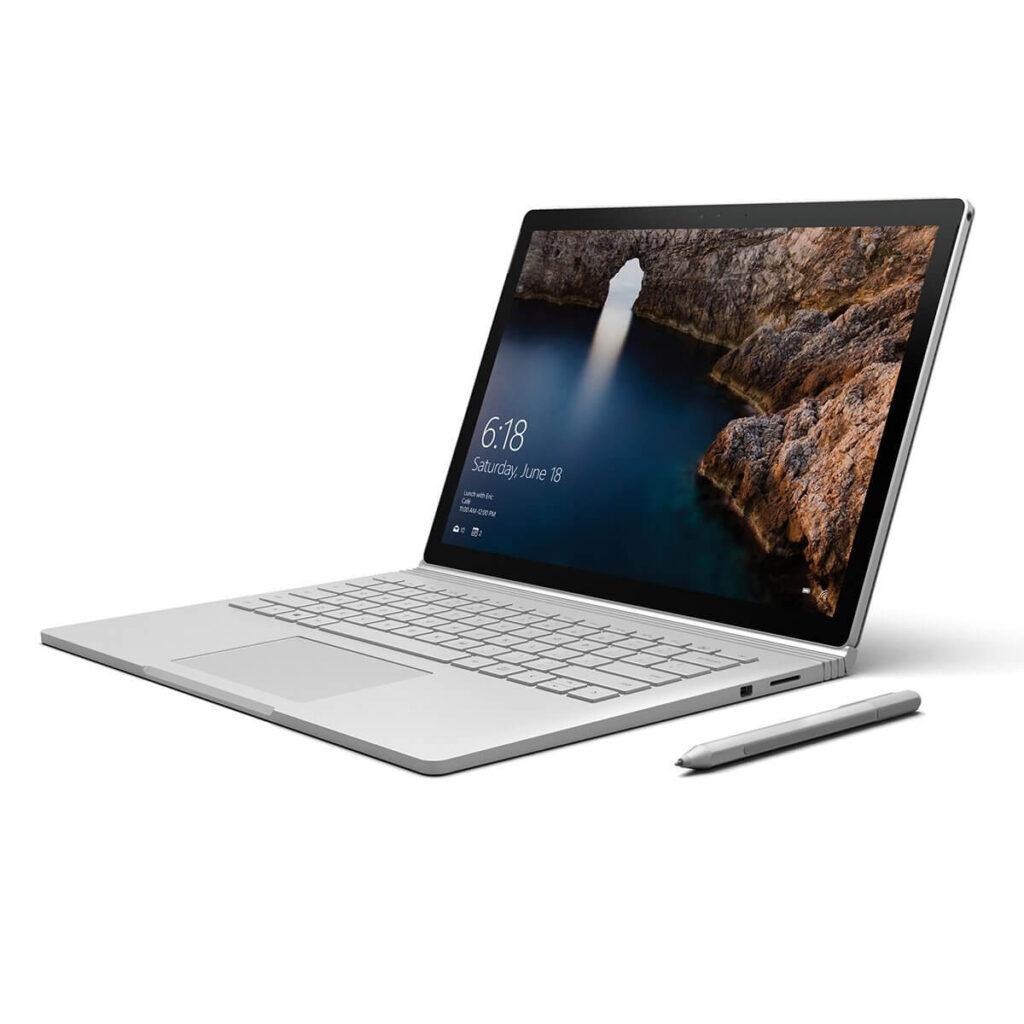 The Microsoft Surface line is probably the most well known of all 2-in-1 laptops and for good reason. With their sleek design, portability, and ability to run a full version of Windows with support for apps like Microsoft Word and Excel this isn’t just a stripped down series of laptops. With a flexible hinge mechanism the Surface Book easily folds back or you can also snap off the tablet portion, leaving the keyboard behind. A 3000 x 2000 screen lets you see crystal clear movies and videos right out of the box. Along with this is the inclusion of a Surface Pen, a nice little addition that makes it easy for any artist or document designer to quickly draw up whatever they’re thinking. As far as battery goes Microsoft has put a fairly unique system in place. Most of the actual battery portion is in the base of the Surface Book and when you detach it it from the keyboard, the tablet portion will last a significantly less amount of time. This isn’t as bothersome as it may seem though because the laptop will try and use the base battery first before using up the tablets supply and will also recharge in a tablet first, base second order. Battery life is about 12 hours for the combined unit and 3 hours for the tablet alone so you should be fine on any trips or long work sessions. 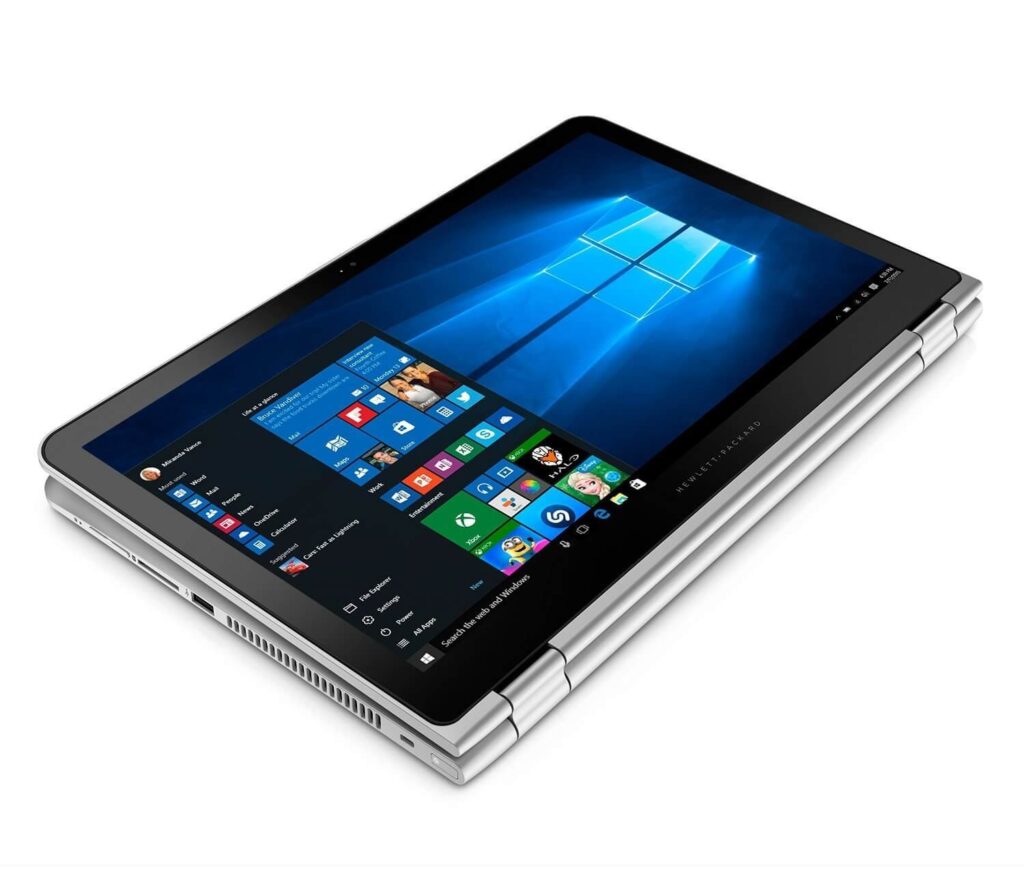 Featuring two editions that come with different screens, the HP Spectre x360 is a polished 2-in-1 laptop with barely any negatives. A great feeling keyboard that still manages to keep a low profile, combined with a smooth trackpad that adds up to a great user experience when browsing the web. The keyboard is also backlit for those late night typing sessions. The laptop easily folds back to become a tablet if you want to use touch as your primary method of navigation and with its lightweight it feels easy to use in one hand unlike some other hybrids. As for the screens I mentioned in the beginning, the HP Spectre x360 13 comes in a 1920 x1080 and a 4K UHD version, both with a 13.3 inch screen. The 1920×1080 is vibrant and does the job well but should you choose to splurge a little (around 250 dollars to be exact) you can get a super well made 4K UHD screen. Colors pop a little more and videos look even better but general performance will take a slight hit due to having more pixels on screen. In exchange for the stunning visuals, the battery life goes down by a pretty big margin; going from around 10 hours on the 1920×1080 version compared to 6-ish hours on the 4K UHD version. Regardless of the version you chose to get, cramming all that technology in such a small space has a drawback. The Spectre tends to get a little hot after extended use but this honestly isn’t that big a deal and is to be expected.

Everything considered the HP Spectre x360 2-in-1 laptop is a great choice, especially if you want a device to consume a lot of videos or movies. 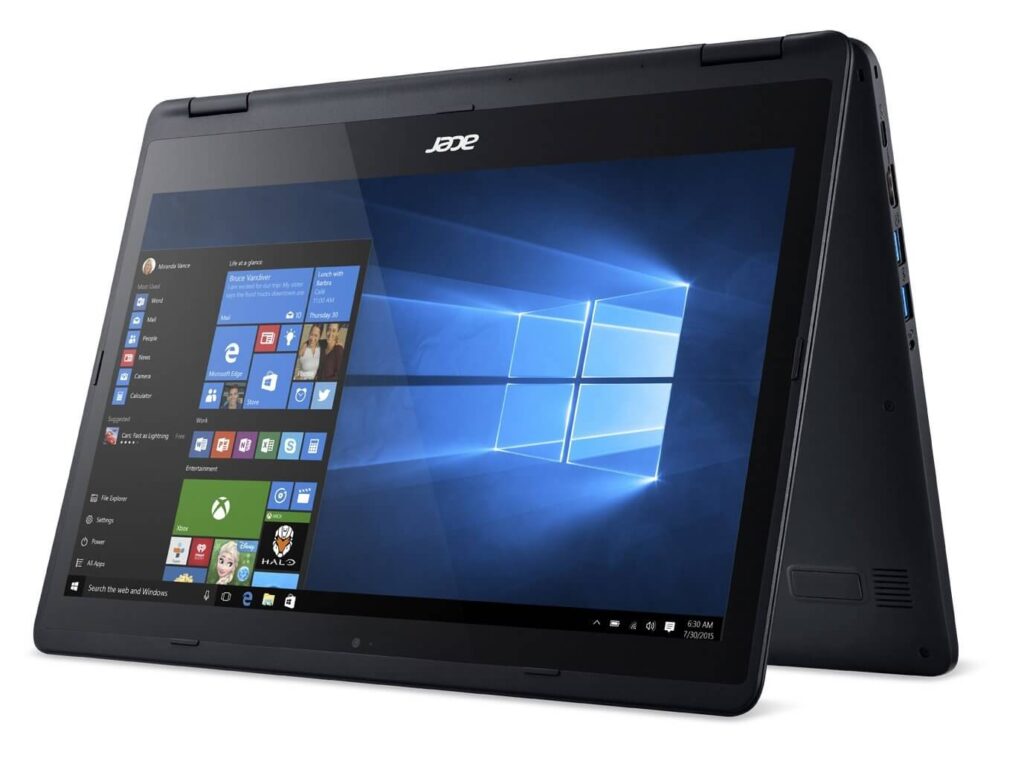 2-in-1 laptops tend to be more expensive than their single product counterparts. That’s where the Acer Aspire R 14 comes in. With a 587 dollar price tag as of this article, you can get the versatility of a 2-in-1 laptop, with few sacrifices necessary to reach that price tag. First, let’s start with the good news. Featuring a strong hinge, a 14 inch 1920×1010 screen and a good trackpad for doing Windows gestures, the build quality is great for a product this cheap in this category. Touch screen controls are also responsive and have the perfect amount of sensitivity for browsing or getting tasks done.The battery power averages out at about 8 and a half hours which isn’t going to last all day but should be enough for the work day or a road trip. One caveat about the overall quality is the keyboard. The keys in general are cramped and take a little too much force to activate keystrokes, which can lead to hand pain when typing for long periods. Another problem is the installation of some bloatware that I would recommend uninstalling. Netflix comes pre-installed which you were probably going to install anyway, but an unneeded games store, audio editor and password manager just clog up hard drive space.

If you’re willing to sacrifice a bit on screen resolution, processor speed and RAM you can also get a more entry-level version of the Acer Inspire R 14 that is only 430 dollars. Either way this 2-in-1 laptop is a great starter for anyone looking to dip their toes into the 2-in-1 world without dropping a ton of dough. 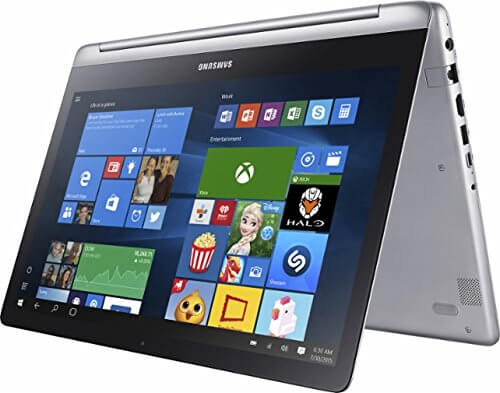 So far we’ve covered 2-in-1 laptops that are focused on work, leisure or a mix of the two. If you’re looking to get some portable gaming in while you’re out and about but a traditional laptop doesn’t appeal to you, then the Samsung Notebook 7 might be the 2-in-1 for you. You’re not going to be blasting through AAA powerhouses like The Witcher 3 in 1080 60FPS but with a core i7 Intel Processor, 12GB RAM and a NVIDIA 940MX graphics card this is definitely the most gamer friendly 2-in-1 laptop on this list. These specs also make it fairly easy to multitask, whether it be multiple tabs open or some light photo editing With a 15.6 1920×1080 screen the games you can run should look fairly good for the most part. You also get responsive touch controls when in tablet mode and a good-sized trackpad that makes navigation a breeze when in laptop mode. As for the downsides, it seems to be a running trend that 2-in-1 laptops have bad keyboards. Not really surprising considering the slim profile of these devices but something to keep in mind yet again for this product. Also of disappointing note is the battery. Lasting at a paltry 5 hours and 53 minutes you won’t be able to get in any marathon gaming sessions unless you can find a plug to charge at.

Still if these minor downsides don’t dissuade you and you’re looking to get in some more hardcore gaming than playing match 3 games on your phone, the Samsung Notebook 7 2-in-1 laptop might be the one for you. 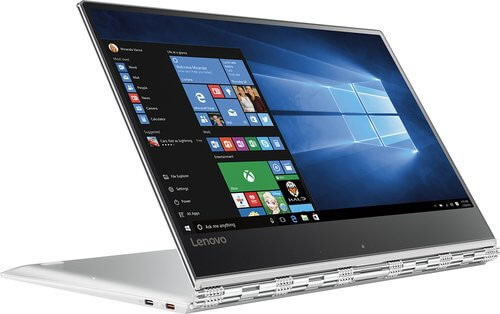 If you want a super premium 2-in-1 laptop, look no further than the Lenovo Yoga 910. Everything from the screen to battery life is at or near the peak of the 2-in-1 game with this device. The screen is slightly bigger than it’s 13.3 inch competitors, coming in at 13.9 inches. Bright and colorful with a standard 1920×1080 resolution, the only problem with the screen is a strange gap between the bottom and the base. The keyboard feels more like a typical laptop computer that is actually pretty surprising and the touch pad is big enough to where you should have no problems doing touch gestures and web browsing. As for the specs you get an excellent i7 7500u, 8 GB of RAM and a 256 SSD. With these you should have lightning fast boot ups and the ability to have plenty of tabs of your choosing open. Even with all this excellence under the hood the Yoga still has more positives. Battery life is around 10 hours which is honestly shocking given the high performance on display. Honestly there are only a few flaws and honestly they’re minor. Heat tends to be an issue over extended periods of time but that’s common of basically all portables. Another is that the audio is slightly lacking compared to other options on this list such as the HP Spectre x360 13.

The Lenovo Yoga 910 is going to set you back a pretty penny (1,200+) but with it’s high performance, great build quality and minimal flaws it might just be best in class when it comes to 2-in-1 laptops.