With PC gaming getting a bigger following every day, more and more people are looking for setups that are budget friendly but don’t sacrifice on quality. Cheap doesn’t necessarily have to mean bad, so with this guide we have rounded up the top five budget motherboards under 100 dollars – that will make a great foundation for your next budget gaming PC build. 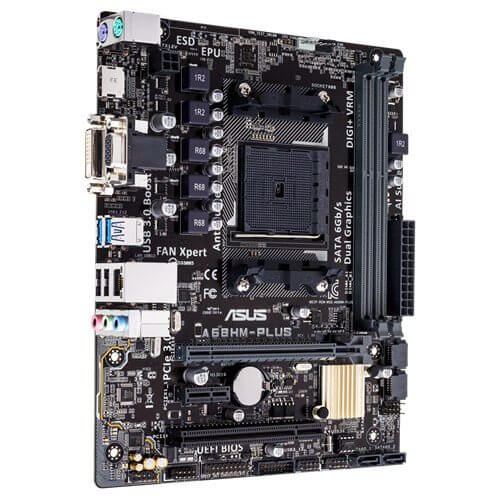 A microATX FM2+ socket motherboard, the Asus A68HM-Plus is a good buy but is limited by some key things. With an FM2+ socket this board is limited to AMD processors which are usually cheaper but less powerful than their Intel counterparts. With only two ram slots you have the potential for up to 32GB of ram but in reality you’ll be capped out at 16GB of ram as 2x 16GB ram sticks are well outside the price range of a budget build. The other big annoyance is that with a single PCI-E x16 slot and a single PCI-E x1 slot right below it, you run into the bottom slot being blocked when a bigger graphics card is taking up the top slot. This isn’t that big a deal however as PCI-E x1 slots are mainly used for things like sound cards or wireless adapters and this problem can be remedied with things you probably already have in your house.

The only real knock on this motherboard though is the lack of future upgrade potential. However the Asus A68HM-Plus is a great buy for any beginner and as the cheapest motherboard on this list you can find decent builds for around 300 dollars that use this as the base. 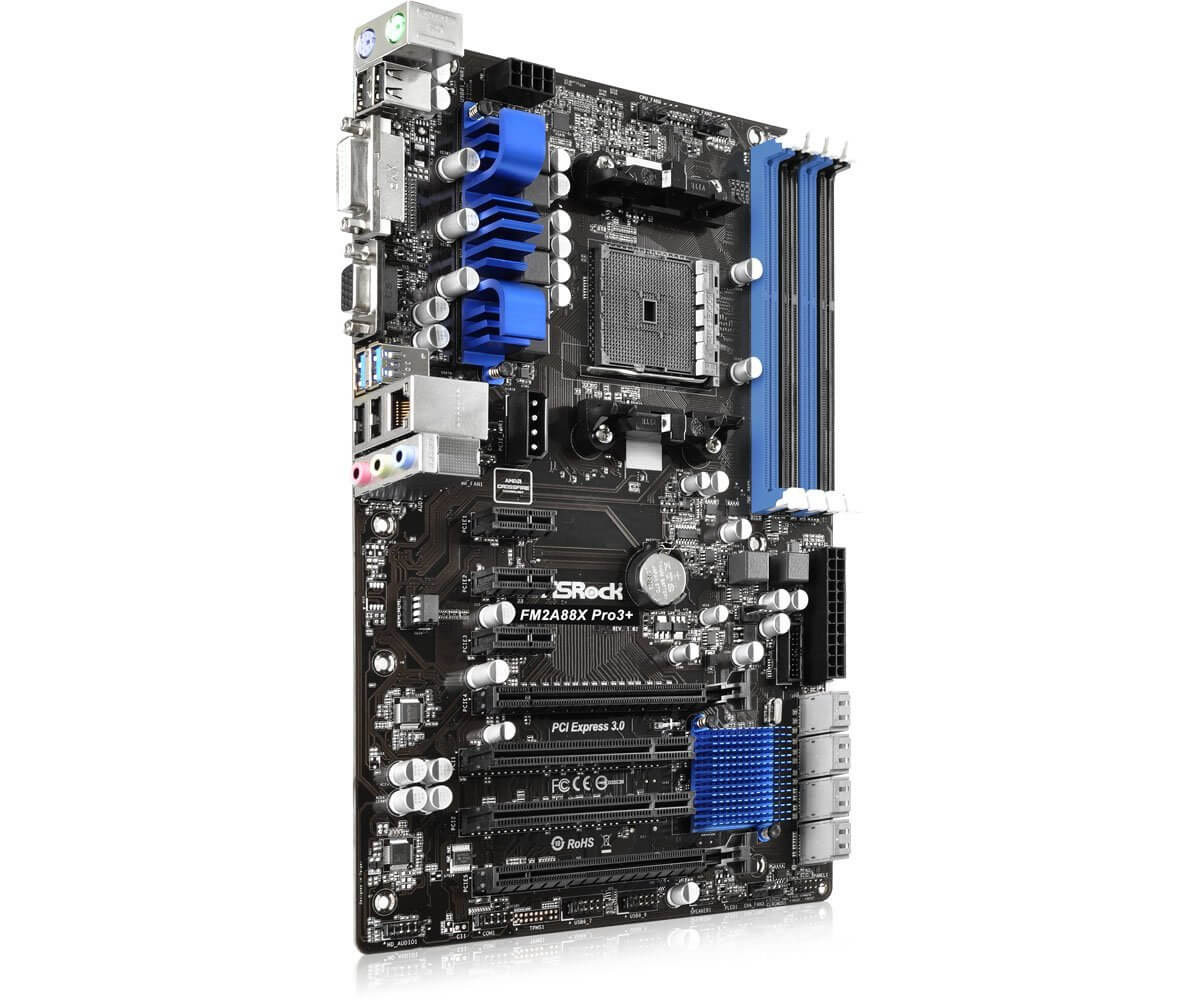 Basically an upgraded version of the A68HM-Plus, this is a full sized FM2+ socket board which is better in basically every way. Starting off we have more RAM slots with 4 slots able to seat up to 32GB of RAM. With two PCI-E x16 slots this motherboard is capable of doing AMD Crossfire if you happen to have two AMD GPUs lying around, although that is probably unlikely and I wouldn’t recommended it as one of the PCI-E slots is x4 speed so you won’t be getting the best experience. Also coming with this motherboard is a wealth of various connectors and ports. Eight SATA 3 connectors ensures you can have multiple hard drives or SSDs of your choosing. On the back of the motherboard are six USB ports so you can have your mouse, keyboard, headset, phone charger or whatever other accessories you desire plugged in. One annoyance about this motherboard is the lack of an HDMI port which isn’t that big a deal, but slightly inconveniencing given the prevalence of HDMI in TVs and monitors these days.

Overall the Asrock FM2A88X Pro3+ makes a great motherboard for any user from newbie to experienced as there isn’t a lot wrong with it and it has room for upgrades. 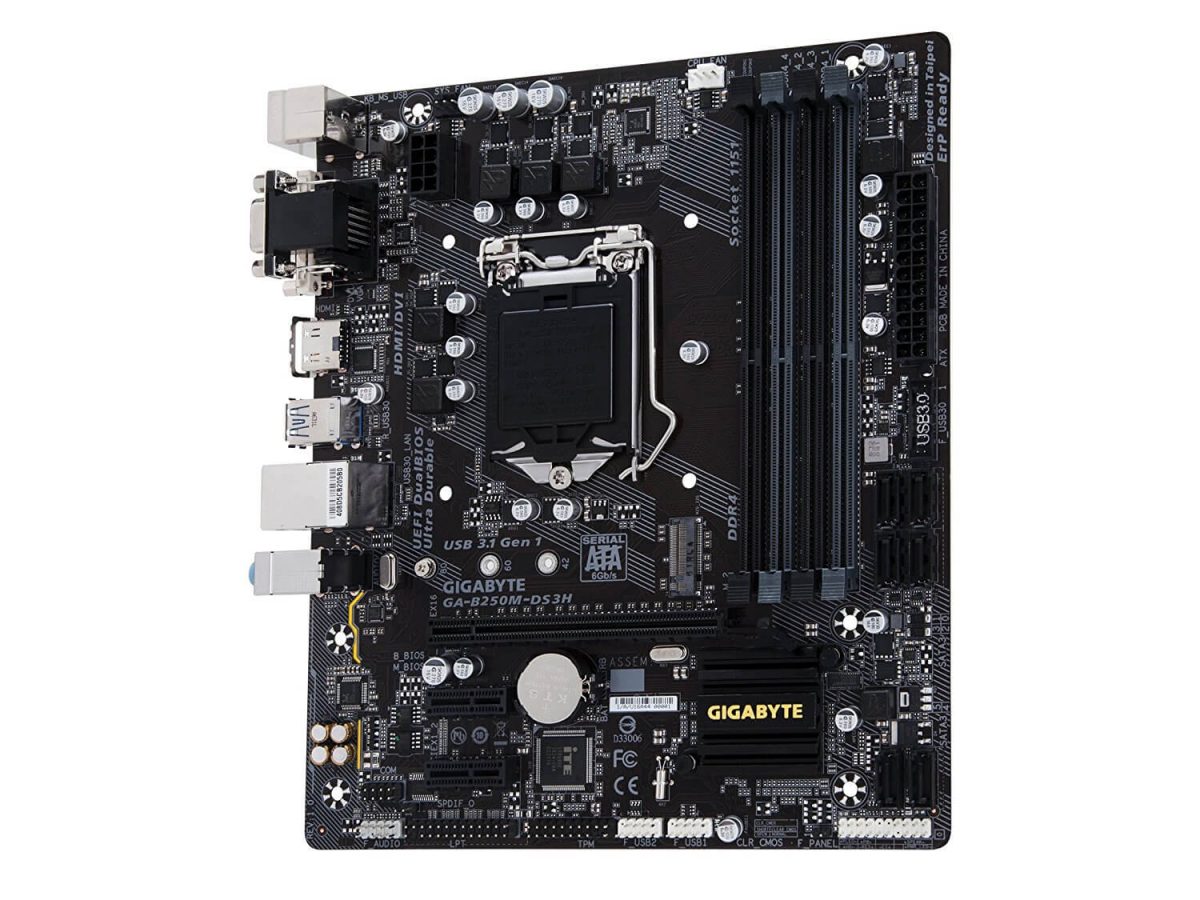 With support for the newest Intel processors this motherboard is a great choice for everyone looking to build a computer. As a microATX board it is smaller than it’s similar B250M-D3H counterpart, but this motherboard still has plenty of features packed into it. Capable of holding the newest graphics cards with it’s PCI-E x16 slot and up to 64 GB of DDR4 RAM this motherboard has plenty of upgrade potential. Along with this are plenty of ports and connectors, with 4x USB 3.1, 4x USB 2.0 , 6x SATA3, and 1x M.2 connectors for a wide variety of hard drives and accessories you choose. Especially nice is the M.2 connector which allows you to get the fullest out of any SSDs you want to use.  Also as an added benefit is Gigabyte UEFI Dual BIOS which a is a more user friendly version of the traditional black and white BIOS, and will allow you to tweak certain aspects of your PC easier.

All these futures add up to make the B250M-DS3H a great purchase for basically anyone. This motherboard is a great buy not only for the present, but especially for the future as it is easily upgradeable. Really the only thing I would consider “bad” about this product is as a microATX board it might get a little cramped in there depending on your cable management, choice of fans and graphics card. 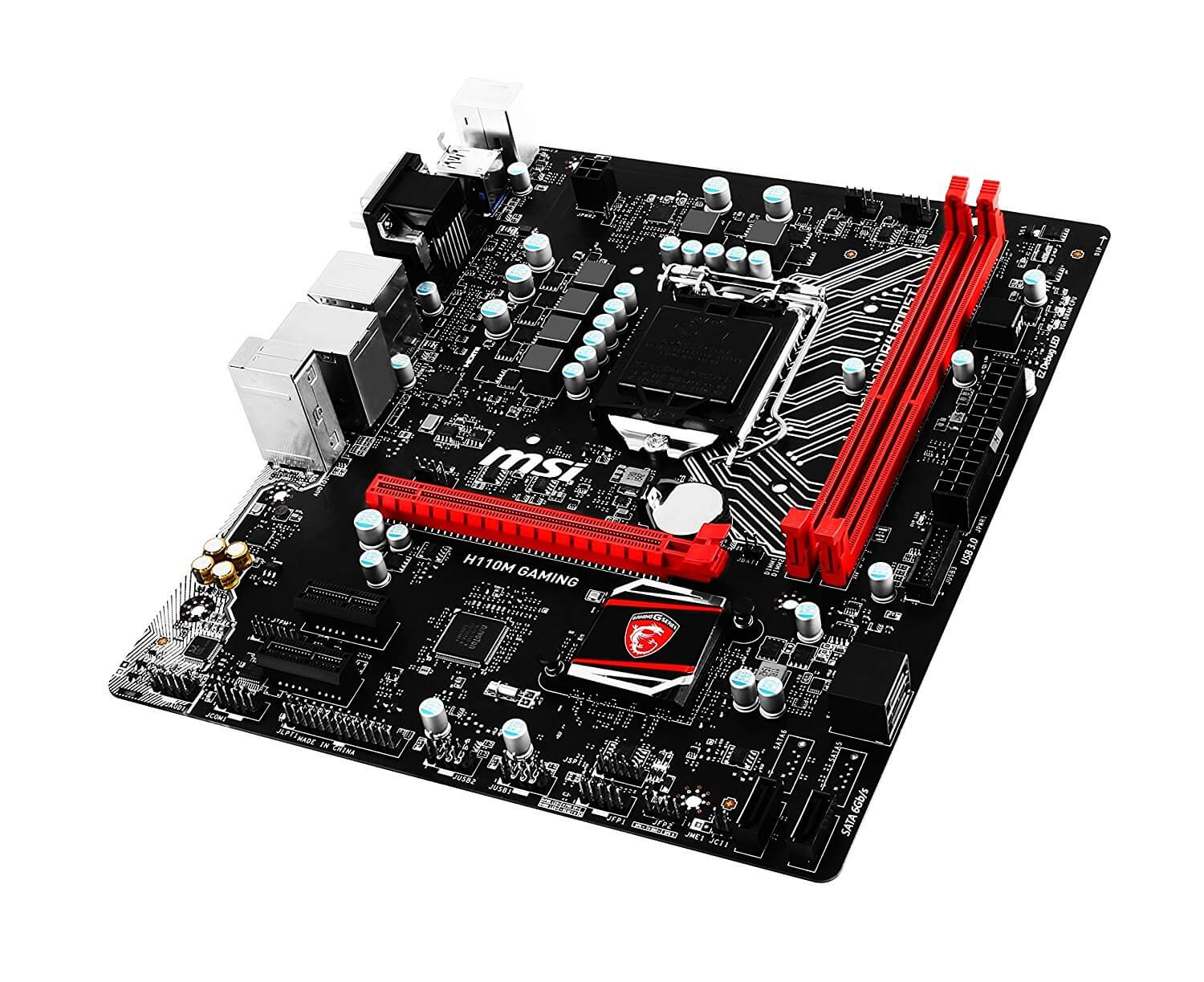 The MSI H110M Gaming motherboard is another microATX board that supports 6th gen Intel CPUs so again it comes with some of the space problems that you might not face with a full size motherboard.   With that said, everything else about this product is great and you can’t go wrong with this board. 4x USB 3.0, 2x USB 2.0, and 4x SATA 3 ports should be enough however it’s a bit disappointing there isn’t more. Also included is 1x PCI-E 3.0 x16 slot for your GPU and 2x PCI-E x1 and 2 DDR4 RAM slots with a max capacity for 32GB.

As far as negatives go there really isn’t a lot of them with this motherboard. If the lack of ports and connectors doesn’t bother you too much, it’s practically just a cheaper version of the next motherboard on this list. 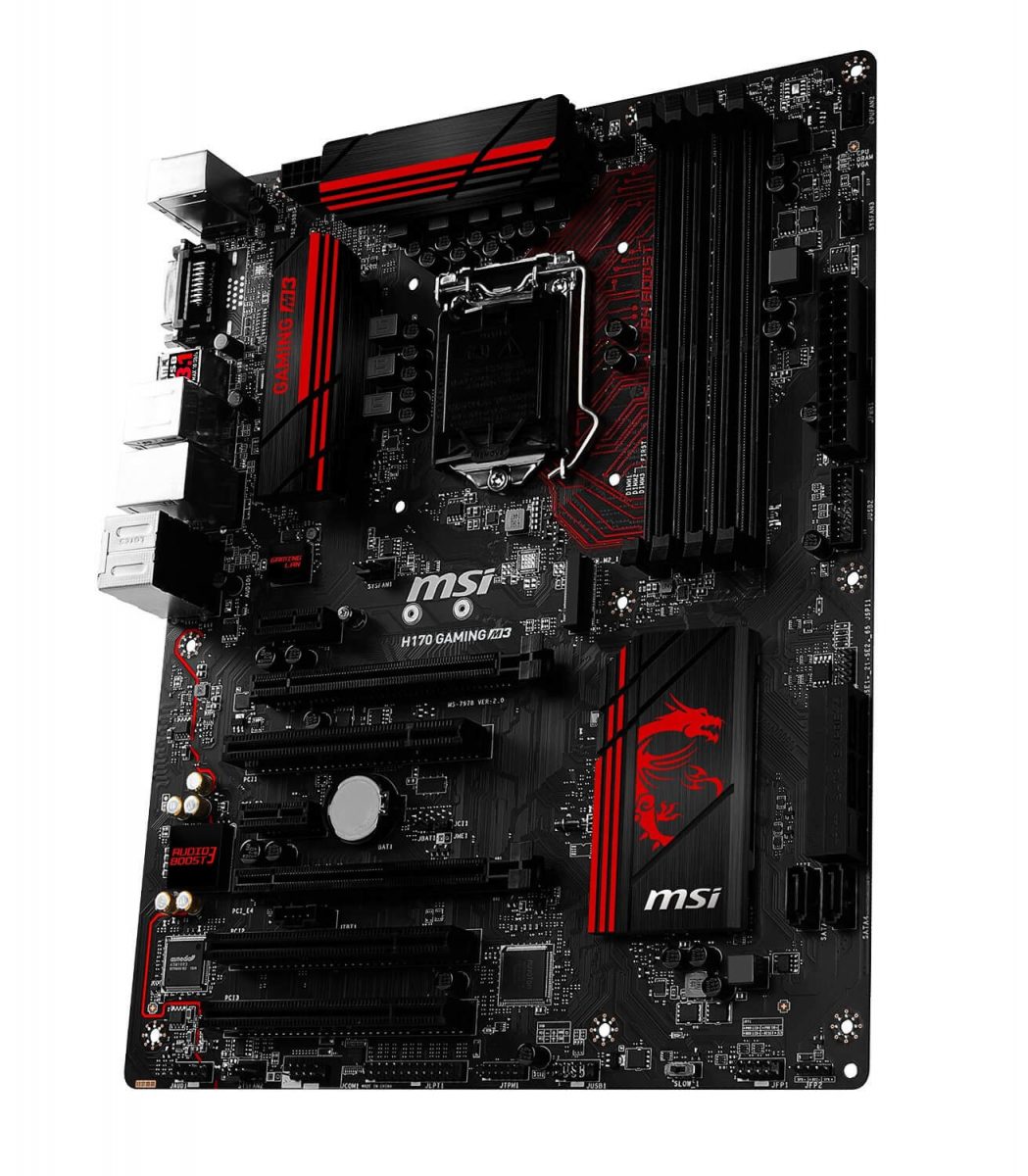 With it’s sleek design, red on black color scheme and plenty of features it might be easy to confuse this with more expensive higher end motherboards. While it is pushing the limit for what qualifies for this list, the MSI H170 GAMING M3 is well worth every penny. 2x USB 3.1 on the front with 4 more on the back and 2x USB 2.0 ports make it so you can plug a veritable army of accessories and are spaced so you most likely won’t have problems with them colliding. Also included are 2x DDR4 RAM slots with a max capacity of 32GB, 1x PCI-E 3.0 x16, 2x PCI-E 2.0 x1, 4x SATA 3 slots and M.2 connector. As a full size board you should have no problem fitting whatever necessary equipment you want inside. Also included is MSI’s easy to use BIOS system which should make getting the maximum performance of your PC a cinch.

Seeing as the motherboard is the foundation of your computer it’s important to pick the one that supports the CPUs you want to use and has the right tools for whatever job you want. All in all though, motherboards make little difference in the actual gaming performance of your PC given that you didn’t buy junk for your other parts.