Despite the fact that it is no longer the king of the castle in the mainstream segment, having lost its crown to the i7-7700K, Intel’s i7-6700K is still a very powerful processor, capable of delivering some tremendous performance horsepower. Its successor, the 7700K, comes with a performance boost and the new Z270 chipset to go with it – two reasons to consider it for a new build; however, if you’d rather go with matured technology and save yourself the headache of dealing with unpolished features (new chipsets aren’t exactly renowned for bug-free and smooth operation right from their first release), the i7-6700K is your go-to processor, especially if you also consider that its priced dropped a bit with the release of the 7700K.

Having a potent processor doesn’t mean much if you don’t have an adequate motherboard to pair it with, though, and given the plethora of options available out there, picking the right one can be a hit-or-miss. Here are some of the best motherboards for the i7-6700K, handpicked to fit every usage scenario and budget. If you want to learn more about the i7-6700K, click here. 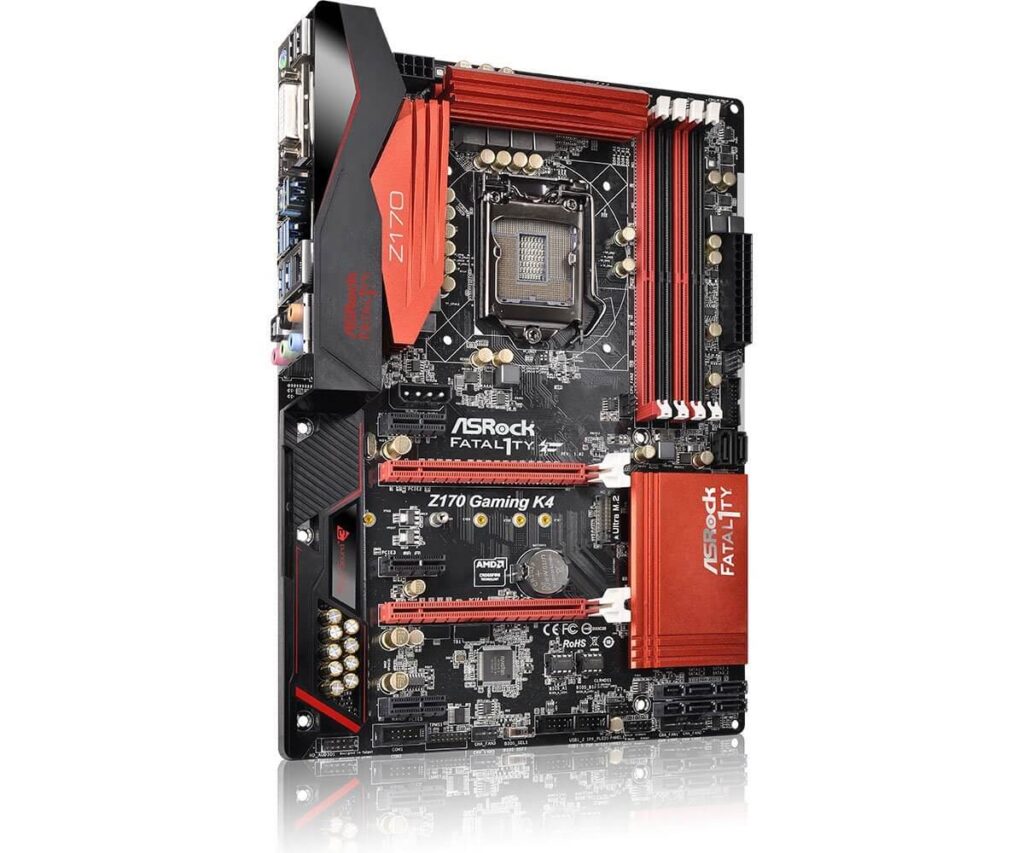 Asrock is renowned for its highly-competitive products and its aggressive pricing strategies – two checkboxes ticked by the Asrock Fatal1ty Z170 Gaming K4 motherboard. While the Fatal1ty K4 is far from being a top-of-the-line product, it does offer all the core features you need to unlock the i7-6700K’s potential without breaking the bank.

As its name suggests, the Asrock Fatal1ty Z170 Gaming K4 is based on the Z170 chipset, which means the board is overclocking-friendly, and thanks to the 10 power-phase design, combined with Asrock’s 12k Platinum Capacitors and the generous heatsinks that spread across the mosfets and chipset to provide proper cooling, its overclocking performance is quite impressive, to say the least: reviewers have been able to push the 6700K all the way up to 4.6 GHz, which is not bad at all for a motherboard you can buy for less than $150.

Feature-wise, the Fatal1ty K4 has all the basics: gigabit LAN (based on the Killer E2400 controller), 6 SATA III ports, 2 SATA Express ports, as well as an M.2 slot (PCIe x4). On the I/O side, the Z170 Gaming K4 is decent but not breath-taking, packing 8 USB 3.0 ports (one of them being a type C port), DVI-D and HDMI outputs, as well as 7.1 channel audio with optical output.

Aesthetics is another one of Asrock’s general strongpoints, and the Fatal1ty Z170 is no exception. The board comes with a black PCB with red accents on the PCI-Express slots, two of its four DIMM slots, and its heatsinks. The contrast is completed by the gold accents on the capacitors across the board, giving it an imposing look, well above its competitors from the same price range. 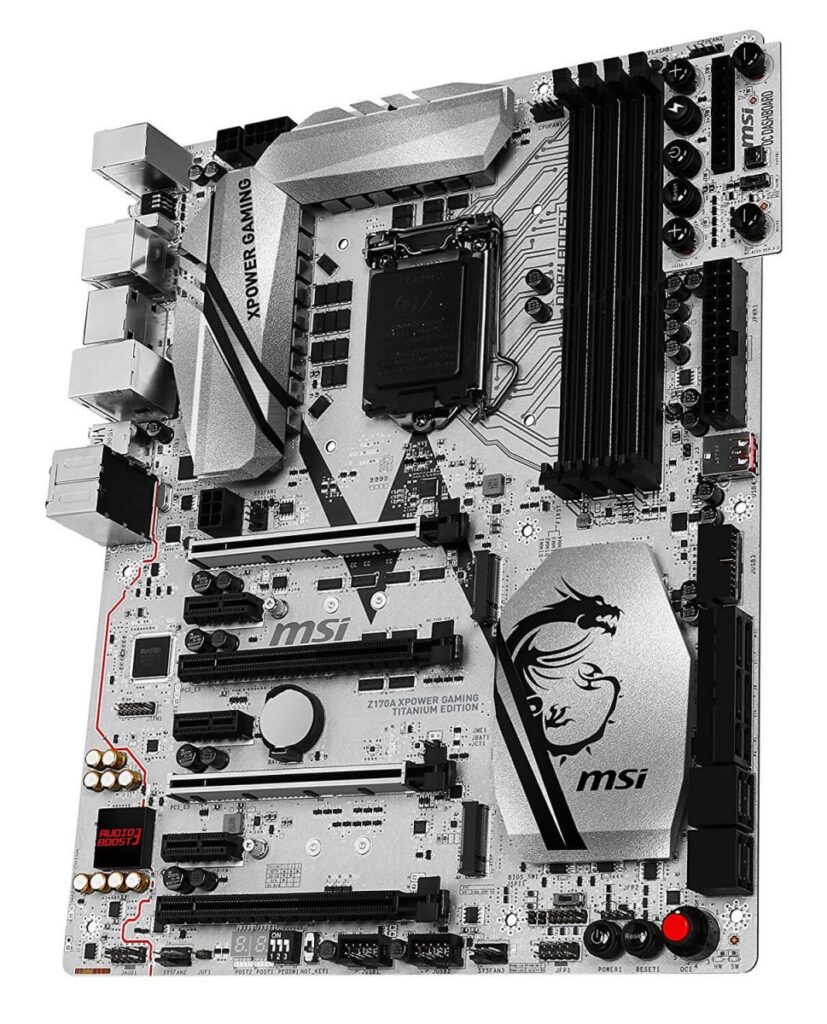 If money is not an issue and you want a motherboard that will squeeze even the last megahertz from your 6700K, and also look amazing while doing it, look no further than the MSI Z170A XPOWER Gaming Titanium Edition. Before you even get to be blown away by what this beast of a motherboard offers in terms of features and performance (spoiler alert: it offers a lot), the board makes a strong first impression due to its out-of-the-ordinary aesthetics – the board comes with a titanium-silver PCB.

It was only logical for MSI to make their top Z170 board stand out of the crowd, but what they managed to achieve probably exceeded their own expectations: the overall thematic of the board, which combines the silver of the PCB with the black and white accents on the slots and heatsinks, is disrupted by a splash of color which is the red knob located on the bottom right of the board. What does the knob do, you ask? It gives you one-touch access to overclocking, allowing you to ramp up the processor’s frequency with the turn of a knob, literally. Pushing things even further in the overclocking department is the OC Dashboard, which is a separate custom PCB that provides hardware access to the main overclocking features. The complex yet user-friendly BIOS along with the MSI Command Center app provide the software support to complete the overclocking process. Tests carried out with this board have seen the i7-6700K hit the 5 GHz milestone without much trouble.

Aimed at those that want nothing but the best and are prepared to pay the price for it, the Z170A XPOWER Titanium Edition is an absolute beast, and pretty much the best motherboard for the i7-6700K money can buy. 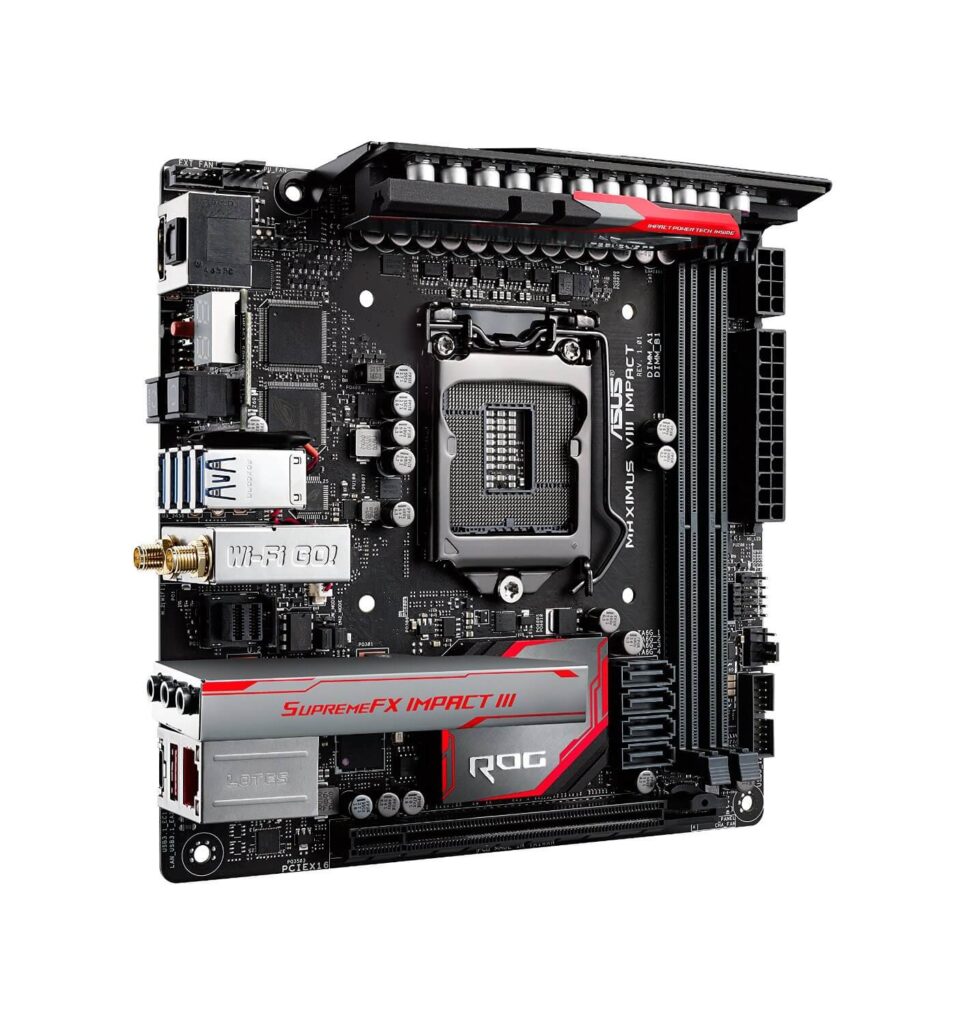 History has proven numerous times that bigger is better; with the Maximus VIII Impact, ASUS begs to differ. Using a clever semi-modular design, ASUS managed to cram in all the highlight features of a full-size motherboard on a mini-ITX motherboard, and thus the ASUS Maximus VIII Impact was born.

The ASUS Maximus VIII Impact is aimed at users that need to cram as much performance as possible into a small packaging, whether it’s for a high-end HTPC or an easily-movable workstation. Think of it as a proof of concept that demonstrates that size does not always matter.

Due to the length and width limitations of the board, which needed to stay in line with the mini-ITX form factor requirements, ASUS’ only option for expansion was height; therefor, some of the main components of the Maximus VIII Impact come with their own dedicated vertical PCBs that plug into the motherboard. The most notable module is the VRM one, situated above the CPU socket; instead of cramming some mediocre components on the little space available on the board itself, ASUS opted to move the entire VRM stage to a different board, and thus managed to go with an 8-phase CPU VRM and 2-phase RAM VRM, paired with PowIRStage MOSFETs and 10K capacitors. This translates into some serious overclocking capabilities, the board being able to push a 6700K all the way up to the 5GHz ballpark, which is something you don’t usually get in a mini-ITX board. Also benefiting of its own PCB is the audio segment, which consists of a Supreme FX Impact III board that hosts a Supreme FX audio processor, an ESS ES9023P DAC and a dedicated headphone amp.

On the connectivity side, the Maximus VIII is set to impress once more. The networking side consists of an Intel l219V gigabit controller paired with a Wi-Fi 802.11 a/b/g/n/ac dual-band module, providing exceptional performance whether you opt to go wired or wireless. On the storage side it packs 4 SATA III ports and a U.2 port, with an M.2 port being absent most likely due to physical space limitations. USBs come in all shapes and sizes, the board featuring USB 3.0, USB 3.1 Type-A and USB 3.1 Type-C connectors.

Overall, if you’re looking for a mini-ITX board that packs in a wide selection of connectivity options and delivers solid performance, you can’t go wrong with the ASUS Maximus VIII Impact. 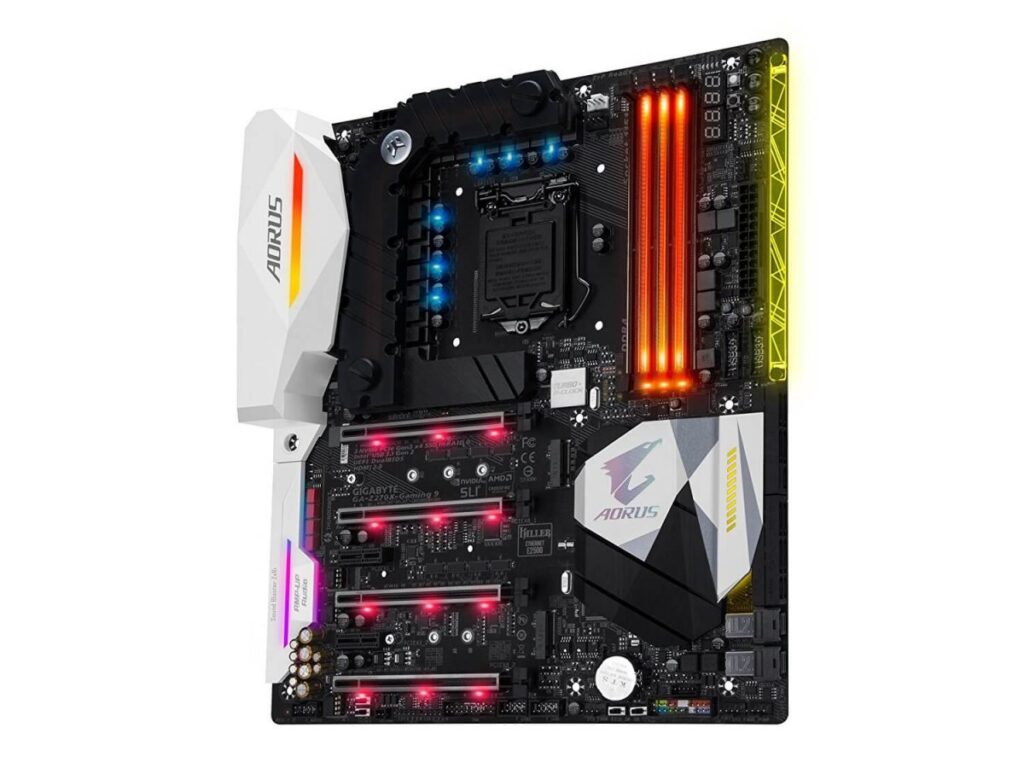 Just because the Z270 chipset is still in its incipient stages doesn’t mean you should ignore it completely. Sure, some aspects might still need some ironing out, but after all, the Z270 is basically a Z170 on steroids, so you might as well give it a shot, especially if you plan to upgrade your i7-6700K to a Kaby Lake processor in the future. So, without further ado, here’s the Gigabyte GA-Z270X Gaming 9, one of the best implementations of the Z270 chipset.

While the Z270 chipset is quite impressive in itself in terms of specs, it is not the element that makes the Gigabyte Gaming 9 the breath-taking board it is. It’s its side features that make it stand out of the crowd. For starters, the Gigabyte GA-Z270X Gaming 9 puts a great emphasis on aesthetics, featuring one of the most complex and comprehensive RGB lighting systems out there, consisting of six RGB light zones, customizable to any color in the RGB spectrum, combined with numerous lights effects. As if that was not enough, the board also comes with programmable headers for LED strips, allowing you to push the light show to the ultimate level.

Gigabyte worked with EK Water Blocks, one of the most resonant names in the field of water cooling, to create a hybrid solution that provides the best possible cooling for the VRM area whether you opt for air cooling or liquid cooling. Cool VRMs are happy VRMs, and happy VRMs provide the best overclocking potential.

One more highlight of the Gigabyte Gaming 9 is its audio side: driven by a Creative Sound Blaster ZxRi chip, the on-board sound card boasts Hi-Fi grade components, upgradable OP-AMPs and a 120+ dB certification by Creative – a combination that not many sound cards can brag with.

Connectivity-wise, the Gaming 9 has it all, and that’s not an overstatement at all. The board packs in 4 DIMM slots supporting memory modules running at up to 4133 MHz, 4 PCI-Express x16 slots, 2 M.2 slots, 2 U.2 slots, 2 gigabit LAN ports, every variation of USB 3 you can think about (Thunderbolt support included), Wi-Fi, Bluetooth and pretty much everything else you can think of – the Gaming 9 has it all. 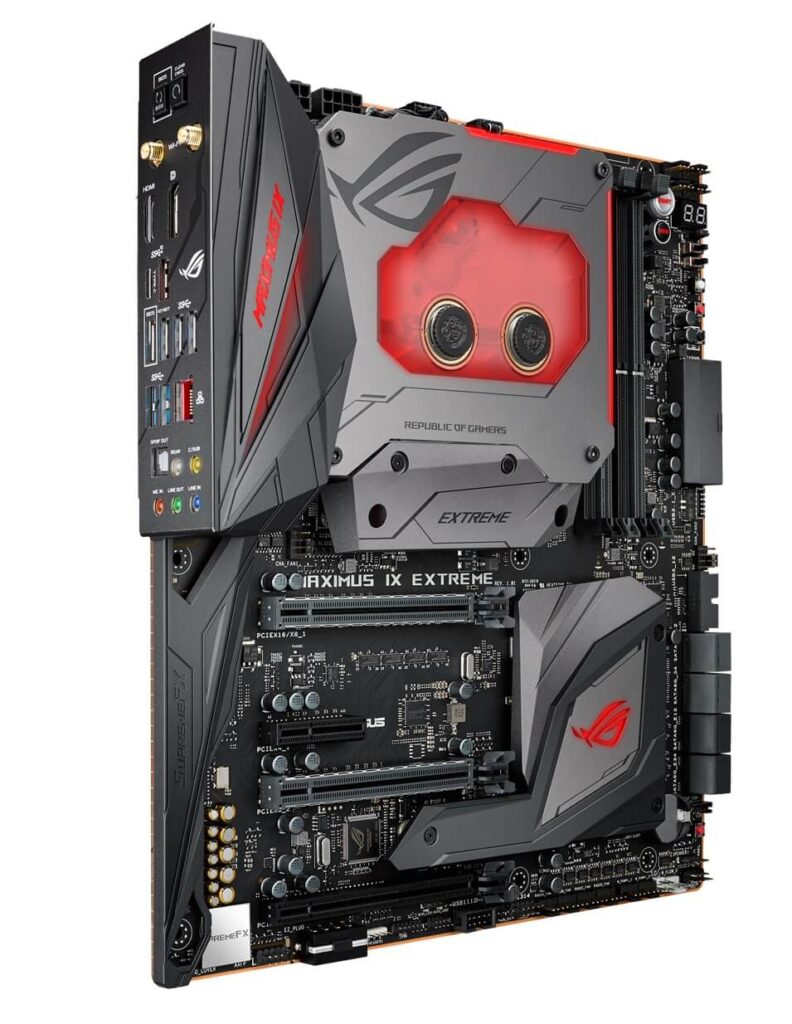 So you want the absolute best motherboard for your i7-6700K, and money is not an issue. You want rock-steady stability, insane performance and jaw-dropping looks. You want bragging rights for having the first-ever motherboard with an included water cooling monoblock. You want the ASUS ROG Maximus IX Extreme.

ASUS is well-known for going the extra mile with its high end boards from the ROG series, but with the Maximus IX Extreme, it went another extra mile on top of the regular extra mile, working with Bitspower to create a custom cooling solution that provides the ultimate cooling for overclocking enthusiasts that want to push their systems to the ultimate limits and beyond.

The ASUS Maximus IX Extreme is all about being cool, and this reflects not only in its iconic monoblock which covers the CPU and VRM areas, but also in the large heatsink on the chipset, which extends over one of the two M.2 slots; the other M.2 slot falls under the main monoblock, so both your M.2 SSDs will run cool and fast. If you opt for traditional SATA drives, you have 8 ports to fill.

All the usual suspects are there in terms of connectivity: an Intel l219-V-based gigabit LAN port that can work in tandem with the integrated 802.11AC Wi-Fi, USB 3.1 Type A and C, numerous USB 3.0 ports, HDMI, Display Port, gold-plated audio connectors – it’s all there.

Performance and good looks go hand-in-hand in ROG components, and the Maximus IX Extreme is no exception, coming with a black PCB with two-tone grey finishes on the ports, heatsinks and water block. Complementing the looks is the ASUS Aura light system that spreads to the monoblock, heatsink and I/O cover, which can be customized in terms of color scheme or effects, and can even sync to other Aura-enabled devices such as video cards, LED strips, mice or keyboards.

Overall, if you’re looking for the best motherboard for your i7-6700K, a motherboard that can push it to extreme, but is also feature-rich, looks good and is future-proof, you found it – the ASUS ROG Maximus IX Extreme.