What are good motherboards for the i7-7700K? Before we get into that, let’s talk about the CPU. Intel’s i7 CPUs have been dominating performance charts from the moment they launched in 2008, and have been the processors of choice for gamers, hardcore multitaskers, and people that needed tremendous amounts of processing power ever since.

They are Intel’s top-of-the-line processors for the general audience, being outperformed only by server-grade CPUs (Xeon) and Intel’s own enthusiast-series (Intel Extreme), both of which are lineups targeted at entirely different user segments. In their own segment, i7 processors had no real competition up until recently when AMD launched Ryzen.

The i7-7700K is Intel’s seventh implementation of i7 and is similar to the Kaby-Lake architecture, which is basically a refresh of the Skylake architecture that pushes the 14nm fabrication process even further. At the time of writing, the i7-7700K is Intel’s most powerful mainstream CPU, and the option of choice for Intel fans building a high-end rig.

Out of the box, the processor has an operating frequency of 4.2GHz, which goes up to 4.5GHz thanks to the Turbo Boost technology. However, being an unlocked CPU, its special feature is its overclocking potential – paired with a good motherboard, the i7-7700K can blow past the 5GHz barrier without much 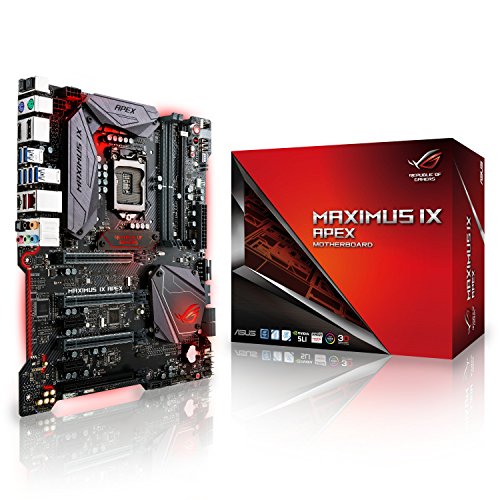 The ASUS Maximus IX Apex is a motherboard aimed at overclocking enthusiasts that want to push their components to the limit. Everything about it is for performance and customizability.

At a first glance, the ASUS Maximus IX Apex may not seem that imposing – it doesn’t have the thermal armor present on the SABERTOOTH models, nor the huge water block of the Maximus IX Extreme, and you might mistake it for just another ASUS motherboard.

The Maximus IX Apex is anything but “just another motherboard”. Look at it for more than a second and you will notice that it’s big: Extended-ATX-big, to be precise. Then it’s its shape: the angled elements inspired by the F-117 Stealth Fighter Jet, paired with the X-shape asymmetrical design of the board give it a really unique feel.

Last but not least, there are some customizable 3D-printer-friendly elements that are integrated with the Aura Lighting feature, allowing you to customize the cutouts and light effects to make the motherboard stand out like no other.

While the Maximus IX Apex may have some competition in terms of design, it absolutely crushes everything in its path in terms of performance. The first clue is given by the CPU power connectors: the board comes with 2 x 8pin connectors, an indicator that the board can drive a CPU to impressive frequencies without being bottlenecked by a lack of power.

The hefty cooling on the VRMs around the CPU socket along with the numerous controls for a fine-adjustment of the overclocking settings should further indicate that the Apex does not mess around, but if you’re still not convinced, a look at the numbers will do the trick for you: the ASUS Maximus IX Apex managed to push an Intel i7-7700K to a mind-blowing 7383MHz at the ASUS ROG Absolute Zero event, setting a still-standing world-record for this CPU in the process. 7383MHz. Let that number sink in.

Another standout feature of the ASUS Apex is the DIMM.2 slot. Simply put, the DIMM.2 module is an add-in card that fits on a specially-designed DDR4 slot and can support two M.2 drives, providing them with blazing speeds and proper cooling.

The connectivity side is rich but not out of the ordinary. Wi-Fi and Bluetooth connectivity are missing, but everything else is there. 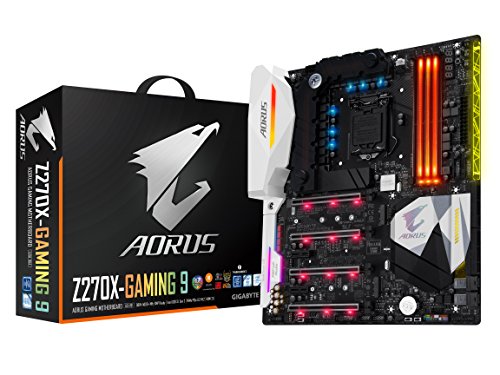 The Gigabyte GA-Z270X-Gaming 9 has the looks, the performance, and the features to satisfy everyone’s needs. Whatever it is you’re looking for in a motherboard, chances are the Gaming 9 has it.

Gigabyte managed to bring a much-needed design refresh to its boards with the introduction of its Aorus line, and the Gigabyte Aorus Gaming 9 is the perfect example. The board looks big both due to its format (Extended-ATX), as well as due to the massive hybrid heatsink that cools the VRM area, large chipset heatsink, and the gigantic shield that stretches all the way along with one of the sides of the card.

Gigabyte opted for a neutral color scheme with a black PCB with some silver and white elements, and a drop of color in the shape of the Aorus logo, which makes the board fit in nicely with any color theme you might have in mind for your build. The board really shows its strength in the aesthetics department once you power it on, though: it has 6 different fully-customizable RGB light zones – enough to put your Christmas tree to shame.

Great looks are not everything the Gigabyte GA-Z270X-Gaming 9 has going for it – the card also features some exciting hardware features. The hybrid cooler on the VRM area provides some serious cooling, whether you go for air cooling or water cooling, meaning the VRMs won’t have any issues if you opt for some serious overclocking, which is quite easy to accomplish due to the diverse overclocking controls present on the motherboard.

It’s not only CPU horsepower that received special attention, though – one of the most notable features of the Gigabyte Gaming 9 is the addition of a  PEX8747 chip that boosts the number of PCI Express lanes to the CPU to 32, allowing for unparalleled performance in SLI or Crossfire configurations (up to 4 cards!).

On the audio side, the Gaming 9 comes with an award-winning ZxRi chip that features a 120+dB certification, along with 2 hardware amplifiers.

The storage department wasn’t neglected either, the card supporting M.2, U.2, and Gen3 x4 NVMe PCIe SSDs, along with the usual SATA drives support.

When we mentioned that the Gigabyte Aorus Gaming 9 has it all, we weren’t kidding. The list is so extensive that we won’t even post it here. You can find the connectivity options, as well as all other specs of the Gigabyte Gaming 9 here. 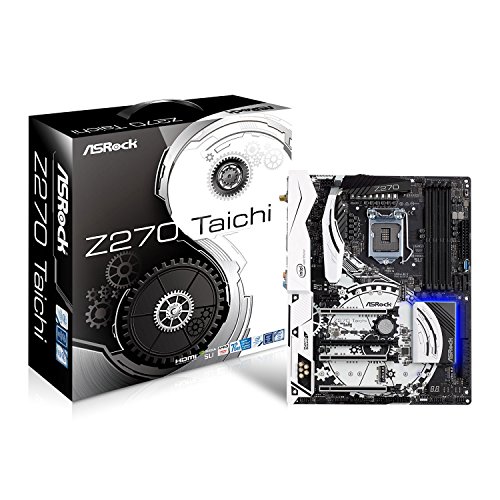 Some people like their rigs to be big and imposing, others want them to be small and discrete. If you fall into the latter, and want a small motherboard that still incorporates a lot of features and power, the ASRock Fatal1ty Z270 Gaming-ITX/ac is it.

Despite its small size, the Fatal1ty Gaming ITX/ac incorporates all the hardware essentials needed for such a build and also looks good in the process. The board features a red-black color theme, with a black PCB and red accents on the RAM slots and chipset/VRM heatsinks. LED lighting is not present, as such motherboards are mainly for small builds where the other components usually obstruct the visibility of the motherboard, so such a feature would have been a fairly useless addition.

Hardware-wise, the ASRock Fatal1ty Gaming-ITX/ac is ready to take on other Z270 motherboards without much effort. Thanks to the use of high-quality components such as the 60A power chokes and the dual-stack MOSFETS, the board has some more-than-decent overclocking potential, having no trouble pushing an Intel i7-7700K past the 5GHz barrier. RAM overclocking is also possible, so with a bit of tinkering and a good kit of RAM, you should be able to push it above 4000MHz.

In terms of storage, the ASRock Fatal1ty Gaming-ITX/ac comes with 6 SATA ports, 1 SATA Express, and one Ultra M.2 slot, which should give you plenty of options – probably more than the case will be able to handle.

Whether you plan to use the ASRock Fatal1ty Gaming-ITX/ac in a gaming build, an HTPC setup, or anything in between, you’ll notice that the board has all the connectivity features you may need for any usage scenario. The board comes with 6 x USB 3.0 ports, 1 x Intel Thunderbolt 3 port (USB-C compatible), 1 x DisplayPort, 1 x HDMI port, 7.1 channels audio + optical output and 2 Wi-Fi antenna ports. Impressed? You should be. 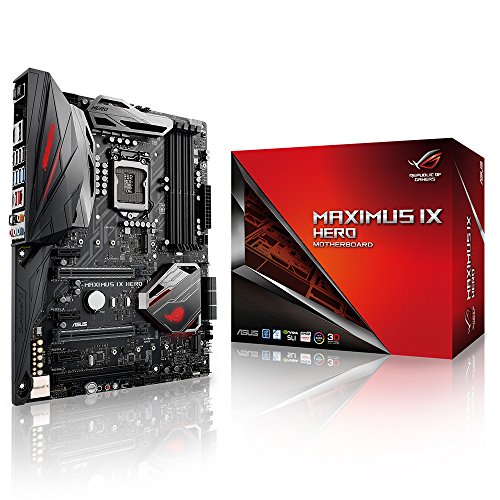 The ASUS Maximus IX Hero is a card for those that want great all-around performance. It has the looks, ASUS’ renowned quality, and a decent price tag to go with it – a combination you can’t go wrong with.

ASUS is known to go with attention-grabbing designs for their high-end motherboards, usually making use of shields that cover a large area of the PCB or highly contrasting color schemes (usually black and red). In the case of the Maximus IX Hero, though, ASUS seems to have opted for a more subtle approach, the card coming with a mostly-black color scheme, and no elements that jump in the eye.

That does not mean that the IX Hero is not good looking – au contraire, the board has a subtle yet elegant feel to it, thanks to its large and well-designed heatsinks. The Maximus IX Hero has multiple 3D printer-friendly elements that allow customization and 2 areas lighted with RGB LEDs. Aura Sync technology is also supported, so you can further extend the lighting options with other Aura-compatible components.

On the hardware, the side is where the ASUS Maximus IX Hero shows its true strength. The board boasts all the features you come to expect from a high-end ASUS product. Overclocking on the Maximus IX Hero is quick and straightforward thanks to the ASUS Dual Intelligent 5-Way Optimization feature, which brings all the tools you need in one place. Its storage options include 6 SATA ports as well as two M.2 slots with support for various RAID configurations and support for Intel’s Optane Technology.

The audio side was not neglected either, the Maximus IX Hero featuring ROG’s SupremeFX 8-channel audio chip that delivers the crystal-clear sound and numerous enhancement options.

The I/O panel of the ASUS Maximus IX Hero features all the regular options: USB 3.1 (Type-C and Type-A), LAN, HDMI, DisplayPort, and even dedicated buttons for clearing CMOS settings – especially useful when overclocking. Wi-Fi and Bluetooth connectivity is missing, but that shouldn’t be a deal-breaker.