Projectors have reached a sweet spot, just in the last year or two, where the technology has been around just long enough and advanced just far enough that they have FINALLY become affordable to us little folk! Masses, rejoice. You, too, can watch the Super Bowl on a 10-foot screen.

With all that advanced tech, it doesn’t surprise us that there’s a vast array of features and capabilities to pick and choose from when deciding on a projector. So many factors come into play—the size of your space, the type of media you want to display, the setup of your room, whether mobility is important, the kinds of devices you want to connect… and the list goes on. Confused? Luckily, you don’t have to be! We’ve compiled a list of some of our favorite picks for less than $1,000, specs and all. 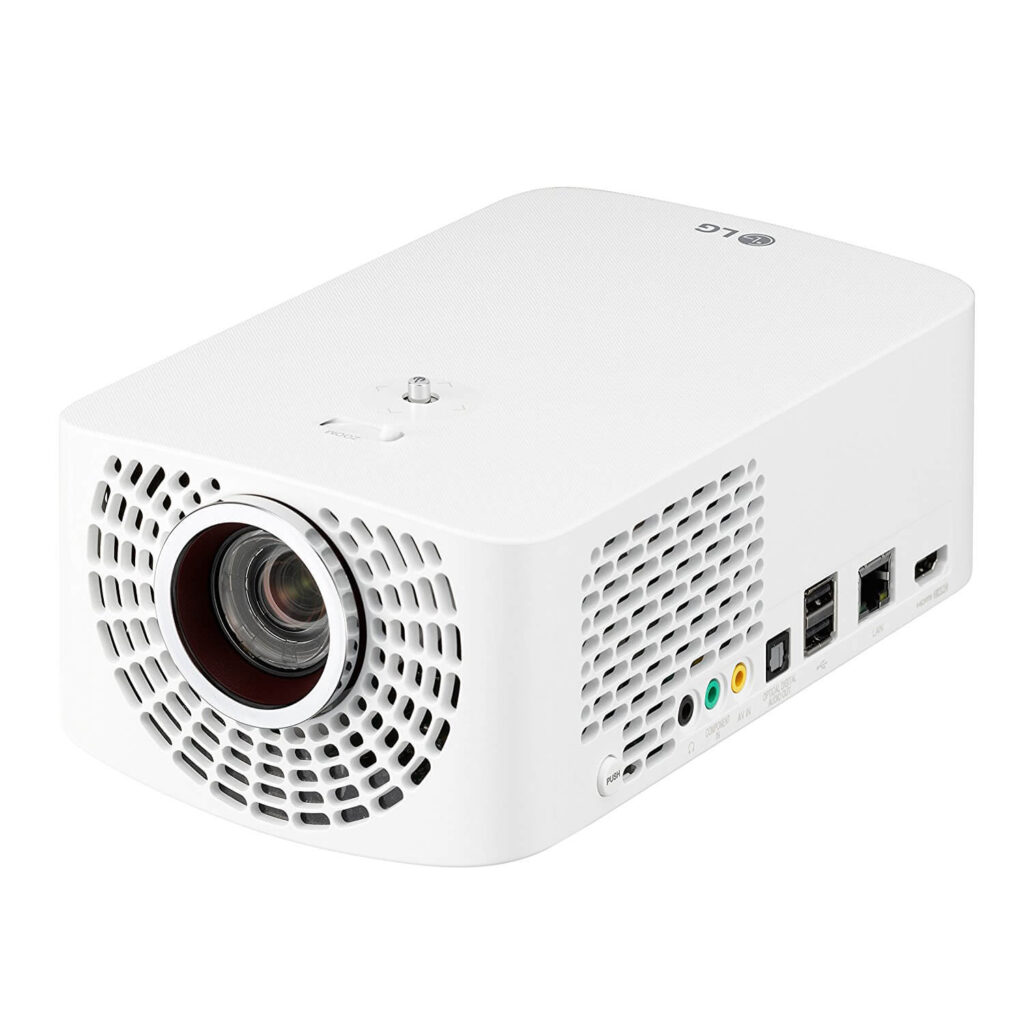 This smart projector is a stunner with full 1080p HD picture and a huge, 120-inch screen with 15,000:1 contrast ratio. With those kinds of stats, the screen can easily get much larger without losing picture quality. We’ve been impressed by the vivid, sharp picture and the easy, projectors-for-dummies set up. Sometimes projectors can be difficult to adjust to get the screen just right—but this one comes with four-corner automatic keystone adjustment for a perfectly balanced image sans finagling. If you’re into customization, though, multiple settings allow for different kinds of uses (text-heavy, HD, cable, etc.). This is a projector that feels like a big-screen TV. We also like that the projector includes Bluetooth sound out and LG Smart TV content. Great deal, great projector! 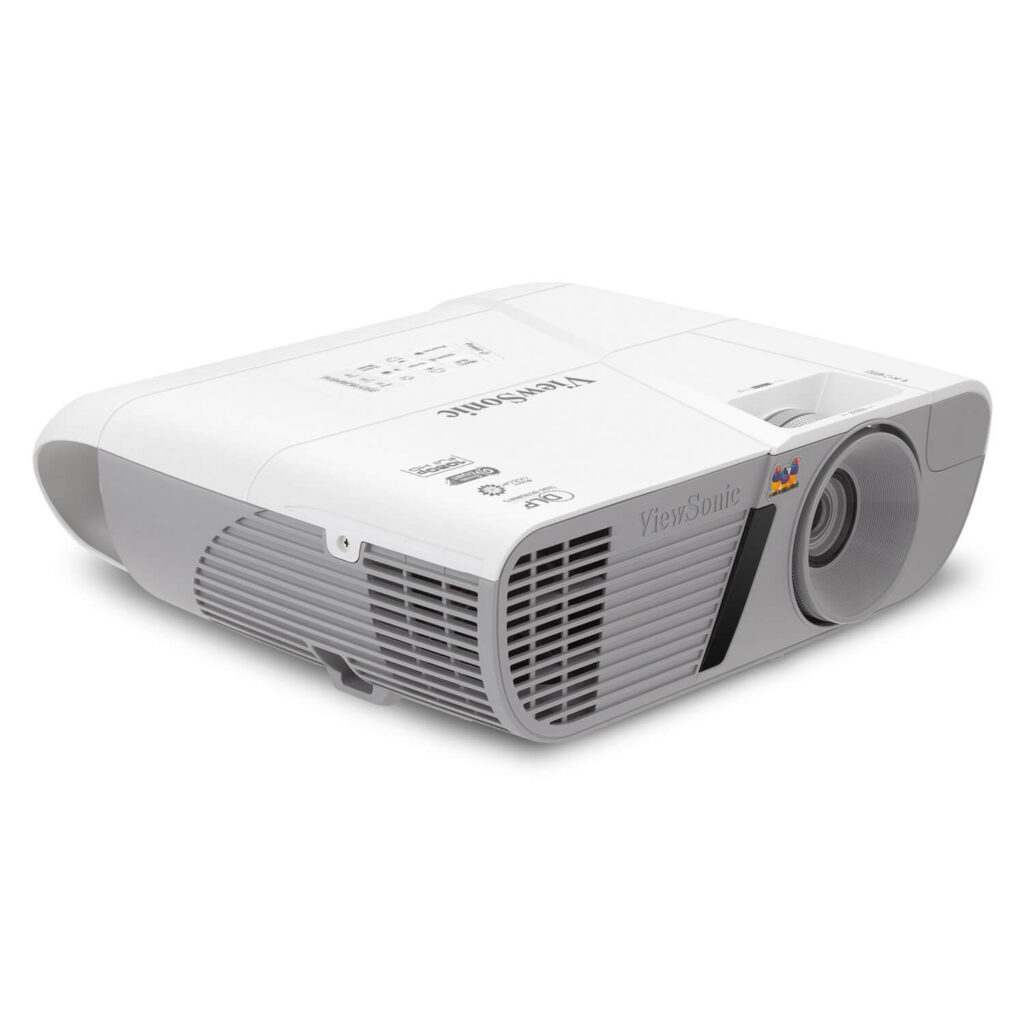 This ViewSonic comes with some cool features that really set it apart. For security nuts and secret agents, it comes with a cable lock slot and a secure MHL/HDMI input in a hidden compartment, for discrete wi-fi streaming. For entertainment junkies, it’s both 3D and HD compatible. And for clutter Nazis, it’s got a great cable management system to keep the cable mess at bay. For the rest of us, it offers a fabulously bright and tight projection screen with accurate colors and a beautiful picture (the contrast ratio is 22,000:1!). Did we mention the screen size stretches up to a massive 300 inches in dazzling HD? And the short throw ratio brings big-screen viewing to even small spaces. 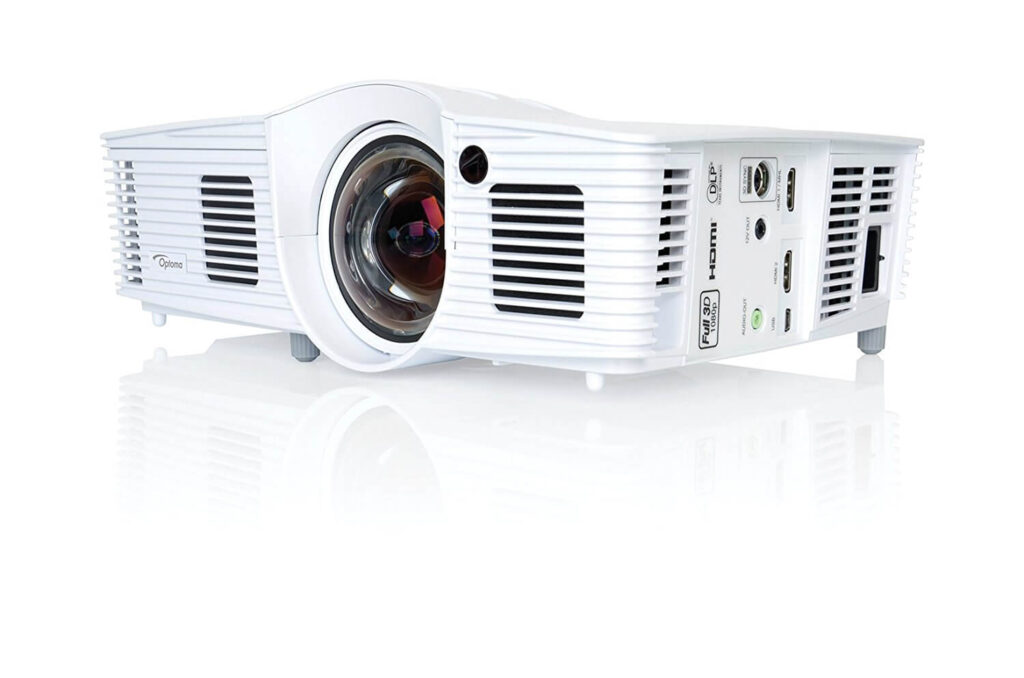 This projector is loaded with features we don’t normally see in this price range. A 12v trigger lets you connect to your projector screen so that the screen can automatically roll down when the projector is turned on. The 3D compatibility sets it apart from its peers, too. But where this projector is most at home is gaming. Just turn on the gaming mode, sweet and simple. With auto color correction, blacks stay true and brightness is adjusted according to each frame—so the light scenes don’t look washed out and the dark scenes can still be seen with lots of detail. The lag time is less than 14 ms, meaning excellent response and smooth motion. Perfect for shooting bad guys in COD. Movies look great as well in bright colors, without the dreaded rainbow effect. As a 1080p projector, Blu-ray is the way to go for jaw-dropping picture quality (especially in a dim room), but TV and standard def movies look great as well. This projector is short-throw and lends itself to about as large a screen as you can fit on your wall. We should mention the auto-shut off feature, for those of us who fall asleep in front of the TV and wake up with the LotR theme music bleeding out our eyeballs. No worries, couch-sleepers. We’ve got you covered.

If you’ve got a little more money to spend and you’re looking for the best in gaming, we highly recommend the BenQ HT2150ST gaming video projector. In 2016, this projector won the Editor’s Choice award over at Projector Central. Noted for its rapid response time (only 16 ms latency) and 6x RGBRGB color wheel, games feel natural and colors look on point. We love the outstanding brightness and smoothness of this projector. We also love that the different settings can be customized for the best movies, games, and television. The built-in speaker is pretty good for anyone who doesn’t have a sound system handy, and the fan is surprisingly silent. All this—plus the short throw ratio and automatic keystone correction—makes this a flawless gaming projector. Just set it up on your coffee table and go, Mario.

Best for Impressing your Friends 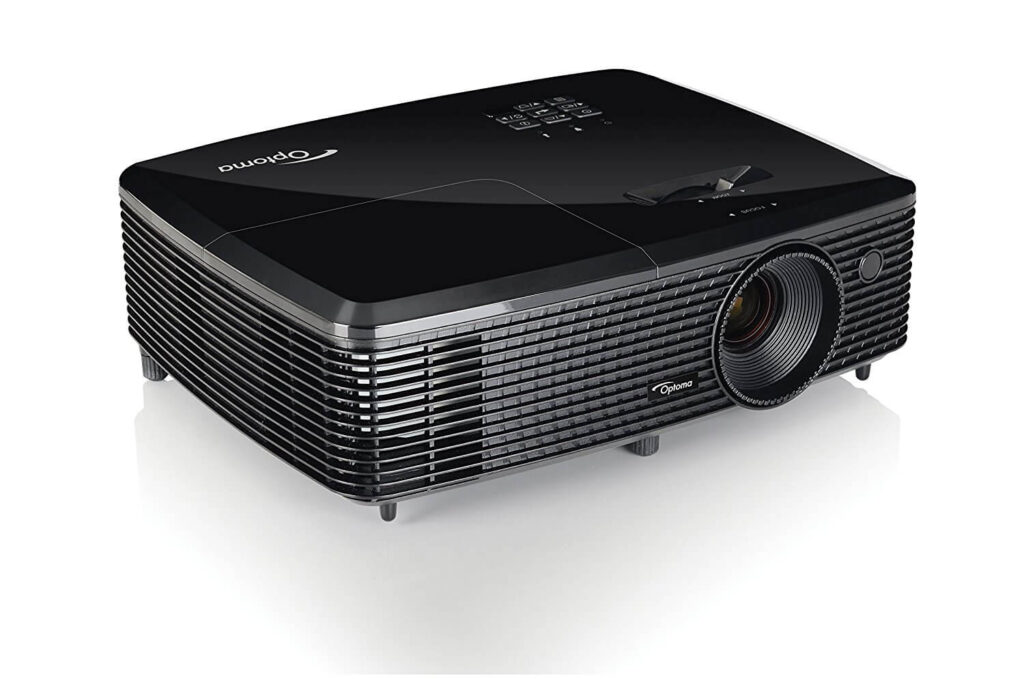 Don’t you love a good deal? Here’s one for you. This top-of-the-line projector boasts features and quality we usually see at much higher price points (think thousands). For just over $549, it’s extra bright at 3,000 lumens, with 1080p native HD resolution and 3D compatibility. The brightness and amazing image quality make for a screen that can be used during the day (gasp!), even without cave-like conditions. Even dark scenes look great and detailed with high contrast and color accuracy. It also includes a 12v trigger, for connecting a screen to the projector and automatically lowering or raising it with the projector’s power on/off. The contrast ratio is excellent at 23,000:1. All the ports you need, including MHL v1.2 enabled HDMI, give the greatest in entertainment options. Hook up your streaming device or even your cell phone and cast the image onto a 300” screen! And with a 10W speaker, you can still enjoy House of Cards even if you haven’t set up your surround sound yet. Go ahead and make your friends guess how much this projector set you back. Go ahead. Make their day.

Per its name, this is a projector for the pros! It features double HDMI ports, automatic keystone correction, MHL support, and the best in image quality. Using widescreen ultra-extended graphics array, it supports widescreen displays in stunning HD. If you’ve ever tried typing or reading (especially small print) using a projector or a TV screen, you’ll appreciate that the superior resolution allows easy readability without eye fatigue! We like the extra bright display (3200 lumens), both in whites and in colors. Speaking of colors, they look oh-so-vivid and accurate. Oh, and—da da da da!—it’s wireless, baby! It even features a handy QR code that can be scanned with a phone or tablet to set up instantly. And the 10,000-hour lamp life doesn’t hurt, either. What’s more, Epson has included a padded carrying case for added portability. 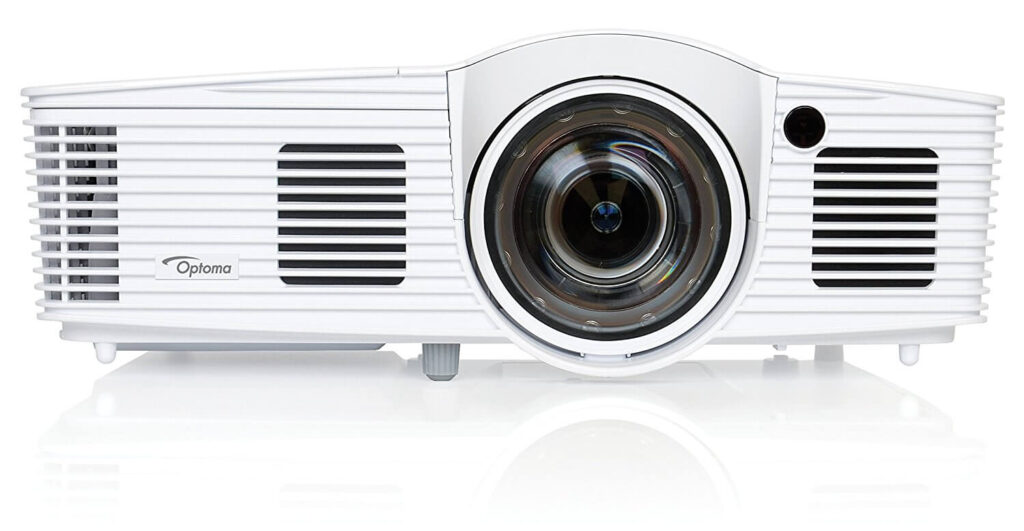 Optoma advertises this as an office projector because of its rugged build and durability, included carrying case, and ability to fill a lit room. And it is all those things. And we don’t think it should be limited to professional environments alone. The short throw ratio makes it perfect for small spaces—be it a conference room or a dorm room. The 3000 lumens display gives a great image even with the windows open—whether it’s daytime in the office or daytime in the house. And replacement bulbs (if you EVER need one with the lamp-saving Eco+ technology) are downright cheap. And then Optoma went and changed the game by adding a VESA 3D sync port, a 12v trigger, dual HDMI ports, MHL support, and a super silent fan. Then there’s the awesome 20,000:1 contrast ratio that makes text and images alike crystal clear. Work or play—or maybe kind of both? 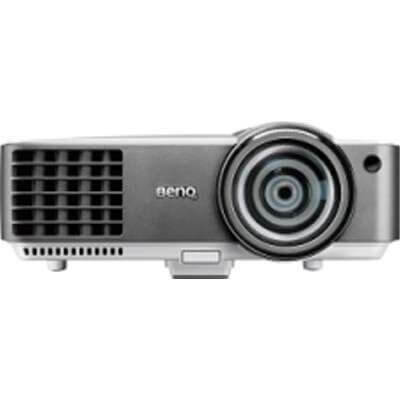 Get your class’s attention and keep it with this short throw projector specially made for educational purposes. With a super long 10,000-hour lamp life and a bright 3,000 lumens display, it also supports full HD Blu-ray images. But here’s the cool part: Eco Blank mode allows you to “blank” the screen when you want to turn your audience’s attention somewhere else—and Eco Blank mode turns on automatically if no source is detected. We think your administrator will be cool with the energy savings, and you’ll be cool with the 3D capability and excellent 13,000:1 contrast ratio. We also like that it features both front and rear projection modes and all the ports we need.

Best for Turning on the Lights 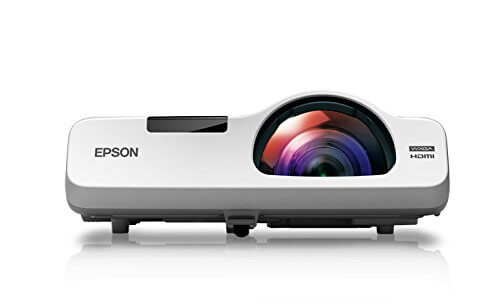 This projector is so bright! A brightness of 3,400 lumens is nothing to blink at (or is it? Wa wa.). The short throw ratio is excellent for small rooms—or to avoid disruptions from oblivious wanderers stumbling in front of the screen. Argh. The widescreen pumps up the awesome factor of this projector, as does the 3LCD technology that projects vivid, smooth colors with high fidelity and no rainbow effect. Best part is the wireless sharing that can be done through the projector, even with multiple devices simultaneously. If you’ve got a smart phone, that is all you need. It’s easy. (All together now!) 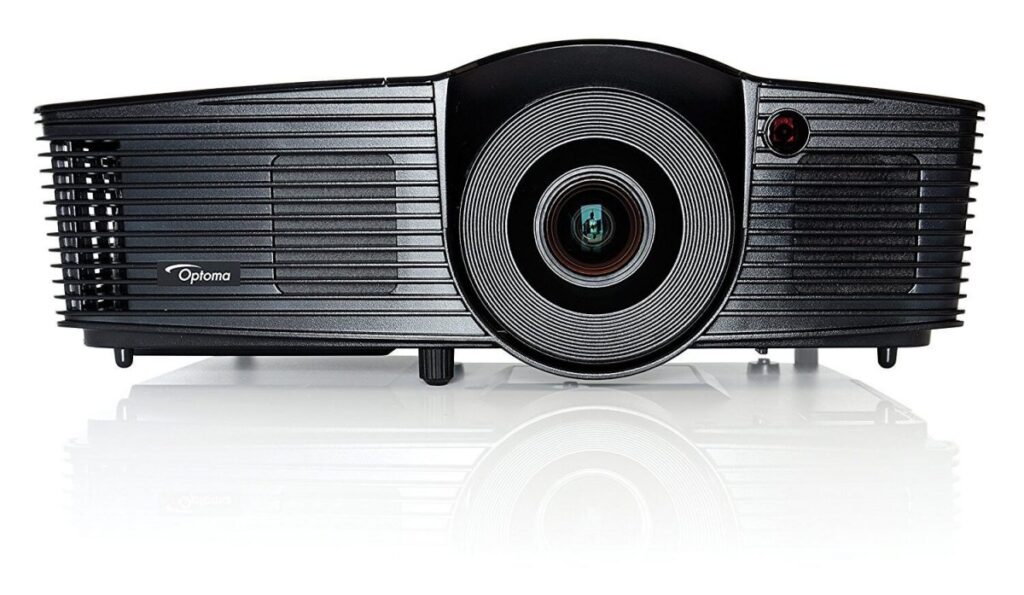 Anything you can do this projector can do better. Native HD 1920 x 1080 resolution makes this one of the sharpest, clearest pictures out there. The brightness is impressive at 3,000 lumens, and the contrast ratio is a whopping 23,000:1. This projector is MADE for outdoor football games or watching Jaws in the pool (if you haven’t tried that, you haven’t truly lived). Add in the VESA 3D sync port, built-in speaker, 12v trigger, double HDMI ports with MHL support, a quiet fan, and enhanced black levels. Ready for family movie night? Us too!