The new Intel x299 chipset has brought around the new enthusiast grade CPUs from Intel. Including the 10-core behemoth that is the i9 7900x.

Of course, with a new chipset, comes new motherboards, so if you are thinking of picking up one of the new x299 processors, it is important to match it with the correct motherboard that works for you.

It is also worth noting that this chipset is really aimed towards enthusiasts that can take advantage of all the cores that are on offer. You are looking at over $1200 for the 7900x and a motherboard, so make sure if you go for it, that you will get your monies worth.

With that said, what is the best motherboard you can get to accompany your brand spanking new CPU? Well that depends on what exactly you want. In this list though, I will detail some of the best in their class. 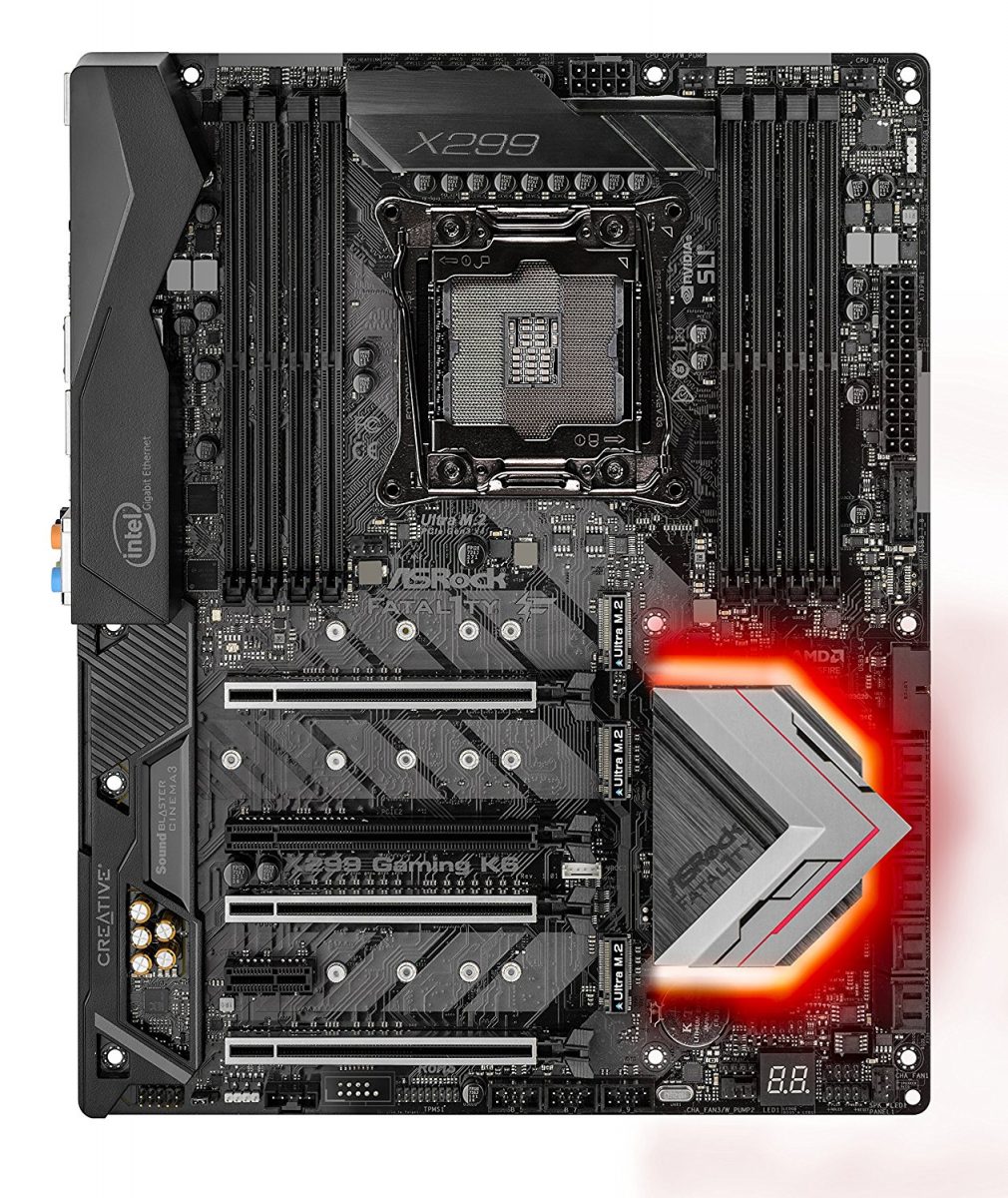 ASRock are known for making solid motherboards, whether they are budget or high performance. The ASRock Gaming K6 is a fantastic choice that isn’t necessarily budget, but rather has all you need for the price.

The K6 is a full ATX board featuring eight RAM DIMM slots for a max of 128GB of DDR4 RAM. It supports RAM speeds of 4400Mhz and has the capability to go even higher than that, so when RAM starts to come out past the current limits, this board will be able to keep up.

The K6 also sports dual gigabit Intel LAN, a very important feature for many people. It doesn’t have built in Wi-fi so if that is something that you need, you will need to look elsewhere.

The K6 supports SLI and Crossfire with up to three GPUs, which should be more than enough for the majority of people, especially as seeing Nvidia has limited SLI to a max of two on their newer cards. Their lower end cards don’t even have SLI capabilities anymore. The K6 has four 16x PCIe lanes and one 1x PCIe lane.

The K6 also features ten SATA ports, so there is more than enough room for all of your SATA devices, such as your SSD and Hard Drives. On top of that you also have support for three M.2 drives.

The K6 has more than enough fan headers as well to support any cooling solution, with 5 fan headers.

On the rear I/O, you have 5 USB 3 ports, and a USB Type C port as well. There are also USB 2.0 ports for your slower devices. Along with your classic PS2 Mouse/Keyboard combo port.

It also features the standard 7.1 sound input including an optical jack. There is also a button for easily clearing your CMOS after failed overclocking attempts. Very useful for the overclockers among us. It even has thunderbolt support.

On the subject of overclocking, the K6 has 11 power phases, which is more than enough to get great stable overclocks. The CPU and motherboard is powered by one 24pin connector and an 8pin connector.

The K6 also has full RGB support for those that are well into their colourful builds.

For the money, the K6 is hard to be beat on value, it has all of the features your regular user could need. The money saved on the motherboard can be reinvested into other parts of your build without having to sacrifice motherboard connectivity. 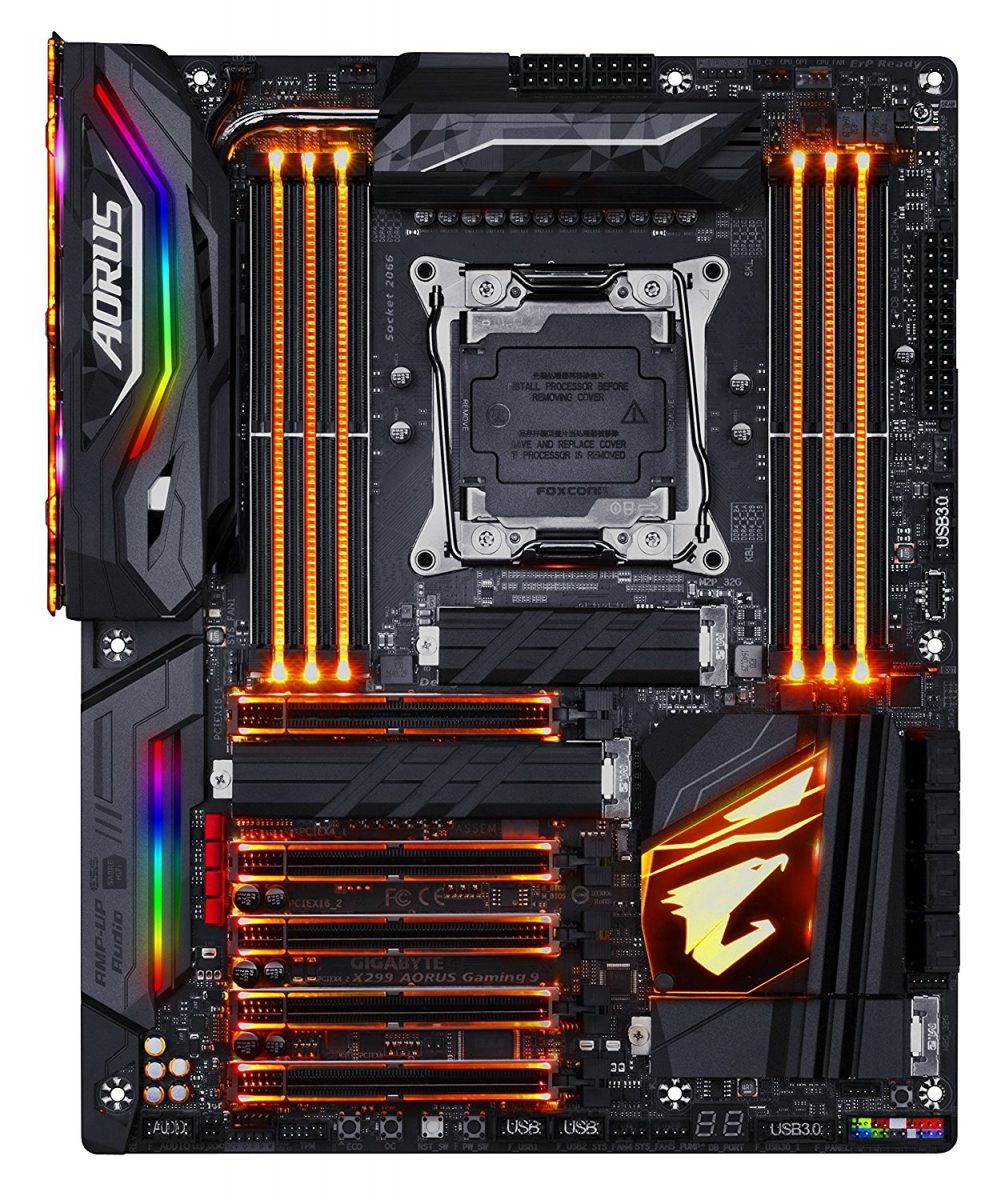 If you absolutely have the best of the best then look no further than the AORUS Gaming 9 from the motherboard veterans, Gigabyte. It comes in at a whopping $500 but you do get every single feature you want from your motherboard with no compromises.

The Gaming 9 is ATX and has eight DIMM slots for RAM, with full support up to 128GBs of DDR4 RAM rated for speeds over 4333Mhz. Making it very much future proof as far as RAM goes.

It features dual gigabit one using Intel and another using Killer technology, both of these are clearly labelled on the Rear I/O shield, a very nice touch.

The Gaming 9 can take advantage of quad SLI and Crossfire, so for that that absolutely require the most power to go with their expensive motherboard, the Gaming 9 has you covered.

The Gaming 9 has many SATA connectors to play with as well, with eight available for all of your SATA devices, more than enough for even the most storage heavy individuals. Alongside that the Gaming 9 features two M.2 slots, this is lower than competitors but what the Gaming 9 does is include their heat dissipaters so that your SSDs are not thermal throttling, a great addition.

The Gaming 9 has enough fan headers as well to keep your high-end system cool, with a total of 8 fan headers, you are sure to be able to use all sorts of top tier cooling setups.

The rear I/O is fantastic on the Gaming 9, it has all the features you could possibly want. It has your usual PS2 mouse and keyboard combo port and 7.1 sound input with optical out.

From there on the Gaming 9 really impresses. With 4 USB 3 ports, two of those being high amperage so you can charge your devices quickly. It has 5 USB 3.1 ports, with one being of the Type C variant. The board also features AC Wi-Fi, a nice addition but probably redundant for people with this kind of system.

I think the design of the rear I/O shield really deserves a mention as well, it is made out of a clear plastic and each port is labelled perfectly. The lighting features onboard (including RGB), even light up the rear I/O, so there is no need to be fumbling at the back of your PC with a torch trying to figure out what goes where.

The Gaming 9 is great for overclocking as well as it features 8 power phases. The board also has two eight pin CPU power connectors, so you can really push your CPU to the limit. The board itself is powered by a single 24pin connector.

This whole board has been designed meticulously to make sure that those with really high-end components have a board that can really get the most out of them. The board may be expensive but for its target market, it is sure to impress. 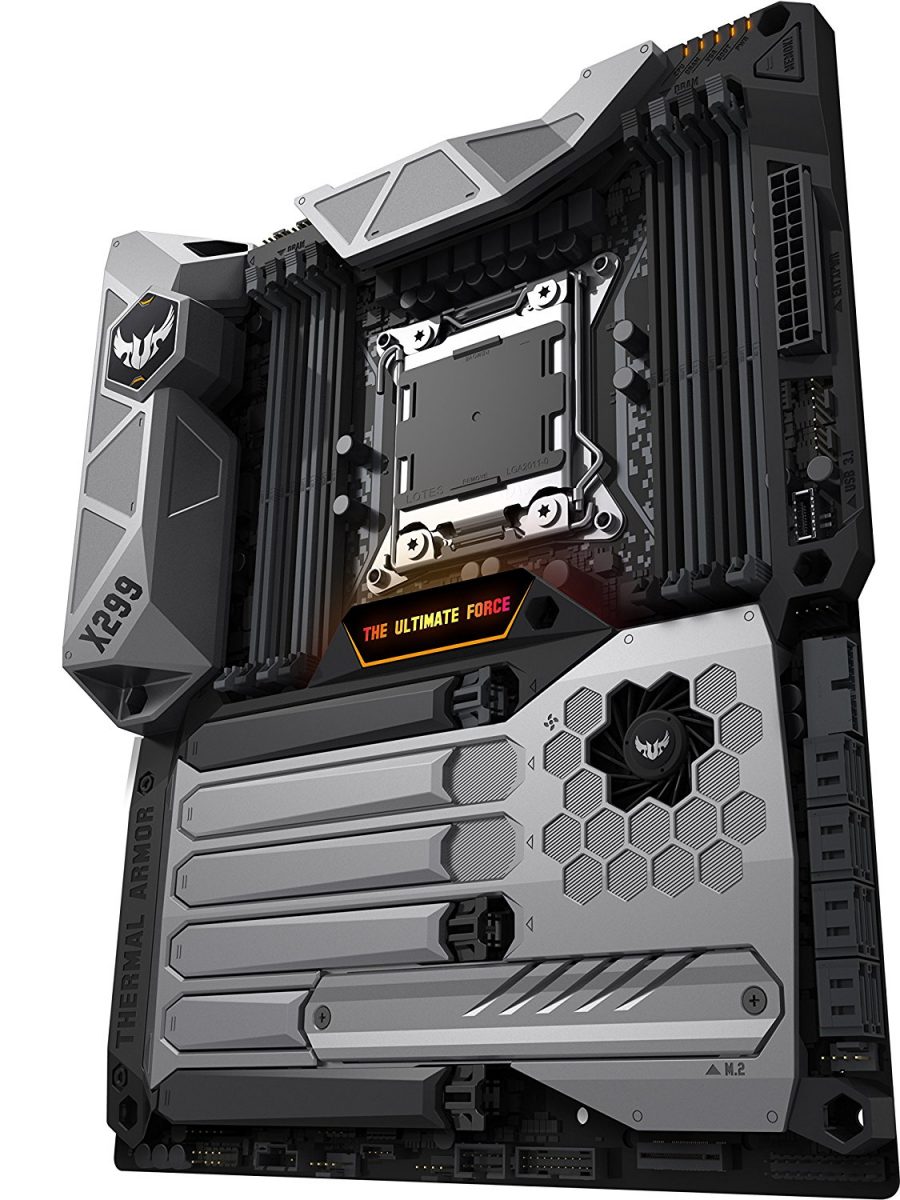 ASUS’s TUF series is known, well, for its toughness. It is made to make sure that your components can run 24/7 with absolutely no hiccups. The price is really respectable too, at just $335 you get a lot for your money.

The TUF foray into X299 for ASUS is no different, featuring that classic Thermal Armour that the series of motherboards has come to been known for. This time, Asus decided to even but some Thermal Armour on the back as well.

This board is fantastic for overclockers for a number of reasons. As previously mentioned, the Thermal Armour really helps to dissipate heat a lot more efficient, especially with the newly added rear Thermal Armour. Often the back of the board where the socket is can get hot, so passive cooling for it is a nice boon.

Of course, overclocking introduces more heat into your build, that is why the TUF Mark 1 comes with ten fan headers. That is more than enough to really keep your system icy cool. It also features 10 power phases, so it is a equipped to really deal with extreme overclocking.

It also features enough PCie 16x lanes for tri Crossfire or SLI setups. It has eight SATA connectors as well so you can get a lot of SATA devices into your system. The eight DIMM slots can house DDR4 running at 4000Mhz, which isn’t the highest X299 boards go, so a little disappointing in that area for those with the absolute fastest RAM.

Being an ASUS board, it supports their Aura Sync technology as well, though there is only one lighting zone.

This board is an overclockers dream, it features so many things that often get ignored, but the TUF Mark 1, really hits the spot.

These are just a small selection of some of the best X299 boards that are currently on the market. The price range is steep for the LGA 2066 socket boards, but every single one is jam packed with all the features you could possibly want.