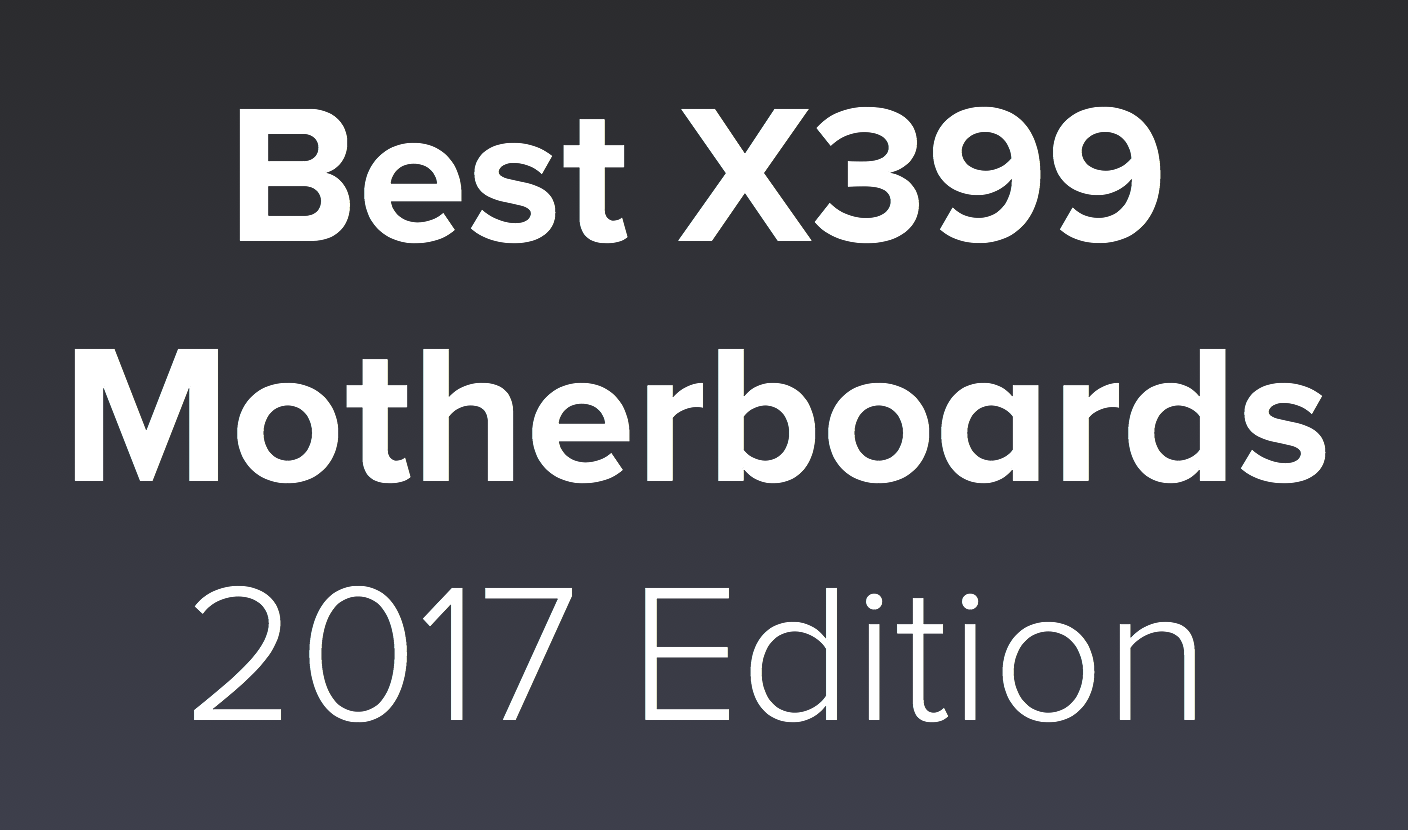 In 2016 an 8-core CPU was more than enough to brag about and anything higher than that was out of reach for the average consumer in terms of price. However, in 2017 Threadripper has changed that by providing a staggering 16 cores and 32 threads that work simultaneously to provide impressive levels of performance at the average consumer price point.

Threadripper is perfect for advanced computational tasks that are hungry for bandwidth, memory and need many cores to be active at the same time. However, in addition to the processing chip you need to consider the motherboard that will compliment it, and the best ones to pay attention to are the X399’s.

What’s so good about X399 Motherboards and Threadripper?

The X399 platform supports an impressive 128GB of memory and a quad core memory controller. This effectively means that RAM will need to be bought in sets of 4 for optimal performance. There are 64 PCI-express lanes and GPU’s can utilize up to 60 of these lanes.

A great feature of these boards is the one touch overclocking, which allows you to get even more from the Threadripper chip. Most boards support 8 USB 3.1 ports and 6 SATA’s.

There are a lot of similarities between the X399 boards, but there are also some differences which allows you to make a selection between them. In this buying guide you’ll be presented with the top motherboards to pay attention across a range of different categories. 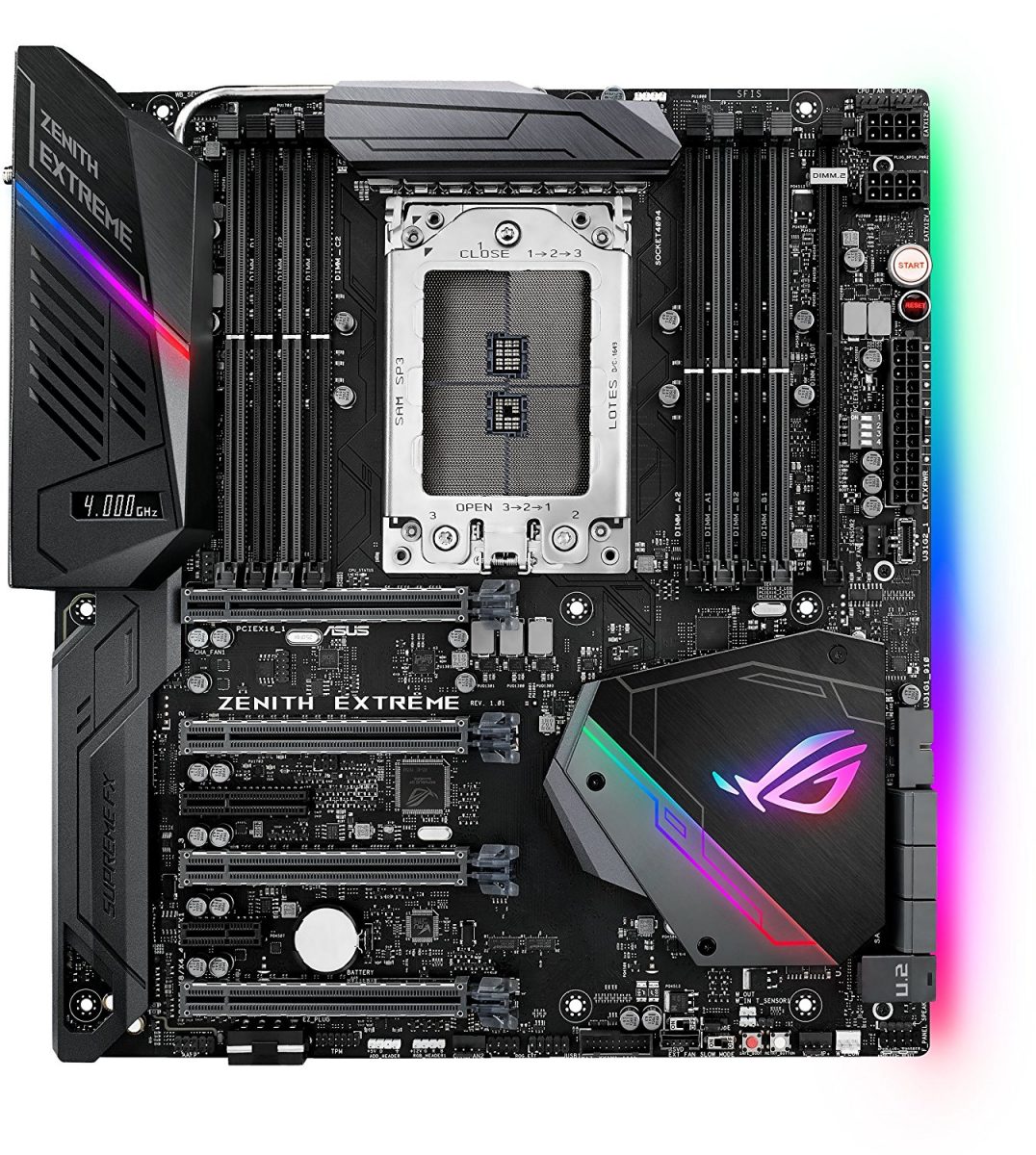 ASUS has a solid reputation of creating competitive gaming motherboards and their ASUS ROG Zenith Extreme is another example of that. It’s their primary offering for the Threadripper chip from ASUS and has all the core features you’d want in a motherboard. It also has a few features you won’t find elsewhere.

The package includes a sturdy design with a strong backplate that prevents the unit from bending and bowing. The purpose of this is to prevent the MOSFET to stay in direct contact allowing for uninterrupted cooling. Also there is a pre-mounted I/O shield, which allows for easy installation of the motherboard into the chassis.

Bundled with the motherboard comes a ROG Areion 10G Card, which is an expansion card that allows for 10GBps networking. It has a big heatsink to keep it cool while you transfer huge 4K files for example.

The speed of this motherboard is uncompromised. The DIMM.2 module allows M.2 drives to connect using a DDR4 interface, and it comes with an integrated heatsink. As you can see from the design of the ROG Zenith Extreme thus far cooling is a big consideration of this motherboard. The support for DDR4 memory is up to a massive 128GB.

The final feature we will mention is the 802.11 AD Wi-Fi that’s fast and lag-free – perfect for the modern day gamer. It allows for wireless connectivity of speeds up to 4.6Gbps. Therefore, you can enjoy 4K and VR without the worry of interruptions or flickering.

In conclusion, the ASUS ROG Zenith Extreme is perfect for those of you that want to spend a little extra and get all the bells and whistles that a motherboard can provide for the Threadripper. The combination of connectivity, performance and cooling is ideal for those seeking top levels of performance. 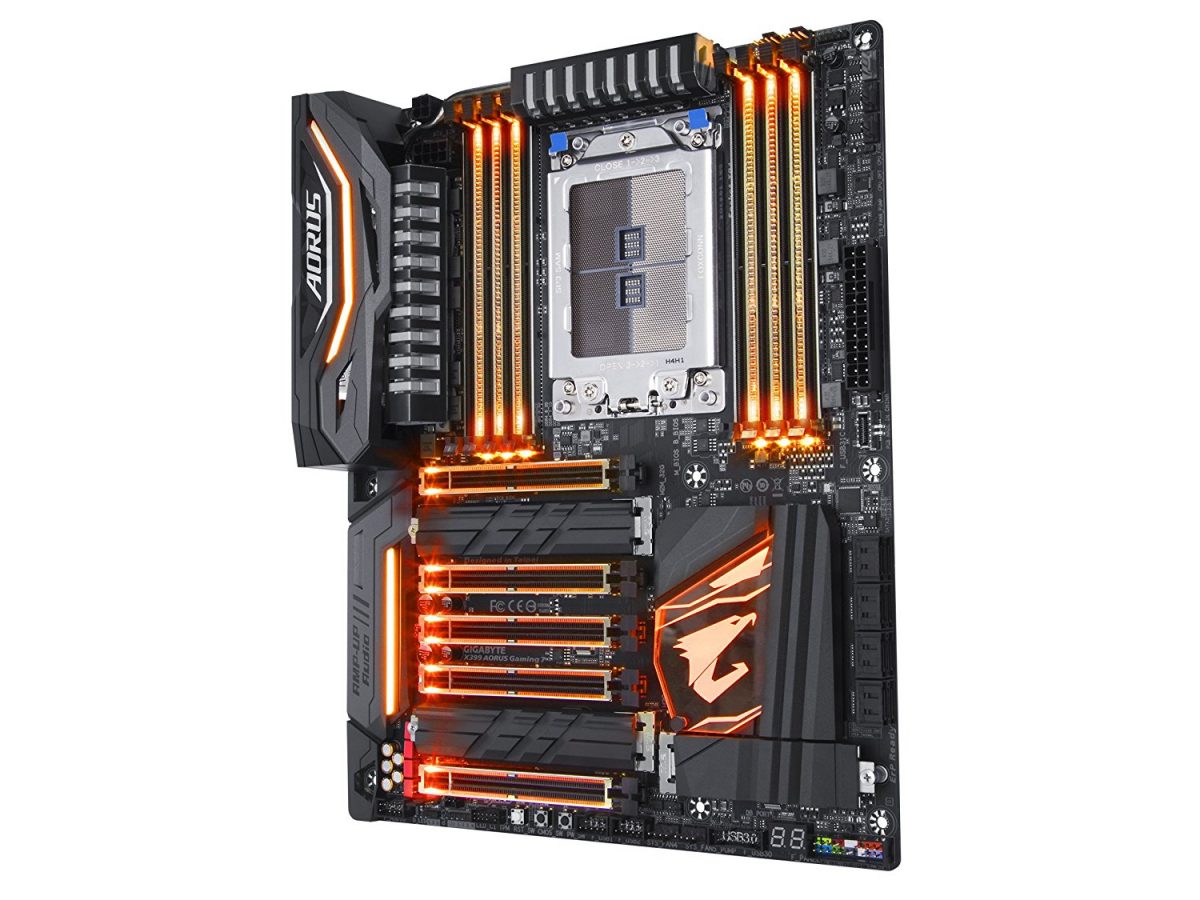 The Gigabyte motherboard of choice for the Threadripper is the Gigabyte X399 Aorus Gaming 7. It has a cool black and orange design that’s perfect for the gaming community. The array of features of this motherboard makes it worthy of attention, and you’ll find yourself more than impressed with what’s on offer here.

It comes with smart cooling and monitors temperatures on a second by second basis for both air and water based solutions. The Smart Fan 5 is a comprehensive cooling software solution, Gigabyte’s best yet. There are in total 9 temperature sensors and 8 hybrid pin headers.

There is a multi-Zone LED light design that allows those who care about aesthetics to play around with the look of their gaming rig. The amount of customizable options and spectrum of colors gives you plenty more options than most other motherboards on the market today.

Another feature worth mentioning is the triple M.2 with thermal guard. This motherboard supports triple NVME PCle x4 MN.2. Durability is the idea behind its design and it comes with a thermal guard which helps reduce the occurrence of bottlenecks and throttling. Also heat will be dissipated long before it becomes an issue for the system.

The connectivity is great here as you get USB 3.1 located at the front for easy access if the case supports it. Wi-fi and Bluetooth is also included allowing you to browse right away without the need to invest in a Wi-Fi card or dongle.

Overall, the Gigabyte X399 Aorus Gaming 7 is the perfect rig for overclocking because of the excellent cooling that can be found here. Pushing the Threadripper to its max potential may be tricky when it comes to temperatures, but this motherboard makes the task more than approachable. 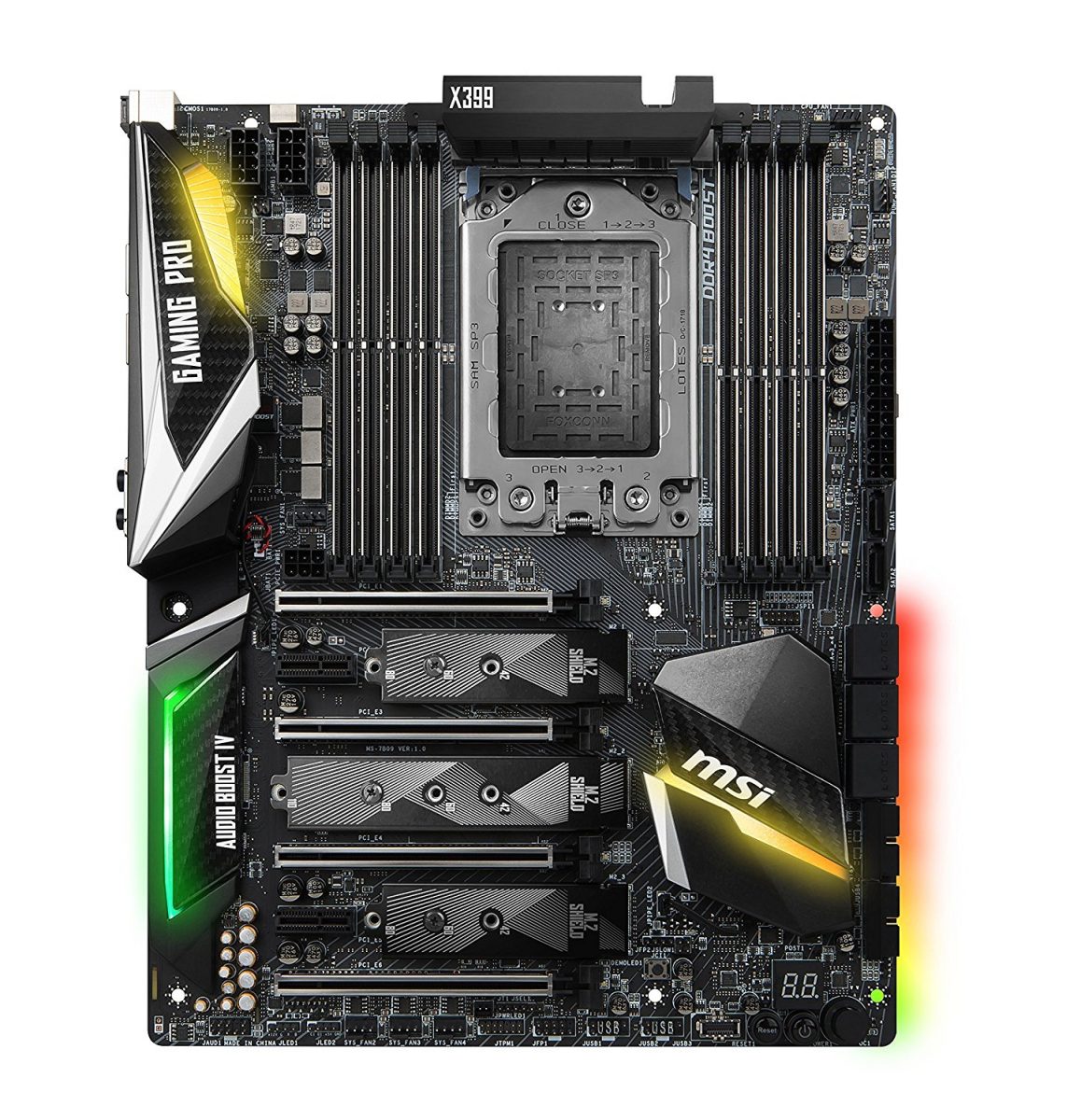 The offering from MSI is the MSI X399 Gaming Pro Carbon AC, which is competitively priced and more affordable than the first two entries on this list. This particular model comes with all the main features you’d expect from a high-end solution.

The M.2 shield cools the NMve SSD which reduces throttling and leads to higher overall performance. There is support for up to 32Gb/s using Express Gen3 x4. Other features include a PCI-E steel armor which means the VGA card will not bend.

Those who enjoy great audio will be happy with the Audio Boost 4 with amplifier feature. It’s optimized for gaming to have superb audio with the Nahimic 2+ unit. Then a dual ban wireless Intel Wi-Fi card reaching speeds of 867 Mbps can be used to connect to the internet right away.

When it comes to cooling the MSI X399 Gaming Pro Carbon AC has got you covered. There are plenty of fan headers that can be fully controlled to cool the system in any way you see fit. A graphical interface illustrates the vital characteristics of the system. 4 temperature targets can be setup for both the CPU and motherboard that are adjusted automatically. 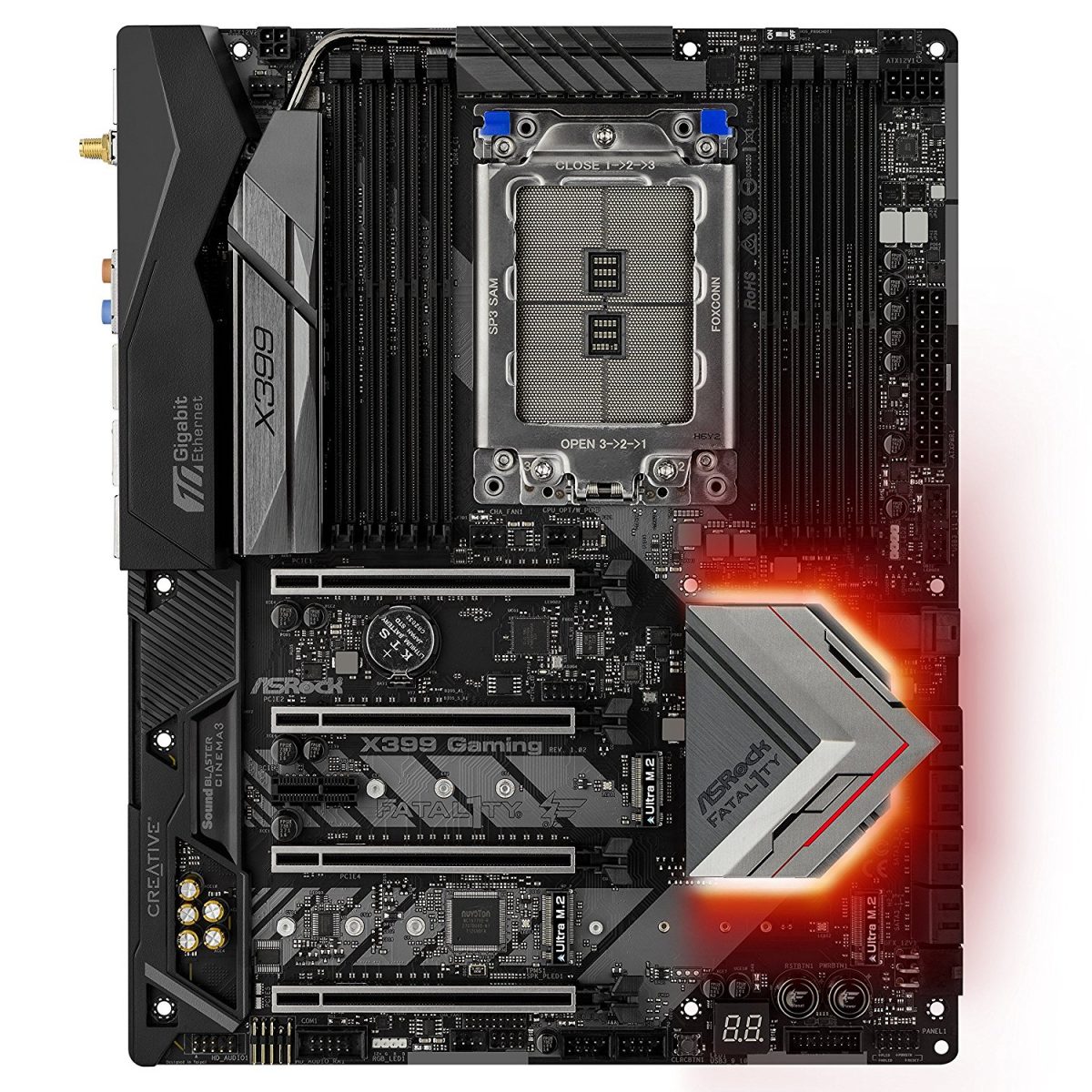 Even though ASUS has a very competitive motherboard the ASRock FATAL1TY X399 holds its own with a bunch of features including server-grade Ethernet technology, industry leading power filtering and superb drive connection.

It supports 4-way SLI, but the technology is rather limited as support is only for GTX and Quadro cards. However, for most this isn’t a problem as top-tier graphics cards will need to be utilized in order to take advantage of this motherboard.

Where this motherboard shines is the external storage solutions. There is a U.2 connector that allows the connectivity of hard drives and flash drives based on the NVMe technology. Primarily this type of technology was created in mind for the server market, but the average gaming consumer has shown that there is a demand for this product in their market too.

Furthermore, there is support for three NVMe SSD’s and two 3.1 A/B connectors. One of them is towards the front for convenient access while the other is located in the back. Finally, to complete your storage needs there are 8 SATA ports.

In terms of networking this motherboard meets any requirements you might have. Whether it’s an Ethernet network with the 10 GBPS AQUATINA ports, or the Dual Intel Gigabit Ethernet ports if you are using an older router.

It also comes with an 11-phase power delivery system, which aids the process of overclocking without damaging your electrical components. Also separate power filtering is setup for PCIe lanes and installed memory.

In conclusion, the ASRock FATAL1TY X399 is a professional gaming motherboard that’s going to complement your Threadripper chip very nicely. This is especially true if you are in need of a flexible storage setup that allows for expansions down the line.

Which X399 motherboard should you pick?

After having familiarized yourself with the best motherboard options for the Threadripper have you no idea which one is the right choice for you? Pay attention to the specific features that each motherboard has. Every entry on this list complements the Threadripper well and you cannot go wrong with any purchase.

However, what will set apart one from the other is the way the motherboard is implemented and what features are present in one model that might not be available in another. If you’ve made the investment into a Threadripper chip then do it justice by pairing it up with one of the X3999 motherboards on this list.

Martynas
Related Items
← Previous Story Is a 1440p monitor worth it if only 24 inches?
Next Story → Best Arcade Sticks/Fight Sticks for Gaming – 2018 Buyers Guide