Home / Guides / Is G-SYNC Worth It? FAQ’s about G-SYNC Technology

Is G-SYNC Worth It? FAQ’s about G-SYNC Technology

If you are a PC gamer you know how important it is to have a great monitor.  Outstanding picture quality, the least possible lag and other factors are quite important.  Luckily, in today’s monitors most everything that you might want can be found in a monitor at a rather reasonable price.  Every now and then a company puts out some new feature and you need to look into it.

Sometimes the feature in question is merely a fancy name for something that your screen has or you don’t really care about.  Other times this becomes the new hotness, that makes your games a smoother, better experience.  That is the question to be answered now that G Sync is out in a number of monitors.  We’ll look into what it is, what it is supposed to do for you and if it is worth the cost.  Then we’ll highlight a few monitors that have this capability.

What is G Sync?

If you are a PC gamer, you’ll surely know that the newest games can push the limits of even the newest PCs.  In many cases you’ll find that some games can tax a slightly older computer nearly to the point of failure.  There are a number of different problems that can come up, such as stuttering, tearing or just input lag.  Before we take a look at what G Sync does to address these issues it might help to take a closer look at the problems.

The first problem that you may run into while running a game and pushing your graphics card to its limits is tearing.  This happens when the GPU or graphics card falls out of sync with the monitor.  This could be from the graphics card struggling to keep up or the monitor’s refresh rate being set a little to high for the system.  Either way, the GPU ends up sending a frame in the middle of the monitors refresh cycle.  The monitor now has two frames and it tries to present both of them.  But on the screen you merely see parts of each of the frame and can’t really make sense of either.

The way to handle this had been to enable vsync.  This helps to keep your GPU in sync with your monitor, normally at a 60 Hz refresh rate.  While this keeps screen tearing from plaguing your gaming session, it can introduce a visual stutter or a lag between inputs and the action happening on screen.  While these are merely annoying for playing on your own, with any sort of multiplayer these can cause you to rage quit.

A G Sync board from Nvidia is a hardware board that has some memory, among other components.  This card monitors the timing of when your monitor draws the frame and begins the next frame.  It becomes a gate which will only allow your GPU to send the data for the next frame at the appropriate time.  It can also store the previous frame in its memory to compare it to the next frame.  All of this adds up to decrease lag time and eliminate other visual artifacts, like tearing and stutter.

Because of the set up for your monitor you’ll find that most animation appears smoother when you have G Sync enabled.  And since it can work with a wide variety of refresh rates it is being adopted by a number of monitor manufacturing companies.  One thing to note though is that you need both ends of the system to support G Sync to make this work.  Both your graphics card and your monitor need to be enabled or this solution won’t work for you. Luckily most of Nvidia’s more powerful graphics cards have the ability already.

As with most new break through the rival companies are not usually far behind in releasing their own versions.  In this case AMD has announced a similar system called FreeSync.  They claim that you won’t need any additional equipment (other than the FreeSync AMD graphics card), so long as your monitor supports Variable VBLANK.

Is G Sync Worth It?

When it comes down to the question if G Sync is worth it to you then you need to ponder a number of things.  The first is what do you use your computer for?  If you are just surfing the web, checking social media and typing papers, this might not be something that you really need to pay extra for.  However, if you do a fair bit of video work this could definitely help, especially if you’ve noticed some problems while running back through your production process.  Lastly, if you are big into PC gaming, I think that you already know at this point you are going to need to make sure your system supports G Sync for the best gaming experience.

You’ll also need to consider your monitor and your graphics card.  First check the card that is in your computer to see if it supports G Sync.  Obliviously, it is a lot easily to just have to pick up a new monitor than to change out a graphics card.  But even if your card doesn’t support it yet and you are just looking at a monitor with the thought of a new card or system in the future, it wouldn’t be bad to make sure the monitor supports G Sync now.

If you are looking at a G Sync capable monitor, you are in luck.  We have rounded up 3 great examples that you can order today and so long as your graphics card will support it eliminate tearing and stutter once they arrive. 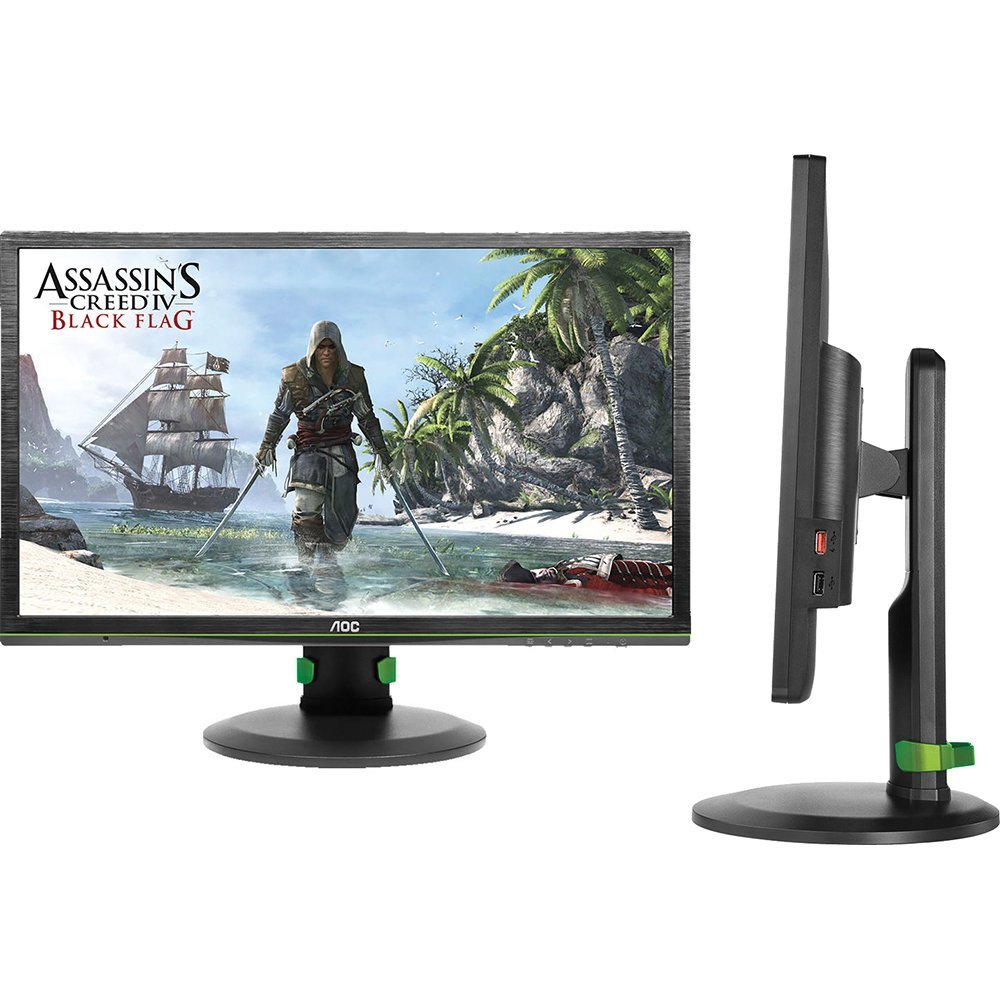 The AOC G2460PG is a 24 inch monitor that sports both Nvidia G Sync as well as the Nvidia Ultra Low Motion Blur.  It boasts a screen resolution of 1920 x 1080, so you get full HD resolution for your gaming.  Additionally, it is Nvidia 3D ready if you are.  This one comes with a display port as well as a USB 3.0 and 2.0 port for connections.  The monitor offers you a refresh rate of 144 Hz as well as a 1 ms screen response time.  And one of the nicest features is that it has a budget friendly price tag of merely $360.

If you look at the list of ports you’ll notice that any HDMI connection is missing.  There are also some reports of people having difficulty calibrating the screen for your uses. 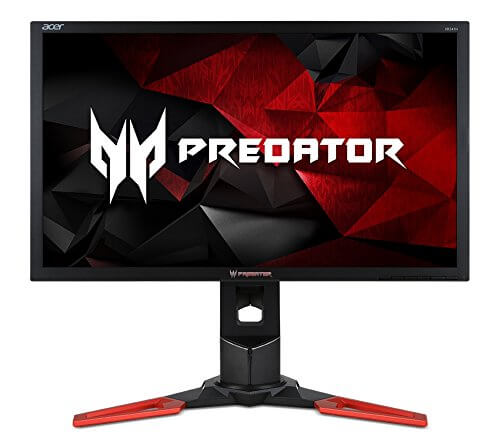 The Acer Predator 24” is another stylish 24 inch monitor that supports G Sync.  This one also sports a 1920 x 1080 resolution for HD picture quality.  This is another monitor that claims a 1 ms screen refresh time and a standard refresh rate of 144 Hz.  They also claim that this monitor is capable of producing 1.67 million colors to give you quite the wide pallet of color options to give your games a more realistic feeling.  The price on this one is another wallet friendly $290.  As far as connection options go, this one has 1 HDMI and 1 Display port.

Again, we go to the ports for a drawback.  In this case there seems to be a lack of USB ports.  While this isn’t as much of an issue as not having a HDMI port, it is nice to have a few USB ports easily accessible. 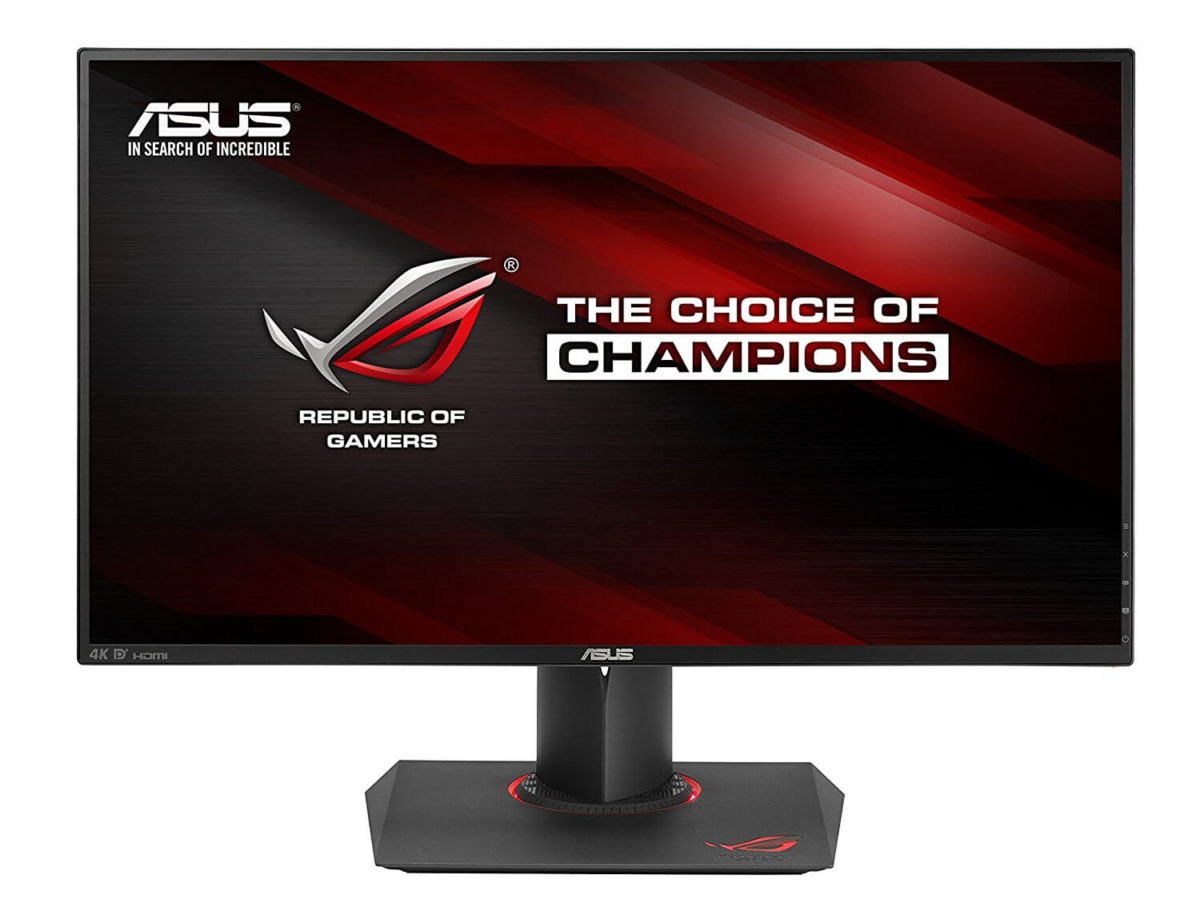 The Asus PG27AQ is a 27 inch wide screen monitor that sports G Sync.  This one boasts 4K Ultra High Definition resolution as well as being certified flicker free.  Additionally, it has a blue light filter to reduce eye strain, especially in low light conditions or for long hours of viewing.  As far as connections go this one sports a DisplayPort, an HDMI, dual USB 3.0 ports and even an Audio I/O.  The stand is built with ergonomics in mind letting you easily move it to any position that is good for you, including turning it vertically.  It is also built to easily be used in a multi-monitor set up.

While the company boasts this monitor as 4K Ultra High Definition, when you look at the resolution it is really only 3860 x 2160.  This wouldn’t be as much of an issue, but the price tag of $970 is a bit much for a 4K monitor that isn’t up to full 4K.

So, at the end of the day is G Sync worth it?  That really depends on what you are doing with your computer.  You’ll need to remember that you will need both a G Sync capable GPU and monitor in order to use this solution to tearing and stuttering.  But if you are in the market for a new monitor there is no reason to not get one if you are able to afford it.  If you are a PC gamer, it is nearly a necessity.

Is there anything that we forgot?  Do you have experience with a great G Sync monitor?  If so, let us know about it in the comments section below.