The size of a PC used to be a solid indicator of its performance, the general rule being that the more massive a PC was, the more likely it was for it to house some monstrous hardware. As technology advanced, though, size stopped being so relevant, and there’s no better proof than taking a look around – chances are your current smartphone is more powerful than the PC you had 10 years ago, while fitting comfortably in your pocket. That doesn’t mean size is not relevant at all: big rigs are still around today, as enthusiast-grade hardware usually requires a lot of space and tremendous cooling systems; however, for the casual user that doesn’t need the ultimate hardware, a build doesn’t necessarily have to be big and bulky to be powerful, and small form factor (SFF) PCs are the perfect example.

Looking to jump on the SFF PC bandwagon, but don’t really know where to start? You’re in the right place: we put together a list of the smallest mini-ITX cases that can house a GPU, allowing you to get the best mix of size and performance. 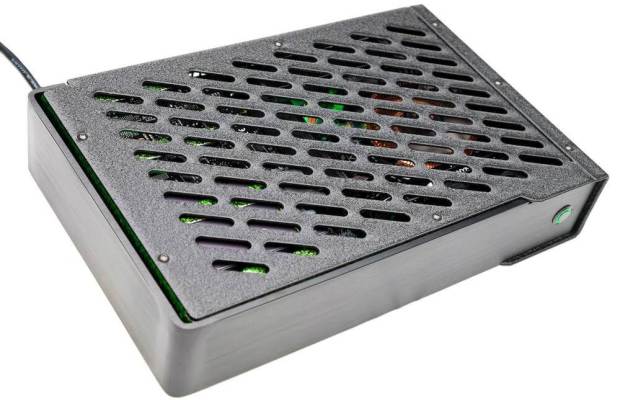 If you’ve never heard of NFC Systems or the S4 Mini, that’s because the company is a very small one and the case in question is not yet readily available, being in pre-order state at the time of writing. Be that as it may, the S4 Mini is one impressive case: with an interior size of 324mm x 203mm x57mm and a volume of only 4.3L, the case still offers enough space to fit an 8-inch dual-slot GPU (enough for a GeForce GTX 1070 Mini), dual 2.5” storage drives, a CPU cooler with a maximum height of 40mm and two 120mm fans. Power-wise, the S4 Mini can use a Pico or HDPlex PSU.

A decent airflow is ensured by the vented sides of the case, with a small downside being the fact that, due to the fairly large cutouts, the internals might be somewhat visible. You shouldn’t worry much about that, though, as the case is more bound to attract attention with its sleek design and its anodized aluminum front panel. 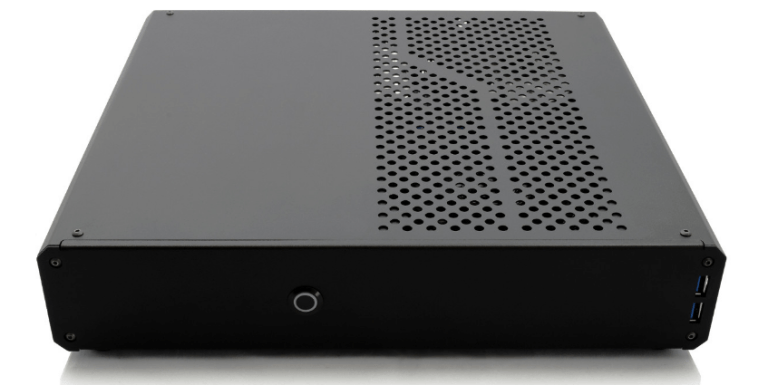 Dubbed as “first truly console-sized gaming PC chassis”, the Dr Zaber SENTRY is a crowd-funded project destined to close the gap between consoles and gaming PCs. With an internal volume of roughly 7 liters, the SENTRY is considerably larger than the NFC S4 Mini, but it is thus able to fit more hardware. Its highlights are the uses of SFX/SFX-L power supplies, which broadens the range of PSUs you can opt for and, more importantly, the GPU clearance of up to 305mm – enough to fit a GTX 1080 Ti or other fairly larger GPUs featuring stock or aftermarket cooling solutions. In terms of storage, the SENTRY can accommodate 2 x 2.5” drives on a central rail between the motherboard and the GPU, with additional bays available in the GPU encasing if a small form-factor GPU is used.

The specs of the SENTRY look quite impressive, but they also have a price tag to match – the case is expected to be available at a price of $235, and the waiting time might be a significant one, as crowd-funded projects are not exactly renowned for timely shipping. 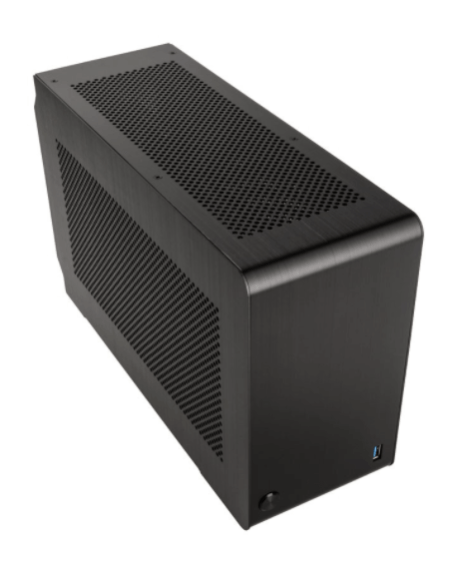 Another crowdfunding success comes in the form of the DAN Cases A4-SFX, a minimalistic case that proves that SFF systems can be suitable for gaming. To stand up to the claim, the DAN Case A4-SFX features an unconventional design that puts the motherboard and the graphics card back to back to optimize cooling and space – after all, the A4-SFX has a volume of only 7.2 liters. The main advantage of this configuration is its cooling potential: since both components face a side panel, they each get direct access to air intake. With GPU support of up to 306mm and a maximum CPU cooler height of 48mm, the A4-SFX can accommodate a wide variety of high-end graphics cards and CPU coolers, resulting in a cool and blazingly-fast system. The A4-SFX is compatible with SFX and SFX-L power supplies, and comes with 3 storage bays: 2 x 2.5” bays at the bottom (one obstructed if you go with SFX-L PSU), and another 2.5” bay in the front. 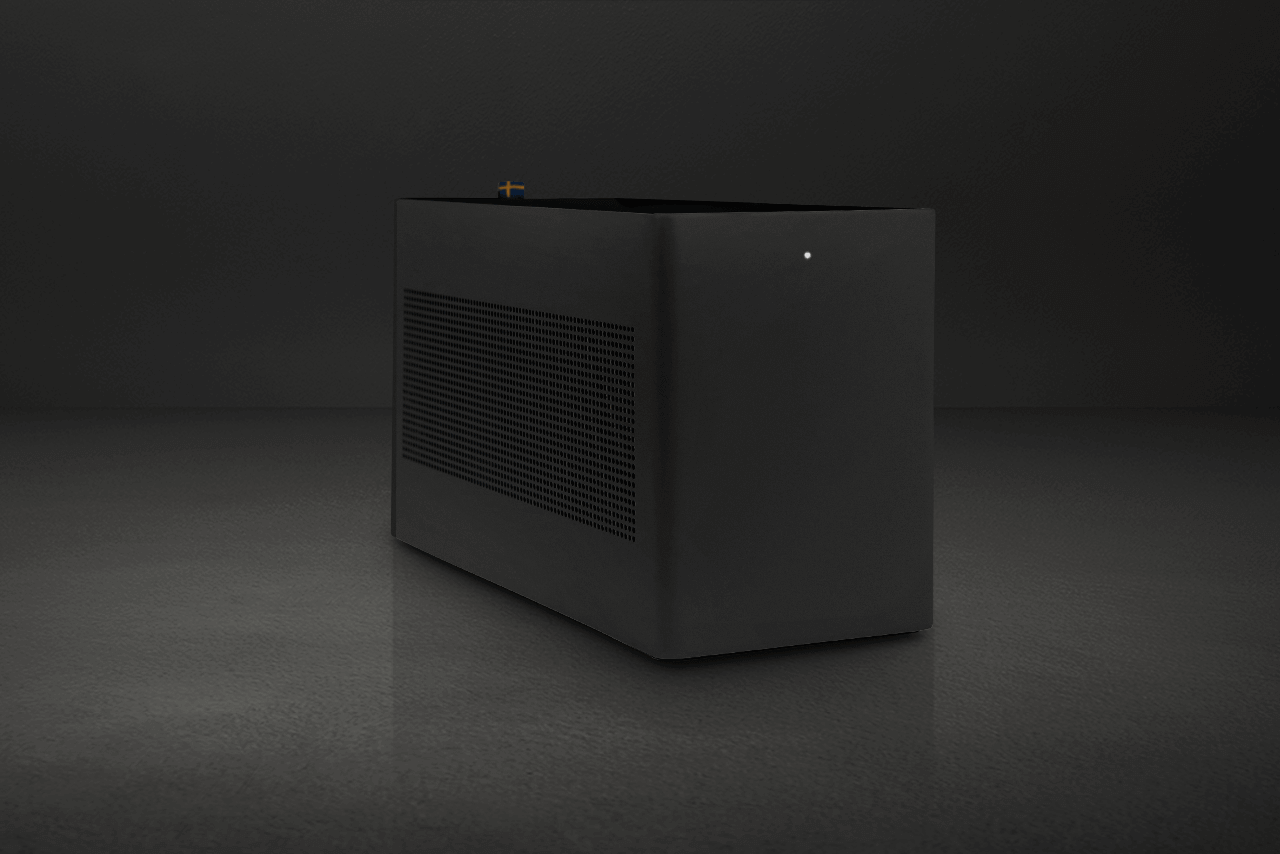 Despite its ambitious crowdfunding goal of almost $300,000, the LOUQE GHOST seems to be right on track raising the funds and thus becoming a reality, and it’s not hard to understand why: the case is set to provide some interesting features. With a volume of 7.3 liters, the GHOST aims to provide room for a mini-ITX motherboard, SFX or SFX-L power supply, 3 slots for 2.5” drives, GPU of up to 305mm and CPU cooler clearance of 63mm.The unique feature of the GHOST, though, is its modular design, which allows the use of various “top hats”, which are basically some modules of different sizes, which fit on top of the case to provide extra space. While the small “top hat” will only add 14mm to the case, which is still plenty of room for 2 SSDs, the medium top hat will allow you to house some 3.5” drives, whereas the large top hat adds a solid 56mm, which could be used to house an AIO radiator and fans, a plethora of SSD or any other accessories you might need.Assuming the Kickstarter campaign for the LOUQE GHOST is successful, the case is expected to be available by the end of the year. 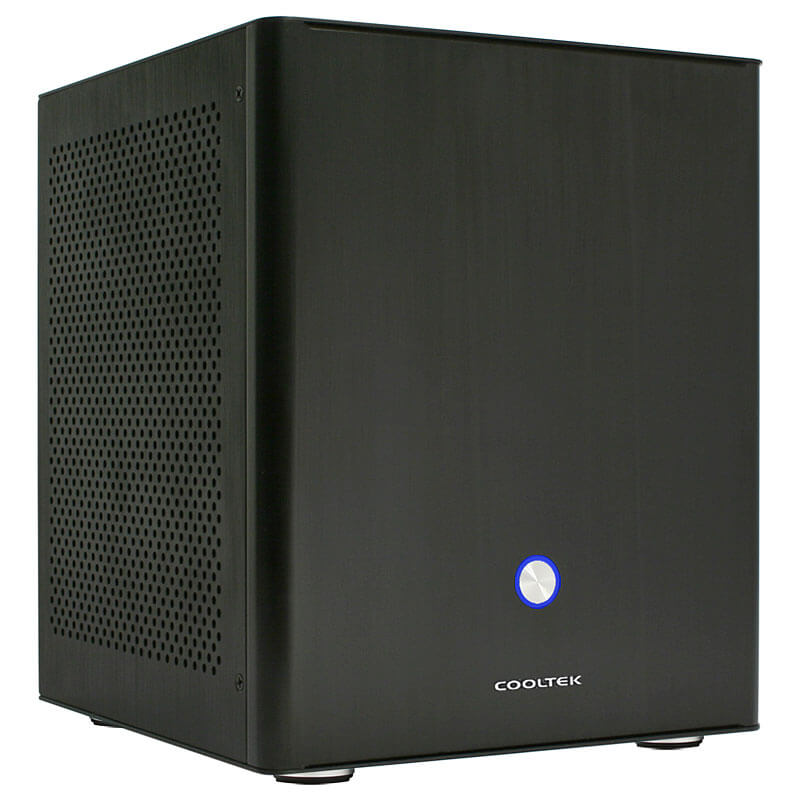 COOLTEK’s Coolcube is exactly what its name suggests: a pretty cool little cube. Even though the Coolcube does not bring any innovation or breakthrough to the table, as the previously presented models do, it does have two major advantages over the others: it is made by a renowned manufacturer and it is readily available to buy.Just because it is not innovative does not mean that the Coolcube is bad; in fact, the case is quite competitive, given its price tag of roughly $80: it can support both SFX and ATX PSUs, it comes with 2 storage bays (out of which one can also accommodate a 3.5” drive), and supports fairly large CPU coolers: up to 80mm. Although it doesn’t really stand out in terms of GPU clearance, supporting a maximum GPU length of 180mm, that is still a decent figure for the price.

Fractal Design is a brand that’s renowned for the quality and elegant designs of their cases, and the Node 202 is no exception. Coming with a sleek design that will integrate perfectly in any living room, the Fractal Design Node 202 was clearly designed with the HTPC segment in mind, but that doesn’t mean you cannot use it for a gaming build as well. After all, the case can comfortably fit a 310mm long video card, which is more than enough for almost any reference card out there, as well as a few custom implementations as well. With a total volume of 10.2 liters, the Node 202 can also host two 2.5” drives, two 120mm fan in the GPU chamber (this will reduce the available space for video cards, though, limiting you to slimmer models), and a SFX power supply.

The SilverStone SG05 might be a few years old model, but it provides exceptional value and features for its price, so it was impossible not to include in our list. Despite its small size (the case has a volume of 10.8 liters), the case can fit a CPU cooler of up to 82mm in height, has room for a 120mm fan in the front, and has 254mm worth of length reserved for the video card. Aside from its storage bays (1 x 3.5” and 1 x 2.5”), it even features room for an optical drive (a slim version, of course), which is quite a rare feature for this size. Supported power supply format is SFX, but here’s the great part: the case comes with an included 80-Plus certified 300W power supply, so that’s one less thing to worry about. 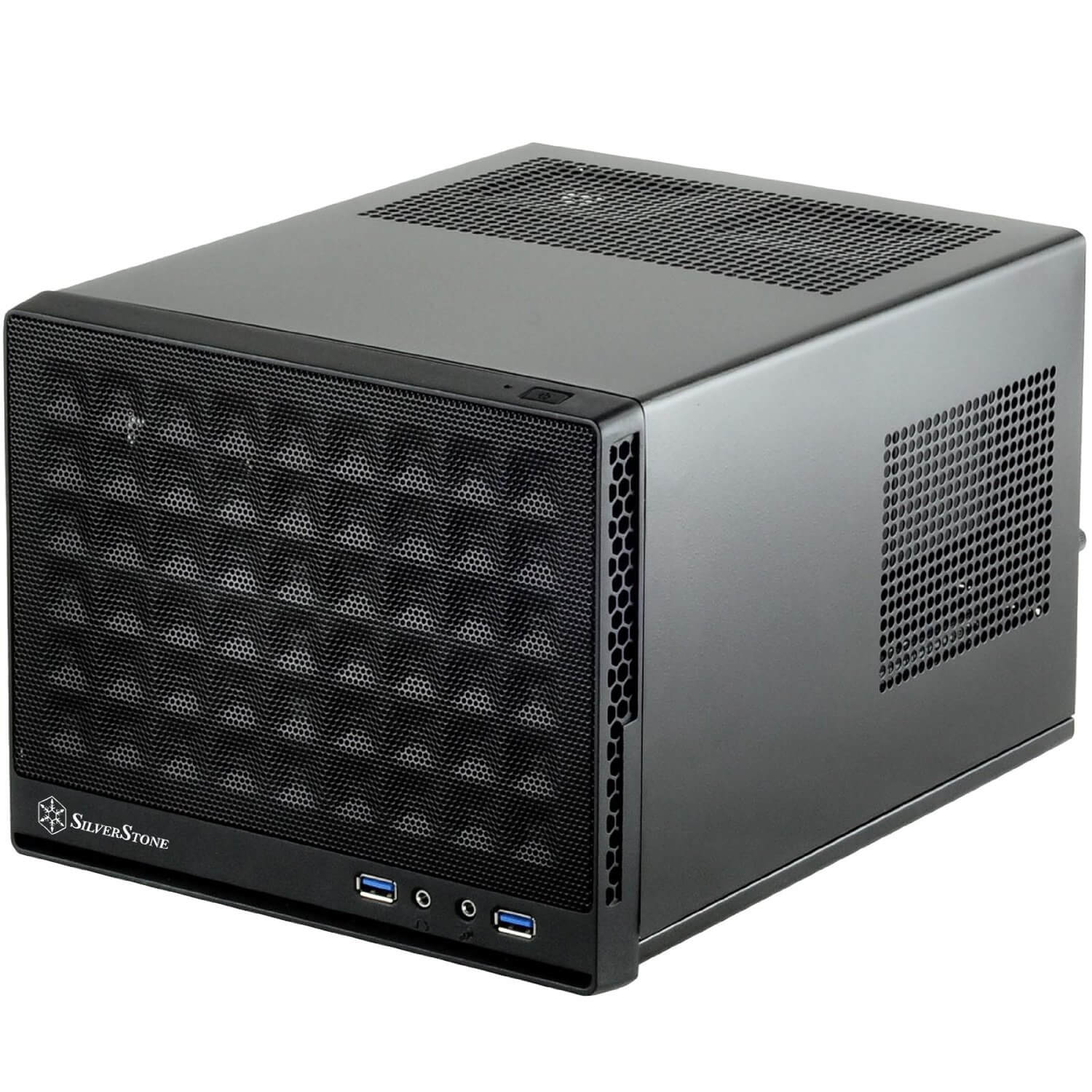 Building upon the success of the SG05 and the following models, the SilverStone’s SG13 is one of the company’s most popular options in terms of SFF cases. Taking advantage of every inch of space available (which is not that much, considering the fact that the case has a volume of 11.5 liters), the SG13 offers some neat features: ATX power supply support, 266mm maximum GPU length and 3 x 2.5” bays. While CPU cooler height is limited at 61mm, the case is optimized for 120mm/140mm AIO systems, which is always a neat feature to see in a mini-ITX case. To highlight the AIO-support, the SG13 comes in two versions: one with a solid front panel, which provides a slightly reduced airflow but improves silence, and a mesh version aimed at users that opt to go with air cooling and need a better airflow. At $40, the SilverStone SG13 is worth every cent. 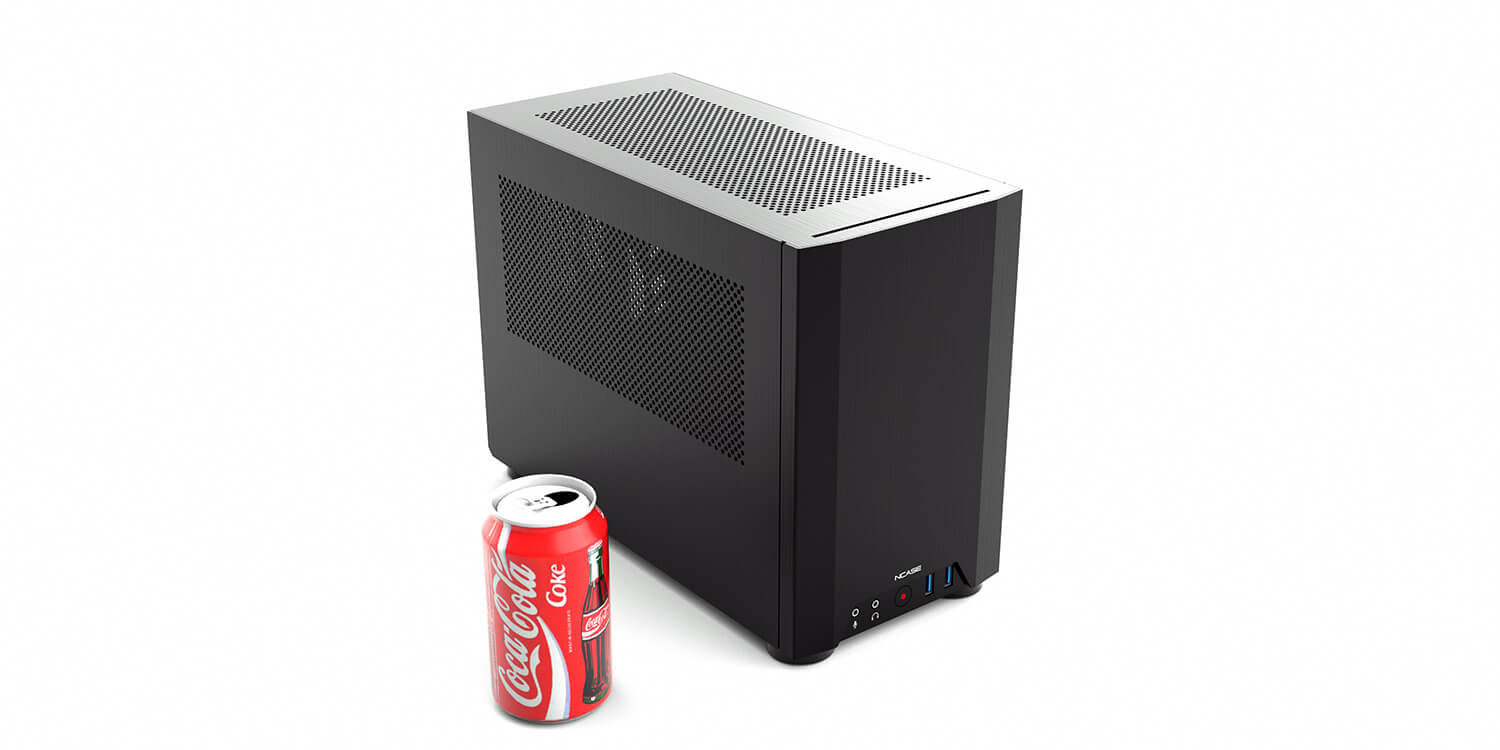 Possibly the Mini-ITX case with the biggest fanbase and enthusiast following, the NCASE M1 is a highly popular SFF PC case that is just 12.6L in volume, and can accommodate GPUs up to 12.5″ and radiators for liquid cooling up to 240mm – not bad. There have been a number of revisions since its inception and funding in 2013, with each successive version improving on the last, and now this case is highly refined and is a go-to for many SFF PC builders.