In recent years, there have been some really great GPU offerings in the mid-range market, from both AMD and NVidia. Cards like the 7870 and 660Ti come to mind, at the time they were more than enough for 60fps at 1080p, something that still is the bare minimum a mid-range card should be hitting but with a lot more headroom for some of the more power hungry graphics settings like Anti-Aliasing.

AMD and NVidia have once again really hit it out of the park with their latest mid-range offerings.

The GTX 1060 has two price tiers. For the 6GB GDDR5 version you are looking at around $250 depending on which manufacturer you choose. The 3GB GDDR5 1060 comes in at around $200, which for the budget conscience, is an interesting proposition. These two versions are otherwise exactly the same. The 1060 has 1152 CUDA Cores, a reference base clock of 1506Mhz and a boost clock of 1708Mhz and a TDP of just 120w, makes for a very impressive and efficient GPU. The refreshed version of the GTX 1060 now featured a memory clock of 9Gbps, up from 8Gbps previously.

The AMD RX 580 is the newer of the two GPUs and is a refresh of the RX 480 that was released to quite the fanfare from AMD. The RX 580, like the 1060, has a two-tiered entry system. The 8GB GDDR5 version is available from around $250 and the 4GB GDDR5 version is around $210. These prices obviously vary depending on which brand you choose. Similarly, to the 1060 both versions of the card are identical other than the cut VRAM. The RX 580 features 36 Compute Units, 144 Texture Units, a reference base frequency of 1257Mhz and it can boost to 1340Mhz when needed. The TDP is quite a bit higher than the 1060 at 185w, for comparison the 480 had a TDP of 150w so that extra clock boost has forced AMDs hand in regards to the efficiency of the GPU.

Does the VRAM difference matter?

The difference that most immediately stands out between the GTX 1060 and the RX 580 is the VRAM, the former having 2GBs less than the RX 580. Does that discrepancy adversely affect the 1060’s performance? Not particularly, especially at 1080p where VRAM is not such a big deal. In fact, we see that the faster clocks of the 1060 really help make it excel at Full HD resolutions. Does that mean that the RX 580 pulls away as we move up in resolution? Benchmarks don’t show that to be the case. The gap at 1080p in terms of framerate is about the same as it is at 1440p, around 2-3 fps faster for the 1060.

It is almost universal in games that operate in DirectX11, the 1060 pulls just ahead of the RX 580. Where the RX 580 starts to pull ahead is in games that use the newer DirectX12 and Vulkan APIs. DOOM for example is a game that absolutely thrives on the RX580 when using the Vulkan API. At 1080p on ultra-quality the GTX 1060 reaches lofty heights of 170fps, whilst the RX580 blows it out the water with 193fps. This is also a testament to how well put together the Vulkan API is. Similarly, with DX12 games you are looking at FPS increases anywhere between 5-15fps over the 1060.

For both the versions with less VRAM we see that framerates aren’t adversely affected too much, there is maybe a 2-3fps difference for both the RX 580 and 1060. Things like MSAA will be a bit too much for these cards. Higher resolutions than 1080 also see the lack of VRAM become a problem. If you have no intention of leaving 1080p, these cheaper alternatives are a great option to have.

Whilst DX11 is still a very popular API, as we go forward it is expected that DX12 and to a lesser extent Vulkan will take over. This shows that in the future the RX 580 may prove to be a late bloomer in regards to its full potential.

Horsepower isn’t the only thing to think of when it comes to choosing a graphics card. Efficiency is a really big factor nowadays, especially for those looking for a small form factor build. It is well known that NVidia has the market cornered when it comes to the power consumption of their cards, it is really impressive how they manage to keep the power draw so low on such powerful cards. AMD has been making strides in this aspect and their new RX series of cards are a huge improvement over their power hungry RX 200 and 300 series of cards but they are still quite a way away from matching NVidia.

The RX 580 under idle will pull a respectable 75 watts but under load this figure jumps to 344. For comparison, the 1060 manages 61 watts at idle and 281 watts under full load. That kind of difference can be the deciding factor in needing to purchase a more powerful PSU, costing you more money overall. It is worth noting that depending on which GPU vendor you choose; these figures can be different.

In terms of operating temperatures, it gets a little more involved than choosing either AMD or NVidia. The majority of people that buy a GPU usually get one from the likes of MSI, ASUS, Gigabyte etc. These often come with factory overclocks and coolers that a lot more efficient than their reference cousins. 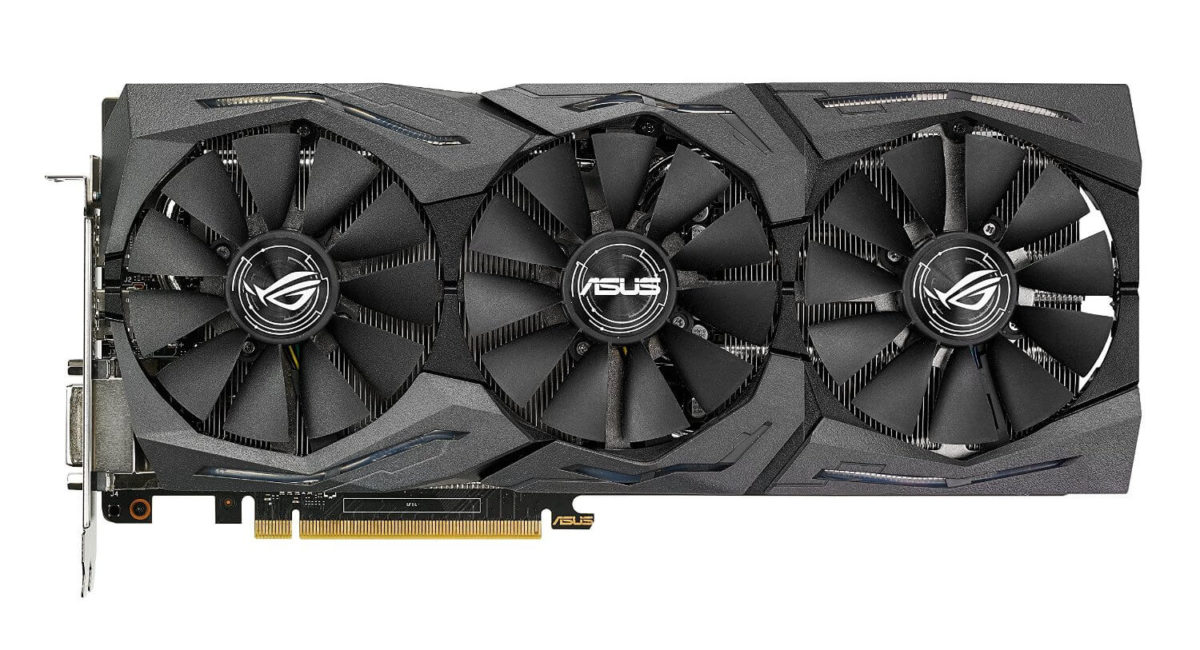 For the 1060 in terms of cooling a lot of the aftermarket coolers are equal in performance. There are also options for more ITX friendly 1060s, which for those short on space are well worth looking into, the EVGA and Zotac ones in particular are a really good choice, the former being around $250 and the latter $230. In terms of full ATX size the MSI Gaming version is a great choice, it keeps the card sufficiently cool and is quite too. It even comes with a zero RPM feature that turns off the fan when the GPU is running at a low enough temperature, a great feature for those where noise is a big factor.  The ASUS ROG Strix is also a great pick for those that want full performance first. It comes with a three-fan design and for those that care, full RGB lighting.

Which is the best AMD RX 580 aftermarket brand? 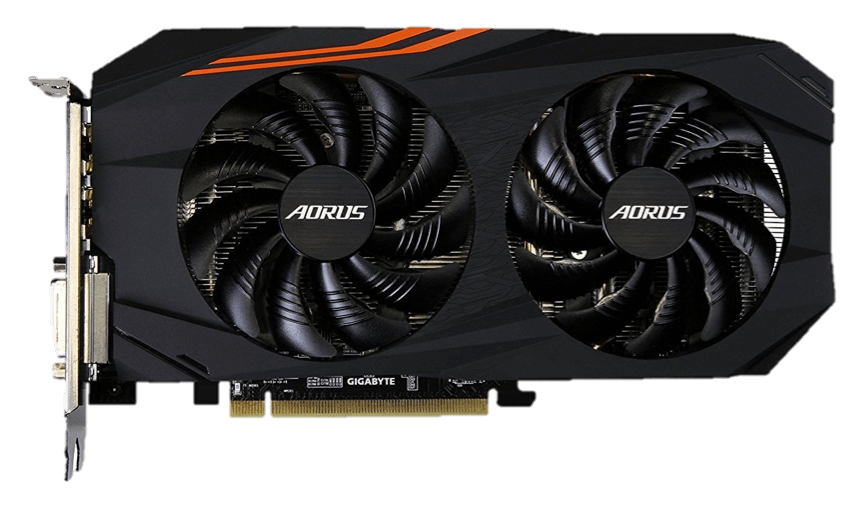 Similarly, for the RX 580 the ASUS ROG Strix is a great choice for those that want to get the most out of their card, with essentially the same heatsink that is present on the 1060 version. The Gigabyte AORUS is a great choice as well, with great cooling at a length that is in between an ITX and full length GPU. Sadly, that is about as small as the RX 580s get, which may rule it out for those that use Mini-ITX or other SFF cases.

Do you value efficiency more than anything else? Then the 1060 is really a no brainer, the RX 580 is a bit lacking in that aspect. When it comes to raw performance, the 1060 may initially sound better on paper but as more games move from the outdated DX11 to the new DX12 API the RX 580 really pulls ahead. The resolution in which you game at is a big factor as well, the general rule of thumb is that the higher you go, the more VRAM is needed. The 8GB of the RX 580 is sure to future proof somewhat. The 6GB of the 1060 seems to be a bit on the low side considering where we are going with the way HBM2 will be really cranking the VRAM totals up due to the memory stacking approach.

This brings up another factor that needs to be taken into account, the fact that AMD’s Vega cards appear to be right around the corner. Now, it is unknown as to whether the Vega series will tailor to this market segment but if you can wait, Vega may prove to be a good choice. If it turns out to be geared fully towards the high end, it should at least go someway to pushing down the prices of the cards in the mid range.

I think that both the GTX 1060 and the RX 580 are great options for the mid-range PC builder. Especially with the lower VRAM variants giving people that don’t need the extra VRAM a way to save money without hugely compromising on performance. Considering that the prices for both of these cards are around the same ballpark it really depends on your use case for the GPU itself.