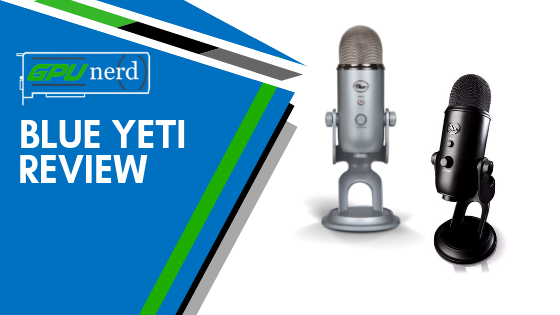 Blue Microphones’ Yeti is a much-lauded USB microphone that is often referred to as the Blue Yeti. It ranks atop many microphones “best of” lists in its price range and is given high marks in terms of its sound quality. Does it live up to the hype? Find out below.

USB mics are meant to be simple to use, which generally means plug and play. A preamp inputs your audio and converts the signal from an analog to a digital signal for the computer to understand. The signal is transferred via the USB cable, and the software takes the signal and records or transmits it, making modifications as selected through its interface. Whether for a podcast, a YouTube video or a music recording, a USB microphone is meant to be an upgrade from the built-in mic or low-quality one that comes with a computer. It should be a low hassle way to get improved audio into productions.

The Blue Yeti has been well reviewed and is a favorite of many people who record or transmit audio. It sits at the top of many lists for a number of reasons:

In many cases, adding a con to a high-quality, great value item does not come easy. Reviews might list a con so that the article is not too glowing. For the Blue Yeti and the purposes of this writing, the con listed is a minor negative. 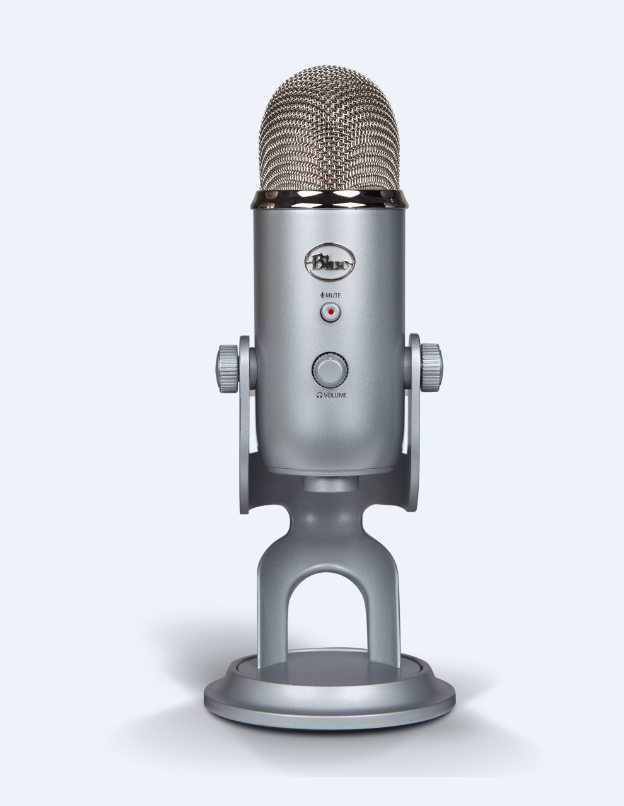 The Blue Yeti arrived. The packaging was not a letdown; it had a number of cool yetis adorning the exterior. Even more impressive, though, was that the box was of high quality and able to ship the mic and keep it quite safe. Diving into the contents, the microphone itself was held snugly in the foam packing. When it was freed, there was no broken foam with tiny bits of the white material to invade the electronics. This is often a frustrating part of getting a new piece of equipment, but in this case, the quality packaging kept things spotless. The Blue Yeti is doing well so far.

The included components were, quite simply, the microphone, a USB cable, and the manual. The Blue Yeti came fully assembled and ready to work right out of the box. The mic itself is large, almost a foot tall, and quite solid, weighing about 3.5 pounds. It has a tabletop base as its support. The base has non-slip rubber pads to keep the mic in place and prevent vibration from interfering with the recording.

The Setup of Blue Yeti

Timing the setup on the computer was interesting; it took less than one minute. The operating system was Windows 10. Plugging in the USB cable, the system automatically installed and had the mic listed as the proper device. Not one “button” had to be pressed on the computer. Voilà—truly plug and play. It has had the easiest setup of any device on the computer to date.

As you look at the mic, the front is designated by the Blue logo. It has a button beneath it that has a solid red light. This is the mute button. When pressed, the microphone stops sending audio data to the computer. If muted, the red light flashes. When pressed again, the mic is turned back on and the solid red light is back.

Beneath this button is a volume knob for the headset. There is a 3.5mm headphone jack located on the bottom of the microphone. This allows for any compatible set of earphones to be used to monitor the audio whether from the mic or from the computer speaker output.

The USB connection is also beneath the Blue Yeti. It is a USB Mini-b (5-pin) connection on the mic. This type of cable is not as common as the Micro-USB B, which is frequently used on many newer products. The cable that comes with the Blue Yeti is solid and not flimsy. Rounding out the bottom of the microphone is a standard threaded attachment point to connect to a stand or shock mount.

The rear of the microphone has a gain knob to adjust the Yeti audio going to the computer. This allows for quick adjustment of the signal prior to entering the recording or transmission software.

Below the gain control is a knob that selects the pattern mode of the Blue Yeti. Blue Microphones touts their tri-capsule mic technology that allows for the selection of four different patterns from one microphone. These different modes make different audio sampling situations viable.

This feature of the Yeti makes capturing sound from different angles feasible. Select a mode with the knob on the rear of the mic and you can record different setups. The Blue Yeti is a side-address microphone. This type of mic does not use the end to bring in the audio. Instead, the source needs to be perpendicular to the Yeti to capture a proper signal.

The stereo pattern mode brings in audio in a left and right channel. This is good for recording multi-sourced audio; for example, a group of singers or different instruments. This can also be used to record regular vocals when you need a stereo sample. It provides a different quality to the sound that may be more aesthetically pleasing for the producer.

Cardioid is the most used method of recording. It is meant for a single source directly in front of the mic. A podcast, voice-over or vocals will be captured with a rich sound, and the rear and sides of the microphone will not be recorded. In most cases, this is the recording method of choice.

With this pattern selected, the Yeti records from all directions. This is useful for a conference call, a group of musicians, a conversation with a group or any other situation where there are multiple sources of audio.

Bidirectional records from the front and rear of the mic while suppressing sounds from the sides. This method allows for a conversation to be recorded without multiple microphones. Further, musical instruments in the front and back can be used. This method gives both a natural and nuanced sound.

In tandem with the different patterns that the Blue Yeti has available, in the “dead” area of the microphone it has noise cancellation. So, for example, if one is recording in cardioid mode from the front, the sides and rear of the mic help dampen any stray sound that may occur and protect the main audio source.

The headset jack allows for zero-latency audio monitoring. This feature is very important and makes immediate adjustment easy in case there is an issue. With the jack directly on the mic, one hears what is being sent to the computer and associated software as opposed to audio that is already processed and is most likely delayed. This is a must-have feature. Real-time monitoring can make the difference between a great take and a do-over.

The Yeti features 16-bit, 48kHz recording. Although this is not the absolute best quality recording one can achieve with high-end equipment, this sample rate is more than powerful enough to give a rich and nuanced sound.

Having a mute button directly on the mic, as well as the headphone volume control, provides ease of use for the Yeti. The gain control for the audio signal sent to the computer allows for quick and easy adjustments that are especially useful when one looks to work quickly or change things on the fly. Dialing a knob directly on the mic is far superior to adjusting the signal on unwieldy computer software. If the audio is going from a soft musical piece to a thunderous booming, having an easily adjustable knob can be a lifesaver.

The Blue Yeti’s solid metal base, weighing over 2 pounds, keeps the mic in one place. Further, the skid-proof rubber foot pads prevent shock and keep the microphone from sliding.

The Yeti was the first microphone to receive THX certification. This is a sound certification that is given for quality audio that is honest to its origin and does not deviate into a tinny or otherwise undesirable audio signal. The certification is based on different tests. These include signal-to-noise variation, frequency replication, and other factors. This is a distinction that helped put the Blue Yeti on the map, and the quality continues to the Blue mics that are manufactured today.

Blue Microphones lists the Yeti as plug-and-play on both a Mac and PC. It is compatible with Windows XP (Home and Professional), Windows Vista, Windows 7, Windows 8 (including 8.1), Windows 10, and Mac OS X (10.4.11 or higher). It requires a minimum of 64 MB of RAM. On the computer tested, it was flawless in setup and function.

The question often comes up: what are the differences between the Yeti and the Yeti Pro? The decision between the two is pretty straightforward. The Yeti Pro offers both USB as well as XLR connections and has a higher sampling rate of 192 kHz at 24-bit. The Yeti Pro is priced about $100 more than the Yeti.

Blue Microphones’ Yeti is priced over $100. This is slightly higher than some beginner USB microphones, but it is much less than professional models. The Blue Yeti can be found on Amazon and other online retailers.

As mentioned previously, Blue Microphones’ tri-capsule technology allows one to change the pattern modes. Four different variations are available, thus making the Yeti a great multi-use tool. Whether there is a solo voice-over artist, a group discussion, or a string quartet, this microphone has you covered.

Wow! This is the best quality of the Yeti. The sound is rich and natural, capturing the timbre and nuances of the original source material. In some ways, it exceeded a recent recording at a professional studio. Without a doubt, the Blue Yeti is a cost-effective, quality piece of hardware that can provide exceptional audio quality. When using the Yeti on a table and not hauling it from location to location, the mic is perfection. But, the size and weight can be a burden if it’s being used in different locations and setups. It is large and not easily manageable, and might present problems when connecting to various shock mounts or other devices. This being said, if preparations are made in advance and the setup is checked to make sure everything works well together, this is a minor point.

If looking for a beginner USB microphone that is an upgrade to your existing mic that came with your computer, look no further than Blue Microphones’ Yeti. It provides exceptional sound quality for a modest price. It comes ready to record right out of the box and features controls that are easy to understand and adjust. The plug-and-play aspect works on both a Mac and PC and gets the recording ready to go in minutes. Whether for podcasts, vlogging, YouTube videos or home music recording, this microphone gives a fantastic quality for the price.