Home / News / X399 and Threadripper: The Beast Hits The Streets

X399 and Threadripper: The Beast Hits The Streets

Reviews of AMD’s new X399 platform are ubiquitous, the results, predictable. X399 and Threadripper destroy competing Intel products in all productivity tasks. The glue is powerful.

At the heart of Threadripper’s performance is the all-new X399 (Socket TR4) chipset. The most striking difference physically between this and AMD’s other new releases is the move to an LGA (Land Grid Array) configuration, like all of Intel’s current products. For those new to PCs and building, LGA basically means that the pins are embedded in the socket, not on the CPU. The bottom of the CPU is covered with small square contacts called lands. For reference, see the bottom of Threadripper below.

4,094 pins later, X399 is ready for action. The platform boasts extreme capabilities and features including 128 GB DDR4 quad-channel memory support and 66 PCIe 3 lanes, 48 of which can be dedicated to graphics and 8 PCIe 2 lanes.

From AMD’s footnotes on the new chipset: “There are 64 lanes of PCI Express® Gen 3 connectivity in the AMD Ryzen™ Threadripper™ CPU. 4x lanes are reserved for communication with the AMD X399 chipset. Up to seven PCIe® devices may be connected to the system (not to exceed 60 lanes); additional concurrent devices may be supported with a PCIe® clkgen on the port or device. An additional 2x PCI Express® Gen3 lanes within the AMD X399 chipset may be used by the motherboard vendor to provide an additional 4x SATA or 2x SATA Express connections.”

And, the “8x PCIe® Gen2 lanes in the AMD X399 chipset may be utilized by the motherboard vendor to enable expansion devices such as Ethernet, WLAN, Bluetooth, or other companion controllers.”

Crossfire and SLI support is standard (for quad configurations X16 / X8 / X16 / X8) and storage options are plentiful as the other 18 PCI-3 lanes can bus SSDs and the platform includes up to 12 SATA ports. X399 doesn’t support NVMe RAID, but standard HDD protocols are supported. Though board partners could shoehorn that many SATA connectors on the boards if they wished, they will most likely use extra SATA capacity for m.2 connectors.

And of course OC support is included as Threadripper, like all Ryzen products is unlocked. People are already getting stable 4.1GHz systems with closed-loop liquid cooling.

Also worth discussing are the various memory modes accessible to Threadripper. They are UMA, or the Creator’s mode which allows unlimited access to cache from all cores or NUMA. Maybe gaming mode? It’s unclear… At any rate, UMA stands for Uniform Memory Access and as previously stated allows all of Threadripper’s cores to access all of the CPU cache. NUMA, or Non Uniform Memory Access, effectively splits the cache allowing each bank of 8 cores access to half. This has the effect of speeding up performance in applications like games that benefit from faster access, sometime by 10% or more.

The final result is that Threadripper is a bit slower than Intel for gaming, from almost even to maybe 10% slower depending on title, but both platforms are putting out massive frame rates, easily exceeding 144 frames. For this platform’s intended purpose and cost, gaming should not be at the forefront of a buying decision. More compelling is AMD’s advantage in productivity tasks and cost vs. performance.

With a strong release and X399 boards OOS or backordered online, X399 and Threadripper seem poised to grab more market share from Intel. And speaking of boards, the Gigabyte X399 AORUS Gaming 7 featured for this article is a very nice board, maybe the best for OC. But I’ve heard good things about ASRock’s X399 Taichi board and it’s subtle aesthetics and feature set make it stand out for me. 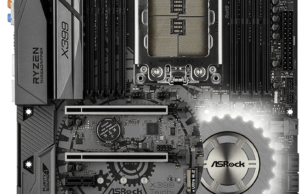 The ASRock X399 Taichi includes an 802.11 AC wifi module bundled “free” as well as Bluetooth 4.2 / 3.0 + High speed class II capabilities. That’s not special in this group, but ASRock boards also have a reputation for running the lowest system temps of any of the new boards. And it has the goods where it counts, featuring the same VRM as their higher-end Fatal1ty board and steel-reinforced PCIe slots means this board should reliably support even heavy cards and handle OC duties for years. The icing on the cake is the Taichi’s aesthetics; nicely neutral to go well with any lighting choice. Of course no board is an island; it needs a good CPU to run things. And though the 1920X is a nice CPU, really there’s no need to accept any substitutes. ASRock X399 Taichi and AMD Ryzen Threadripper 1950X. Perfect for browsing the web, watching movies, taking over the world, whatever.