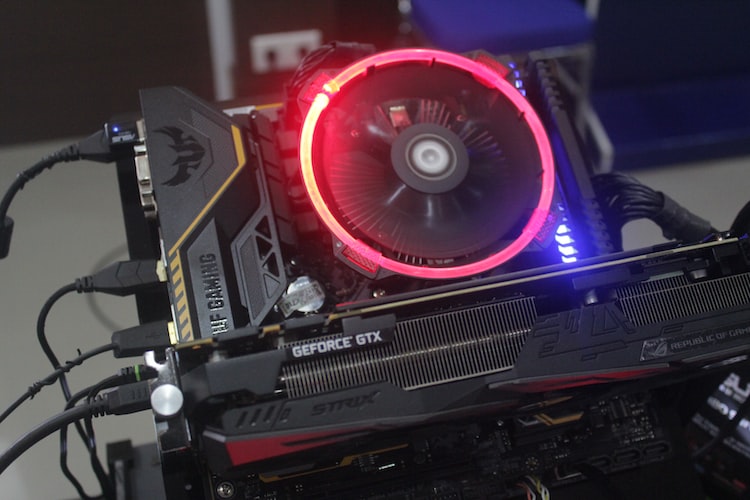 That fact that you’re able to, on your own time, effort, and money, improve the quality and value of your gaming tower is probably one of the main reasons why PC gaming is dominating the gaming sphere.

Constructing an Xbox One or Playstation 4 in your bedroom isn’t really something that happens. And it probably won’t be as good as the real thing.

By comparison, anyone is fully capable of constructing their own computer. The parts are readily available, and it’s entirely probable that the end result will be twice as good as any mainstream console for half the price.

When it comes to augmenting your tower, one of the most common parts that gets upgraded is the graphics card.

Quick Navigation
What is the GeForce GTX 980 Ti?
How Exactly Does It Work?
What Makes the GTX 980 Ti Special?
Let’s Talk More About Pricing
Public Perception of the 980 Ti
How It Compares to Others
What We Think of the 980 Ti
Deals for a Good 980 Ti

Well, to start with, I need to make clear the fact that it’s not a graphics card. It’s a GPU, or a Graphics Processing Unit, which you use to supplement your GPU.

It’s a chip with the express purpose to render and display the images you see. It’s what makes everything look so nice in the most powerful of machines.

How Exactly Does It Work?

It works like any other GPU does: you plug it into your graphics cards and let it do its work.

That’s simplifying it though. The way a GPU functions is by translating the vast amount data entering the graphics card into images that are seen on the monitor. Its sole purpose is to run these calculations, making them the primary component a graphics card is built around.

As the GPU processes, renders, and creates the images it will show on-screen, it stores those completed images in the RAM. Once these images are ready to be shown on screen, the RAM sends them to the RAMDAC. The RAMDAC is what is responsible for turning that data into an analogue signal that monitors are capable of projecting.

It’s A-B-Cs. The crux of your computer handling all of those high-spec graphics is by using high-end GPUs to handle the workload. The GTX 980 Ti just so happens to be one of those GPUs.

What Makes the GTX 980 Ti Special?

While other companies have made their own versions of this GPU, the original is derived from Maxwell. Maxwell is, of course, the microarchitecture developed by Nvidia, one of the preeminent companies behind many high-end computer components.

With game quality continually climbing to new heights, year after year, the struggle to create new technology - both software and hardware - that is capable of sufficiently delivering in ever increases stages continue to plow forward. The best, most recent, step in developing the software that can handle the high-processing power needed for modern games is the Directx 12.

Directx 12 is what enables your computers to talk to their hardware components. It’s all about communication, and the 980 Ti is what’s capable of interpreting that information and turning it into reality.

Directx 12 is what allows the GPU to create what it does: it creates options, complexity, and challenge, and turns it into a decipherable language with increased optimization.

But what about the GTX 980 Ti itself? What does it do that’s so special?

Besides being built to handle that onslaught of complex information, plenty. It’s designed to accommodate the new features that Directx 12 offered, including:

When Directx 12 came out, these were brand new features. Now, the software is three years old, and the competition has caught up, but at the time it was released the 980 Ti was in a league of its own.

4K gaming, Virtual Reality, these were the hottest topics when the 980 Ti made its debut. Because this setting demanded an amount of processing power that just wasn’t, and still isn’t, expected from the average gaming computer, GPU power needed to step it up.

The 980 Ti pulled its weight in that department.

The 980 Ti was designed to accommodate the newest era of gaming. Incredible graphics, complex physics, unprecedented mechanics, all of which fell in the 980 Ti wheelhouse. You could turn every single setting on your most demanding game, like GTA V, The Witcher 3, or even Minecraft, to the maximum on every page and the 980 Ti was there to support it.

I’m not going to talk smack about what the 980 Ti was when it debuted, it was top-of-the-line technology. The question is: is it now?

It’s been three years since the 980 Ti entered the scene. The thing about technology is that it marches ever onward toward Bethlehem. It’s unstoppable, ever-moving, and indifferent. Technology, for the most part, is not a victim of planned obsolescence, it’s a stepping stone to progress. Technology gets better and more advanced every day.

Is the 980 Ti still as viable today as it was three years ago?

That’s enough dramatic premise. The answer is: yes, it defies expectations and still carves out a niche for itself on the market.

Of course, the 980 Ti isn’t the top dog on the market, it’s three years old. That’s three years for Nvidia or competing companies to one-up it with new GPUs. However, new products have no effect on the objective quality the 980 Ti has and always has had.

If anything, three years can make the 980 Ti a little more appealing than modern options. When the 980 Ti dropped it was worth $$$. That’s a high price, but that’s what you pay for the best. Nowadays, you can get the exact same excellent GPU at $$, and even less if you shop around on Ebay or Amazon.

What’s so special about it is that, despite three years passing since it launched, it’s still an incredibly solid GPU. It remains relevant in modern markets.

Here’s the scoop: it’s not likely that you’re going to be able to find a reputable company still selling fresh, off-the-line 980 Ti’s. Most creators have moved on by now to newer generations of GPU. If you’re interested in getting a quality 980 Ti, then you’re going to have to do a little research - or let me do it at least - and be willing to take a risk.

Three years have saturated the market with an older model GPU, and that, if any, is something to take advantage of.

Let’s start with Newegg. A reliable retailer of electronic goods, Newegg’s listing of available 980 Ti have them from $$$ to $$. Small selection, but a 980 Ti for $$ isn’t too bad of a deal. But we can do better.

Scouring the lists of online retailers, specifically ones that put their products up for auction from person-to-person, comes up with Ebay. From the front page alone, there are listings at $, $, $$, and everything in between.

The passing of time and the march of new GPUs makes people put their old ones up for sale. They’re not worse, they’re not broken, they’re just slightly outmatched by new competition and their owners have some dollars burning a hole in their pocket.

The point is, the 980 Ti, even if it comes used, is still on par with many of the more modern GPUs you can find on the market, including newer generations GTX 900 line.

Public Perception of the 980 Ti

Most of this is supported directly by recent and overwhelming consensus from a multitude of people who have personal experience using a 980 Ti. Often regarded as a “power hungry version of the 1070”, the biggest downfall that pits the 980 behind newer tech is that it consumes more energy.

While that might be a slight drain on your electric bill, it won’t be enough to discount the overall value the 980 brings to the table. All the research comes back the same: the 980 Ti, even if it’s less energy efficient and slightly less powerful, pulls no less weight than any other GPU of a similar class.

There are simply no games that are capable of stressing your gaming rig to the extent that the 980 Ti wouldn’t be able to compensate for.

How It Compares to Others

Judging how it compares to other GPUs is a little bit unfair at this point. The GTX 1080 Ti is extremely similar, but more consumes less energy and packs a little bit more power. According to Benchmark, the 1080 outclasses the 980 in essentially all categories, whether it comes to speed, rendering, FPS, and whatever categories you might compare the two.

The same story will follow in every brand new, top-of-the-line GPU. That’s cause they’re three years newer. However new they might be, however, doesn’t change the fact that most modern games won’t push either of the GPUs to their utmost limits without extreme intervention.

In my humble opinion, I’m impressed that the 980 Ti remains as relevant today as it does. There are medical techniques invented five years ago that are obsolete. Technology has been moving forward at such an incredible rate that a computer five years old is severely and hopelessly outclassed by something created today.

For a technological world that constantly makes better and better things, the 980 Ti is holding ground. Chances are it’s going to be able to hold that ground for a few years more before it stops being relevant. A $$ purchase, in light of GPUs twice that price, that can maintain quality relevance for that long?

I think, if you’re able to get this for a good price, it’s an opportunity you should take.

Frankly, there’s not going to be much in the way of a better deal than taking a look at the Ebay or Amazon listings yourself. There are plenty of sellers looking to get rid of their 980 Ti’s, and that’s something to take advantage of.