Home / Knowledge Base / Why you’re Paying Too Much for RAM

Why you’re Paying Too Much for RAM

RAM is an essential part of any PC build as selecting the right one ensures your system doesn’t slow down under load. However, in a lot of cases, buyers typically end up paying more than they need to. The extra spend provides only minuscule improvements in performance if any at all.

There are two main components to consider when buying RAM: the size, which nowadays is typically 4GB or 8GB per stick, and the clock speed. In this article, we will be examining the latter aspect and what you need to know to get the most bang for your buck.

What is clock speed?

DDR3 and DDR4 two main types of RAM you’ll come across, and the DDR4 is the up-to-date version that most modern systems are currently using. The clock speed is found alongside the DDR4 part of the name. So for example, it might say DDR4-2133 or -2666, which represents the clock speeds in MHz.

The RAM performance depends not only on the clock speed but also the access latency. It tends to be the rate-determining factor that bottlenecks the speed of the RAM. However, in recent years thanks to technological advancements the speed reduction due to access latency is not as significant.

When you buy DDR4-2133/2400 it’s a plug-and-play type setup. Simply insert into your motherboard and you’re good to go. However, when you wish to do the same with DDR4-2666 or faster it’s not as simple.

You’ll need to go to BIOS settings and manually alter a few numbers in the XMP profile. This allows the motherboard to run at those higher speeds, which is essentially overclocking the system. For some of you this might be a piece of cake and not a nuisance at all. However, for a lot of consumers might not be bothered to go anywhere near the BIOS settings, or even worse they might not know that to achieve advertised speeds modifications must be made.

Why faster RAM might not be a wise investment

Unless you’re doing video editing, programming, or streaming faster RAM might be wasted on you. Even for intense tasks like gaming on the latest AAA titles the performance increase from faster RAM isn’t worth it. You might get a few frames per second increase, or there might be no difference at all. This depends on the specific gaming rig that you have and the game that you’re playing.

You might be able to get away with buying DDR4-2133 RAM for all your needs. And if you’re one of those PC builders that’s looking to futureproof the system, then don’t worry. That kind of RAM performance will be more than adequate for years to come.

The price difference between slower and faster RAM could be better spent on other components of the system – such as upgrading the CPU or buying a new peripheral.

How to make the most of your RAM

There are ways that you can increase the efficiency with which your RAM is used. The software you’re running and the way your PC is set up are all contributing factors to RAM usage, but there are some general methods for boosting RAM.

One of them is to make use of RAM boosting software such as ReadyBoost. Such software scans your PC for inefficiencies in RAM usage and reorganizes it for the best results. Another method that’s also easy to implement is by using the Task Manager. Open it up and pay attention to the memory column. Here take a look at the programs that are using up the RAM. If you spot any programs that don’t really need to be running and are usually always on in the background then consider disabling them.

Do I need to upgrade my RAM?

When considering an upgrade it’s important to take a look at the RAM you have now and what the performance boost will be by investing in new RAM. If you bought RAM in the last few years then an upgrade is probably not required.

Let’s say that you have DDR3-1066 RAM, this by today’s standard is quite dated. Combining that with a Core i7 processor is not a great idea. Upgrading to DDR4 RAM in this scenario would be worth the investment.

Also, consider that investing in a GPU upgrade is more cost-effective than a RAM upgrade if you cannot afford to do both.

The memory products from Kingston HyperX Fury come in a variety of sizes which include 4GB to 64GB. They are fairly priced DDR4 RAM solutions that compete with any other similar product in the marketplace.

Each unit comes factory tested and is compatible with the majority of the popular motherboard brands. However, to err on the side of caution do make sure compatibility isn’t going to be an issue before purchase.

It has a well-crafted low-profile heat spreader with the signature Fury design. The neutral black color of the products means that it goes well with any rig from a visual consideration. Furthermore, the power consumption is low at 1.2V, which results in less heat.

Overall, this is a great product regardless of what PC build you’re going for. Ideally, you should buy two 8GB RAM sticks to end up with 16GB of memory. This gives you plenty of memory for virtually any task you might be doing, and provide the power for any game now and in the near future. However, if you want to give yourself an uncompromising RAM solution then the Kingston HyperX Fury Black 32GB Kit is a great choice. 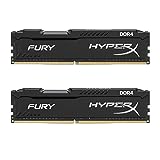 Now that you have a better idea of what role clock speed plays when it comes to RAM you can make better buying decisions whether you’re building a new system or upgrading an old one. Remember that buying clock speeds of 2133 MHz is plenty for most users, especially PC gamers. Getting anything faster will not be that cost-effective, and you might not even receive a performance increase at all if the BIOS settings remain unaltered.