With the GTX 1070 Ti just beginning to hit consumers in 2017, this guide will help any of those looking to choose between aftermarket GTX 1070 Ti brands and models. Any questions you may have about this new card or want to ask buying advice on buying a new graphics card, drop us a message in the comments!

For those of you who are always looking to get the very most out of your CPU, GPU and memory, we needed to choose which 1070 Ti was the best for overclocking. This category was taken by ASUS’s Geforce GTX 1070 Ti 8GB ROG STRIX advanced edition card. It comes stock with a 1759 mhz Boost clock, which is a moderate bump up from the stock clock speeds. It’s cooled with premium quality aerospace-grade super alloy power II, DirectCU II and new ASUS FanConnect II technologies. One of the reasons this gets the award for best overclocking is the Impressive cooling features and moderate boost clock speed, giving you a lot of overhead for pushing this GPU. It also comes with the aura sync RGB lighting on the shroud giving it a distinctive and customizable look. Loaded with the GPU Tweak II software makes monitoring performance and streaming easier than ever, featuring Game Booster technology. If you’re an overclocker and want a solid GPU that has cooling to match top-end speeds, this is definitely a winner.

Getting the best bang for your buck is always a good thing, especially when it comes to your new gaming rig! The EVGA 1070 Ti SC Gaming shines in this regard, not sacrificing features or power for a great deal. Costing (at the time of this writing) $469.99 on Amazon, you get quite a bit of graphics card for your money with this EVGA GPU. The card itself is a beautiful matte black, with the fans matching the shroud better than most other cards, featuring EVGA “ACX 3.0” Cooling. The GPU is clocked at a boosted 1683Mhz from the factory, and it pack 8gb GDDR5 memory. They equip it with EVGA Precision XOC and EVGA OC Scanner X, allowing you to find and set your optimal overclock speed with a single click. If you need a great value, without losing any power, this 1070 Ti from EVGA simply cannot be beat.

For raw performance, we needed to give credit to Gigabyte for the 1070 Ti series. The best performance award went specifically to the Gigabyte 1070 Ti Gaming Edition, which is a real gem of a card. With a base of 1607Mhz, and a boost speed of 1721Mhz, the Gigabyte card really makes the most of what the 1070 Ti card has to offer performance-minded gamers. The cooling fans are equipped with Gigabyte’s Windforce 3X blade fan design for amazing cooling, and the black shroud has RGB lighting effects. With a modest price point of $489.99, it’s a great deal too. There’s really nothing not to like about this powerhouse of a card, and the performance speaks for itself, especially in OC mode, which is an absolute dream. 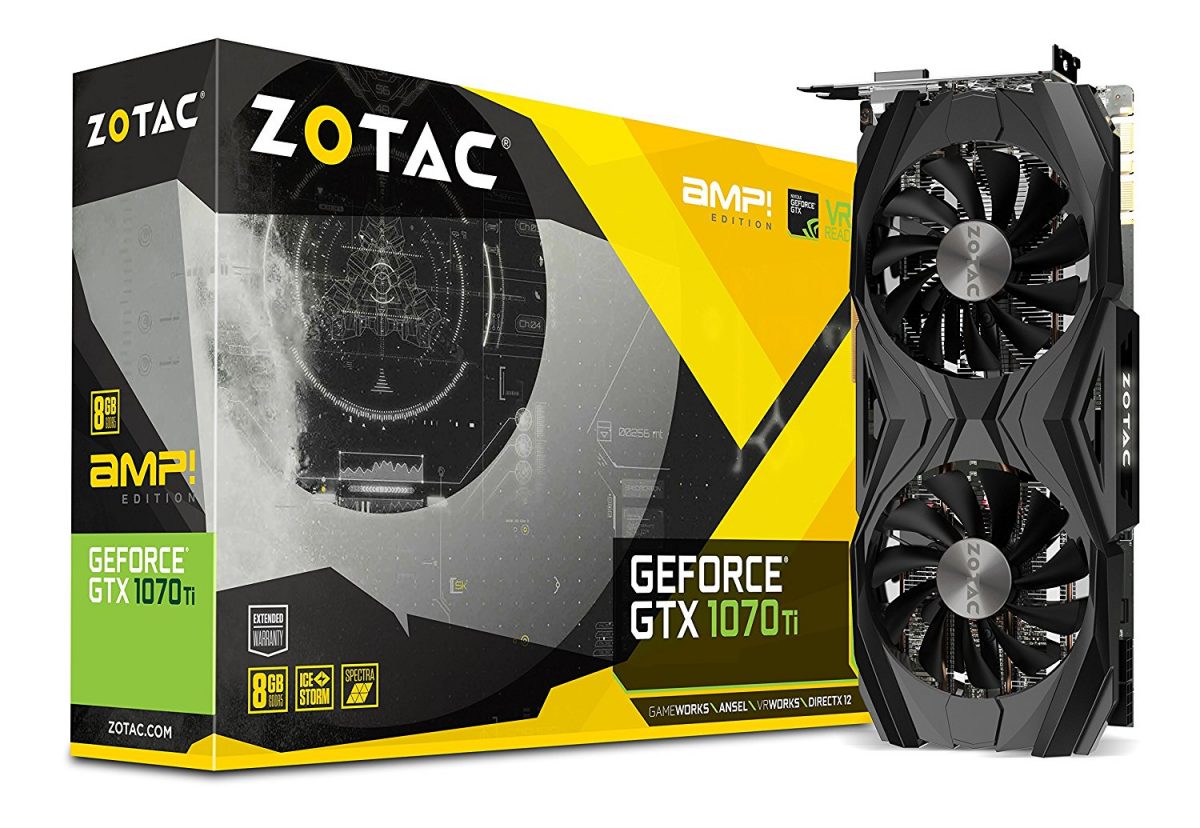 When you’re looking for a system that can perform in VR or 4K, but won’t fill your office or living room with noise pollution, you should pay extra attention to the quietest GTX 1070 Ti category. For the sound sensitive out there, we are recommending the Zotac GTX 1070 TI AMP! edition GPU. Don’t be fooled because it can operate quietly, either, this dual-fan video card packs a full 8Gb of 256-bit memory, and a boosted clock speed of 1683! Zotac keeps the card cool with a combination of high quality EKO fans, and theirIceStorm technology. IceStorm utilizes direct copper contact to draw heat directly away from the core, and thermal heat pads on all heat generating components to maximize cooling efficiency. Paired with their proprietary EKO dual-bladed fans, this card stays very cool with minimal fan noise. Also featuring one-click overclocking, this tiny little card can still pack a big punch, without you needing to hear about it.

For anyone making their living (or even hobbyists) mining cryptocurrency of one form or another (bitcoin, being the most current and easy example), raw performance, price, and longevity need to be considered. For this category, we needed to give credit to Gigabyte for the 1070 Ti Gaming edition card. The best performance award also went to the Gigabyte 1070 Ti Gaming Edition, which makes it a double win for Gigabyte (and for consumers!). With a base of 1607Mhz, and a boost speed of 1721Mhz, the Gigabyte card really maximizes what the 1070 Ti card can offer performance-minded miners. The cooling fans are equipped with Gigabyte’s Windforce 3X blade fan design for amazing cooling, which is of utmost importance if you plan on running your GPU maxed 24/7! With a modest price point of $489.99, it’s a great deal too. With a super stable OC mode available, for that extra bit of mining power, you will be glad to have a card featuring 3 cooling fans, and a high-quality brand name like Gigabyte!