RGB has slowly but surely made its way onto every gaming branded PC component. From Motherboards to cases, RGB is available on just about every gaming product released nowadays. To some RGB is somewhat of a waste of time and money, but to other RGB is a great bit of fun that can really help make your build stand out and look great.

That isn’t to say that lighting wasn’t popular for PCs beforehand, it just existed in a different form.

First, it all started with cold cathode lighting tubes, tiny glass tubes that had a single strip that would light up in just one colour, you could even get UV cold cathodes. Once a staple for those that had a custom watercooling loop and used UV reactive tubes. It would certainly make your PC look like you’d stumbled into a nightclub.

Cold cathodes fell out of fashion, they were quite big and unwieldy, and relatively power hungry compared to their successor.

The simple humble LED strip then made its way onto the lighting scene. Easy to hide strips of light that could easily be hidden out of sight, with a much more impressive lighting effect.

These would only support one colour though, this meant you had to really plan the theme of your build carefully, because changing it wasn’t really easy. These weren’t really addressable either like current RGB technology. They were either on or off. If you wanted to be really fancy you could buy adaptors that could make the lights flash to music.

Alongside cathodes and LED strips, LED Fans have long since been a big deal. They were integral to really making a build look that extra bit special. A lot of the cheaper case manufacturers used to use the inclusion of poor fans with LEDs to make their cases stand out against better ones. Such is the allure of these pretty LEDs, they are hard to resist for many.

Now that you know the brief history of PC lighting, you can get yourself a good RGB lighting kit to accentuate your lovely expensive hardware.

There are a few different RGB ecosystems, this means that certain RGB components work with different software. Whilst many come with their own, especially cheaper ones, more expensive parts will usually be part of a bigger ecosystem such as ASUS’s Aura Sync.

If you are someone that would like to keep all of your RGB lighting within one programme, it is important that you choose a kit that supports your RGB ecosystem of choice.

It is also possible that your RGB kit comes with no software whatsoever, this is because many choose to simply be powered by a Molex and then controlled with a remote. 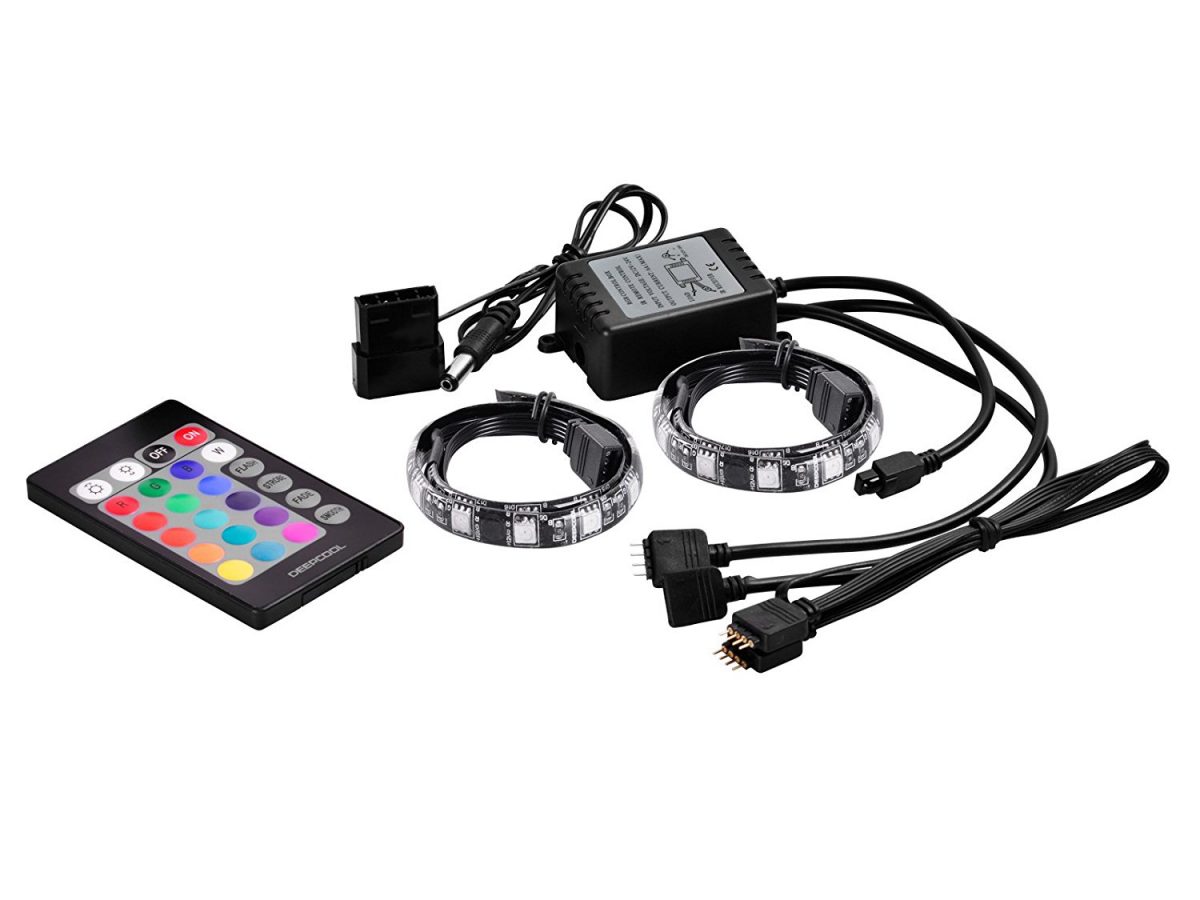 For just $17 you can get yourself a functional RGB lighting system in your PC. The RGB350 from DeepCool is only slightly more expensive than single coloured LED strips.

Whilst the RGB350 will not work with any of the fancy RGB ecosystems currently used today, you can simply control the RGB strips through a remote. The RGB350 is simply powered using a Molex and then placed wherever you please.

There are a few different effects that you can use on the RGB350 but it is worth keeping in mind that each individual strip can only do one colour at a time, each LED is not addressable, so there aren’t many flashing smooth colour transitions. On the RGB350 you can control the brightness, colour, and lighting pattern (either a flashing, breathing or skipping effect).

For just $17 you really can’t go too wrong with the DeepCool RGB350, sure it doesn’t have many of the flashy features that higher end products do, but it is remote controllable and it just works. If you are looking for a simple LED strip to light up your PC without putting a big dent in your wallet, the RGB350 is a great choice. 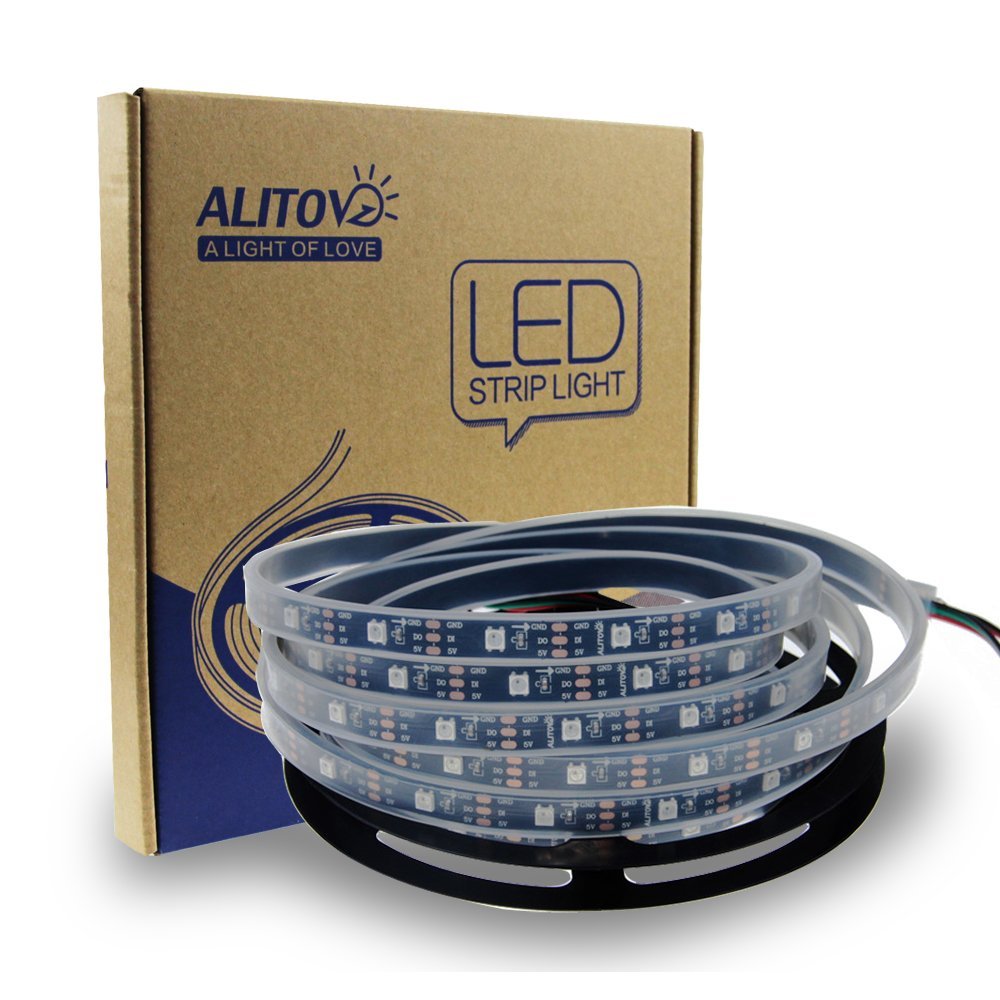 For those that want the absolute best lighting capabilities this offering from Alitove is the choice for you.

It isn’t made with PC cases in mind, that is why you don’t have to pay the premium over RGB strips that are marketed towards gamers. For $25 you get 16.4ft worth of RGB LEDs to play with. Along with that though, if you want use to use these in your PC you are going to have to pick up a controller and an external power supply.

This isn’t ideal, but if you really want the absolute best in lighting effects and brightness, the Alitove WS2812B cannot be beaten.

The strips can be cut to length, so you should have plenty of LEDs left over, even if you have a very big case.

The lighting effects are essentially endless, it depends on how far you want to go with it. As each LED is addressable you can simply buy a controller that comes with many pre-made effects, or if you really want to go all out, you can use something like an Arduino to program something a little more complex and to your own personal liking.

The Alitove WS2812B can be as simple or complex as you want it to be, that is what makes it such a great option, though if you just want a simple plug and play option, this isn’t for you. For those that really like to push the boat out, this offering cannot be beaten and at a fraction of the price too. 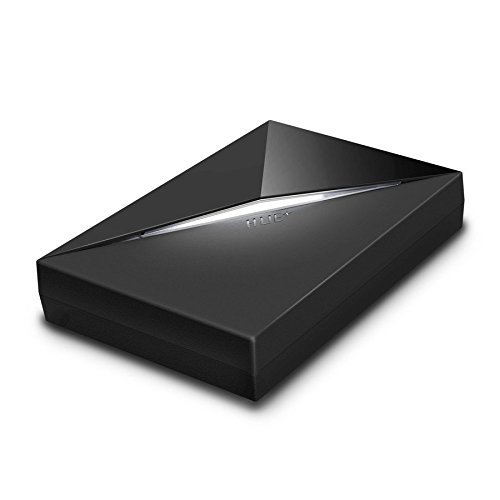 The Hue+ from NZXT is probably the most complete LED kit you can currently buy. It comes with a very nicely designed controller, compared to cheaper solutions that just come in a plastic box with no thought to how it is designed.

The controller simply mounts into a 2.5” drive, so you don’t have to worry about sticking it to somewhere inconspicuous in your case.

The Hue+ comes with four strips that have ten LEDs each for a total of forty LEDs. If you need more, the Hue+ can support up to eight strips. The Hue+ uses two different channels with support of up to 40 LEDs each so you can actually run different effects simultaneously. A nice feature that isn’t really available elsewhere.

The Hue+ has a huge number of different lighting effects, its most interesting ones are its dynamic ones. You can choose for your Hue+ to change colour based on component temperature or even framerate in game. It also features an audio mode that flashes the LEDs in time with music. You can even create your own custom effects, perfect for those that really like to experiment.

This is all done with the included software from NZXT, which works really well. A huge plus point for NZXT as many of the competitors haven’t got the greatest utilities for these products.

The biggest issue with the Hue+ is the price, at $60 that is a lot of money for some RGB LEDs, but for those that really want the best PC focussed RGB LED strips, the NZXT Hue+ is the de facto choice. 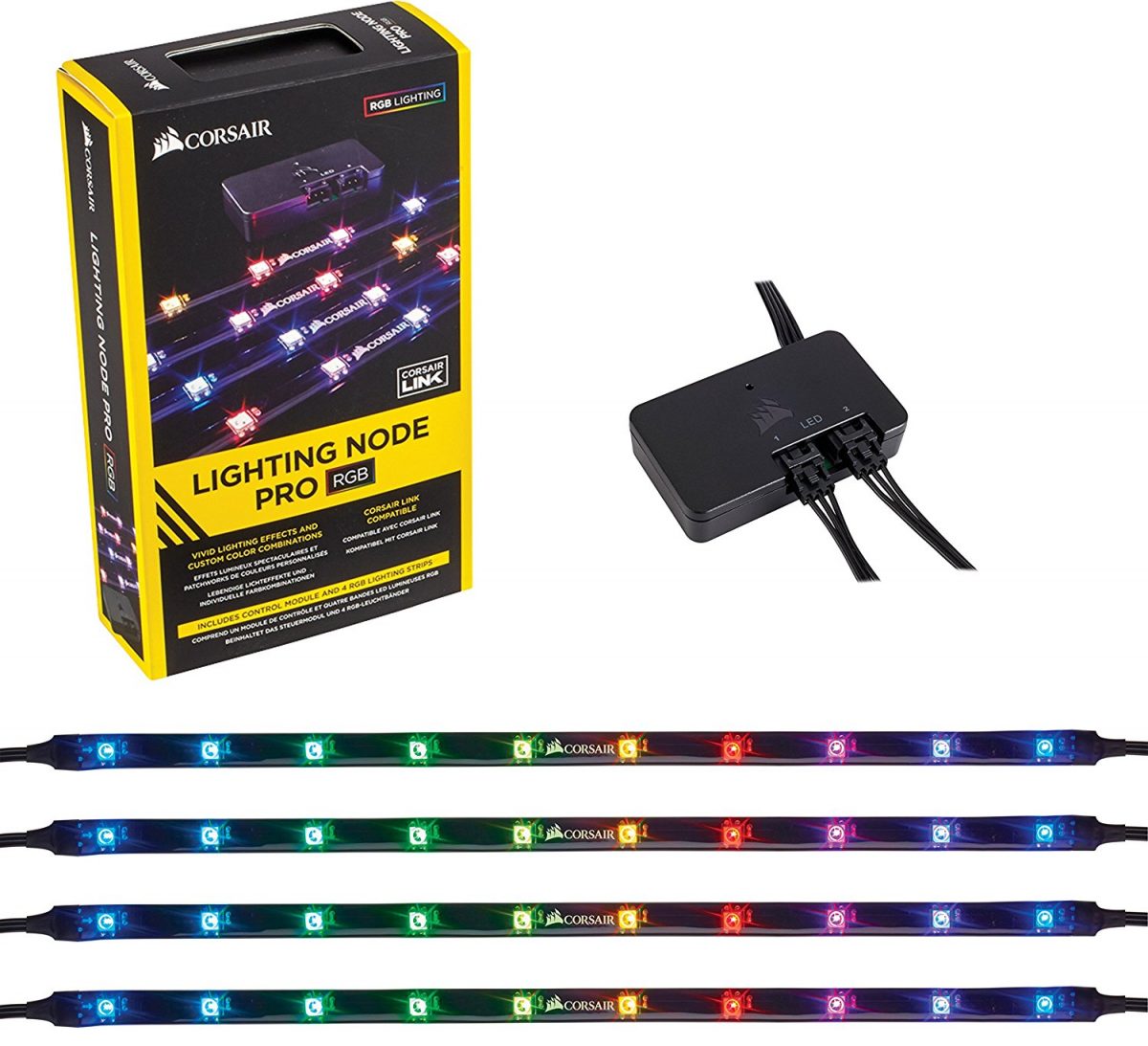 Corsair have thrown their hat into the ring with their Lighting Node Pro RGB LED strips and controller. It comes in at just a little cheaper than the Hue+ whilst also offering four LED strips and a controller for them. This offering from Corsair also has ten LEDs on each strip, so far, the two are neck and neck.

Where the Lighting Node PRO doesn’t really keep up with the Hue+ is the controller, or at least the design of it.

The Hue+ controller has clearly had thought put into it, it has a nice design, and it is easy to hide out of the way without the need for some double-sided tape. The Corsair controller does at least also offer dual channel lighting though and is simply powered by a USB 2.0 header on your motherboard.

What is great about the Lighting Node PRO is the strips themselves, or at least their mounting mechanism. In addition to the usual tape mounting solution, they also have magnets, making them very easy to mount. A great innovation from Corsair.

The software is very good too, as it takes advantage of the Corsair Link software, so you can easily control all of your Corsair components from one easy location. Very useful for those that also use Corsair RGB LED fans. This software gives you a lot of effects to play with as well.

The Lighting Node PRO is a good choice for those that already use a lot of Corsair RGB hardware, being able to easily control it all from one application is ideal. For those that don’t you may perhaps be better off with the NZXT offering but you can’t really go wrong with either one.