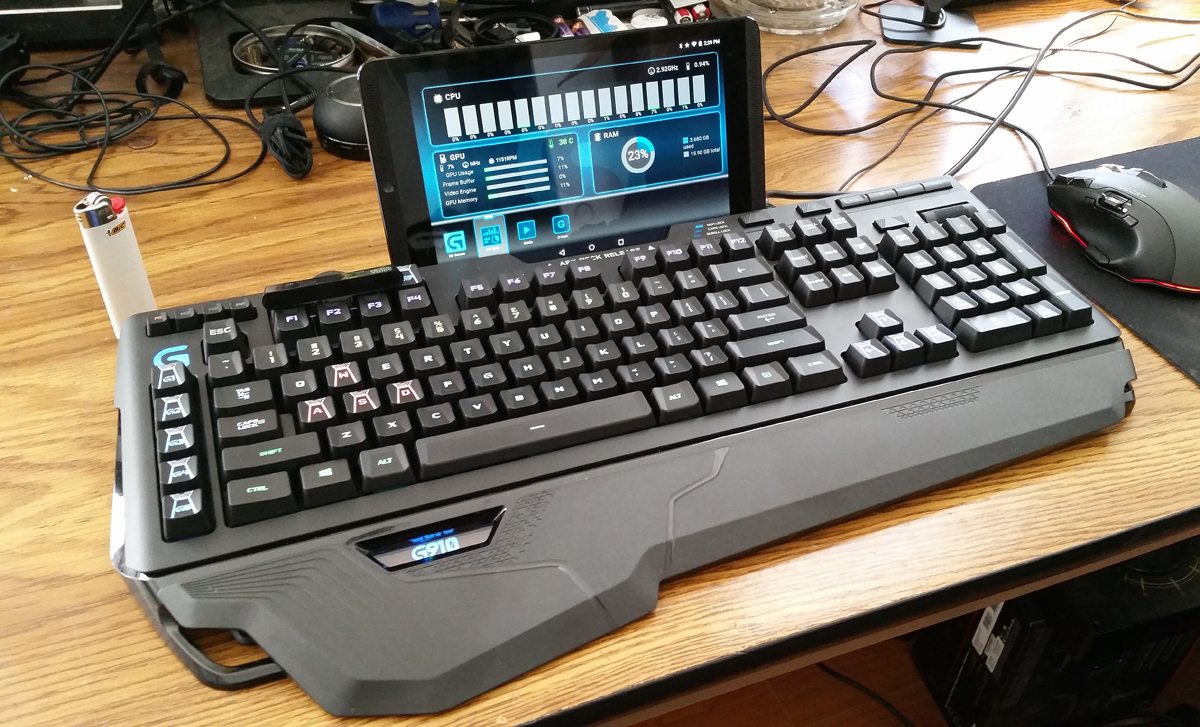 A good keyboard can make or break a PC gaming setup. Not only do high-end keyboards look better, but they’re also made to feel better and offer a range of additional features that make gaming better, including features like anti-ghosting and programmable G-keys. If you’re serious about gaming on your PC, you need to invest in a good PC gaming keyboard.

What Is a Mechanical Keyboard?

Most keyboards are made up of three separate plastic pieces with a small rubber piece underneath each key. The main disadvantage of this type of keyboard is that you don’t get a lot of feedback when you press the key down. With a mechanical keyboard, each key is connected to a different switch, so you get very noticeable feedback when you’ve pressed a key. This allows many people to type faster and press buttons more quickly and accurately when gaming.

Another huge benefit of buying a mechanical keyboard is the fact that there are numerous different switches and keycaps on the market. You have the choice between a range of switches with different feels, sounds and actuations. You can also pick up custom keycaps to put on top of those switches to give your keyboard a completely custom look, which is a bonus for PC gamers. Beyond that, gaming keyboards are generally mechanical, so you’ll often have to buy a mechanical keyboard to get access to those great features.
The one downside to mechanical keyboards is that they aren’t nearly as spill-resistant as normal keyboards unless you buy a spill-resistant model. Of course, you shouldn’t have open drinks near your keyboard anyway so that shouldn’t be a problem.

Logitech makes all sorts of different products, but its G models are focused purely on gaming. The Logitech G-series headsets are designed for powerful sound and hours of comfortable wear for long gaming sessions. Similarly, the Logitech G910 keyboard is designed to enhance your PC gaming experience, whether that means making gaming more comfortable or flat-out improving your key-press accuracy and speed for competitive games like Fortnite. Keep in mind that everybody’s results vary, and some people might not love the feel of a mechanical keyboard (or a certain type of switch) as much as others.
The Logitech G910 is an RGB mechanical gaming keyboard. It features RGB lighting which you can customize to give your keyboard its own unique look, so you can remember which keys to press. Also, Logitech’s own Romer-G switches are said to be some of the best competitors for Cherry MX switches. As far as the gaming portion of this keyboard goes, you get programmable G-keys, anti-ghosting, media controls that work while you’re playing, and ARX control to keep track of important stats and info from your PC through an app on your phone. 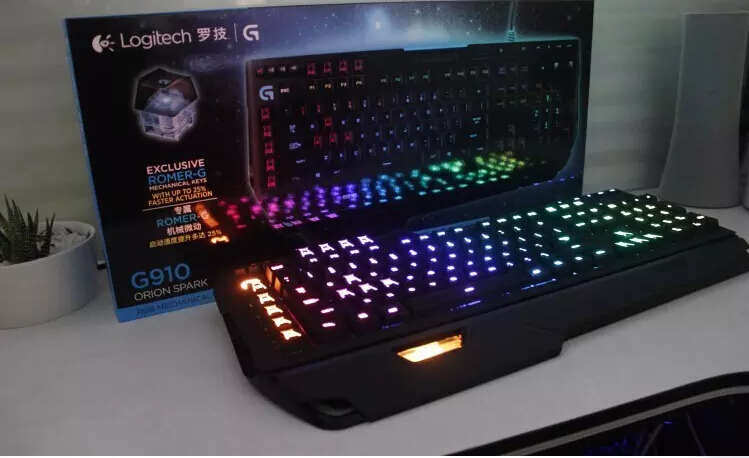 The Logitech G910 is a fairly basic gaming keyboard from top to bottom, with all the features you’d expect to see. RGB lighting comes default on this keyboard and can be customized to be more useful. In fact, there are a total of 16.8 million colors you can use with this keyboard. This is a mechanical keyboard, but it doesn’t use the Cherry MX switches you may be used to; instead, it uses a Logitech switch. The G910 is a wired keyboard and features a two-piece detachable wrist rest for added comfort. If you opt for the Orion Spectrum, you’ll get a single-piece wrist rest that’s a bit larger and more rectangular. There isn’t any real benefit to choosing one model over the other; at the end of the day, it’s all preference.

While most gaming keyboards use some type of Cherry MX switch – and many people will tell you that Cherry MX Red switches are the best for gaming – Logitech’s G910 gaming keyboard doesn’t use traditional switches. Instead, they have developed their own Romer-G switches for the G910. So, how do these Romer-G switches stack up to Cherry MX switches? For the most part, they seem like a solid replacement. Logitech claims that the Romer-G switches on the Orion Spark give it up to a 25 percent boost in actuation. This may not seem like a lot to the average user, but when you’re doing everything you can to improve at a game (or even become a professional), little things like that can make all the difference.

Of course, no gaming keyboard would be complete without solid keys and a good layout, and both versions of the Logitech G910 offer that. The two keyboards provide the exact same keyboard layout with the only differences being the shape and construction of the wrist rest and the shape of the keycaps. While the keycaps on the Orion Spark have that sort of old-school, dipped-in look, the Orion Spectrum’s keys slant toward the top of the keyboard, providing a smooth feel that some may love. At the top-left corner of the keyboard, you have M buttons for switching between different macro profiles. To the right of that are four of the nine G-keys, while the other five run vertically down the left side of the keyboard. The center of the top of the keyboard features a dock for your phone where you can set it up to use ARX controls. At the top-right corner, you’ll find the dedicated media controls.

Honestly, one of the most disappointing parts about the Logitech G910 is its design. The keyboard appears to be made of mostly plastic, and since Logitech doesn’t mention anything about it, we’re assuming that’s the case. Not only does this give your keyboard a cheap look that you’d expect to see in a lower-quality keyboard, but it also makes it much more prone to breaking in the future. Conversely, Corsair makes many of its keyboards from aircraft-grade aluminum for better durability. The G910 keycaps definitely have a nice look to them but the fact that there is some deviation from the default look might be a bit of a turnoff for some. However, you can always buy a new set of keycaps to install on your keyboard, so it’s not a big deal.

As far as the price of the Logitech G910 gaming keyboard goes, you won’t find many more expensive gaming keyboards on the market. The G910 is , whether you buy the Orion Spark or the Orion Spectrum version, isn’t absurdly expensive for a gaming keyboard, especially one that combines RGB lighting, G-keys, and switches that are supposed to be faster and smoother than Cherry MX Red switches. However, a keyboard like this simply may not be worth the money to a lot of users.

The Logitech G910 certainly isn’t a necessary upgrade for everybody, but it’s not a waste of money, either. You might prefer to invest in one of the popular Corsair gaming keyboards, or even a keyboard from another brand, but you won’t find a significantly better deal than the Logitech G910.

How the Logitech G910 Compares

The Logitech G910 is one of the best gaming keyboards on the market when it comes to features. However, the most important part of a gaming keyboard is how it actually feels, so a lot of how you react to the G910 will come down to how you feel about its Romer-G switches. If you like the feel of the switches used in this keyboard, you’ll love using its G-keys and RGB lighting to enhance your gaming experience even more.

The Corsair K70 RapidFire is designed to give you a super-fast feel with all the other basic features you need in a gaming keyboard, but there are a few things missing.

Switches: This keyboard uses Cherry MX Speed switches which are designed for a faster feel than Cherry MX Reds, so it’s great for gaming.
G-keys: Unfortunately, there are no G-keys on the Corsair K70 RapidFire, so you’ll have to do everything manually.
Wrist rest: A built-in soft wrist rest makes gaming and typing more comfortable, even after extended sessions.

While the Das Keyboard Prime 13 is more of a professional keyboard than a gaming one, its Cherry MX Brown switches still make it a viable option.

Switches: The Das Keyboard uses Cherry MX Brown switches for a soft, tactile feel.
G-keys: There are no G-keys on this keyboard since it isn’t designed specifically for gaming.
Wrist rest: If you want to use a wrist rest with the Das Keyboard Prime 13, you’ll need to buy one separately since this keyboard doesn’t come with a built-in wrist rest.

Razer’s entry into the gaming keyboard market is predictably great, but the lack of Cherry MX switches in favor of Razer switches may be a serious drawback for some.

Switches: Instead of using Cherry MX switches, the Razer BlackWidow Chroma V2 uses Razer yellow switches which are made for silence.
G-keys: There are five macro keys on the left side of the Razer BlackWidow that are used for mapping functions.
Wrist rest: A soft wrist rest keeps your hands comfortable even after long gaming sessions.

If you want everything the Corsair K70 RapidFire has to offer with G-keys added on, the Corsair K95 RGB Platinum is your best bet.

Switches: The Cherry MX Speed switches used in the Corsair K70 are said to be some of the fastest switches on the market.
G-keys: This keyboard has six programmable G-keys running down the left side.
Wrist rest: A firm wrist rest with a soft finish gives your hand support without being too rough.

The Logitech G910 isn’t for everybody. Some people want nothing more than a nice gaming keyboard with Cherry MX red switches, while others love the aluminum construction of some of the more expensive Corsair keyboards. However, you can rest easy knowing you’re getting a quality gaming keyboard if you buy the Logitech G910. Its plastic construction may not be the best in terms of style or durability, but the Romer-G mechanical switches, RGB lighting and G-keys give you pretty much everything you need in a mechanical gaming keyboard for less than $200.